Shortly after Brandel Chamblee noted on Golf Channel’s “Live From the US Open” show that Phil Mickelson had taken “a flamethrower to the very PGA Tour that provided a great stage for you to amass unimaginable wealth,” it became abundantly clear Chamblee had his very own flamethrower in the form of his carefully crafted words. He aimed it at Mickelson and other supporters of the Saudi-backed LIV Golf league.

Chamblee has never been shy to share his opinion, but he arguably has been at his most outspoken in addressing the raging war between the PGA Tour and LIV Golf.

Just last week, Chamblee said the debut of LIV Golf near London made him “want to puke.”

“When it comes to the richest sports stars in the world, Phil Mickelson is 11th. He’s ahead of Kobe Bryant, he’s ahead of David Beckham, he’s ahead of Kevin Durant, he’s ahead of Lewis Hamilton,” Chamblee said. “You’re talking about him being ahead of icons in sports that are far more popular worldwide than the game of golf. And yet why is it that golf has four of the highest paid athletes of all time? Why is it that Phil Mickelson is 11th, in terms of the stratosphere he does occupy, as an athlete … that athletes who have made less money than him but play a sport that is widely more popular? Why is that? It’s because of the image of the golfer.

“Because of their independent-contract nature. Because they show up and, generally speaking, play a game that is self-governed and self-policing. It is a game of integrity. It’s because corporations want to align themselves with these players. It’s because of the philanthropic aspect of the game of golf.

He concluded: “This is one of the saddest days in the history of golf. Watching these players come together for money and show to the world … they are showing us that they are the greediest, most self-serving, self-interested, willfully blind players in the world of golf today.”

As far as I know, it’s never happened that an athlete has been kicked out of their Hall Of Fame but both Norman & Mickelson should be removed from the Hall Of Fame. They’ve dishonored the game & they threaten to destroy the game that they have both so enormously profited from.

In short, Brandel gonna Brandel and he isn’t pulling any punches. Chamblee picked up where he left off Monday during Golf Channel’s “Live From the US Open.” He directed much of his vitriol at Mickelson, who reportedly jumped to the Saudi-league for a reported $200 million.

Of Mickelson’s performance in his pre-tournament press conference, Chamblee said: “He’s suffering the consequences of a decision he made that some he was taking a flamethrower to the PGA Tour. By my count there were 22 questions and not a single question about being the oldest major champion of all time, not a single question about trying to complete the career Grand Slam. It was all about his decision to join a league that I think many view as an attempt at a hostile takeover.” 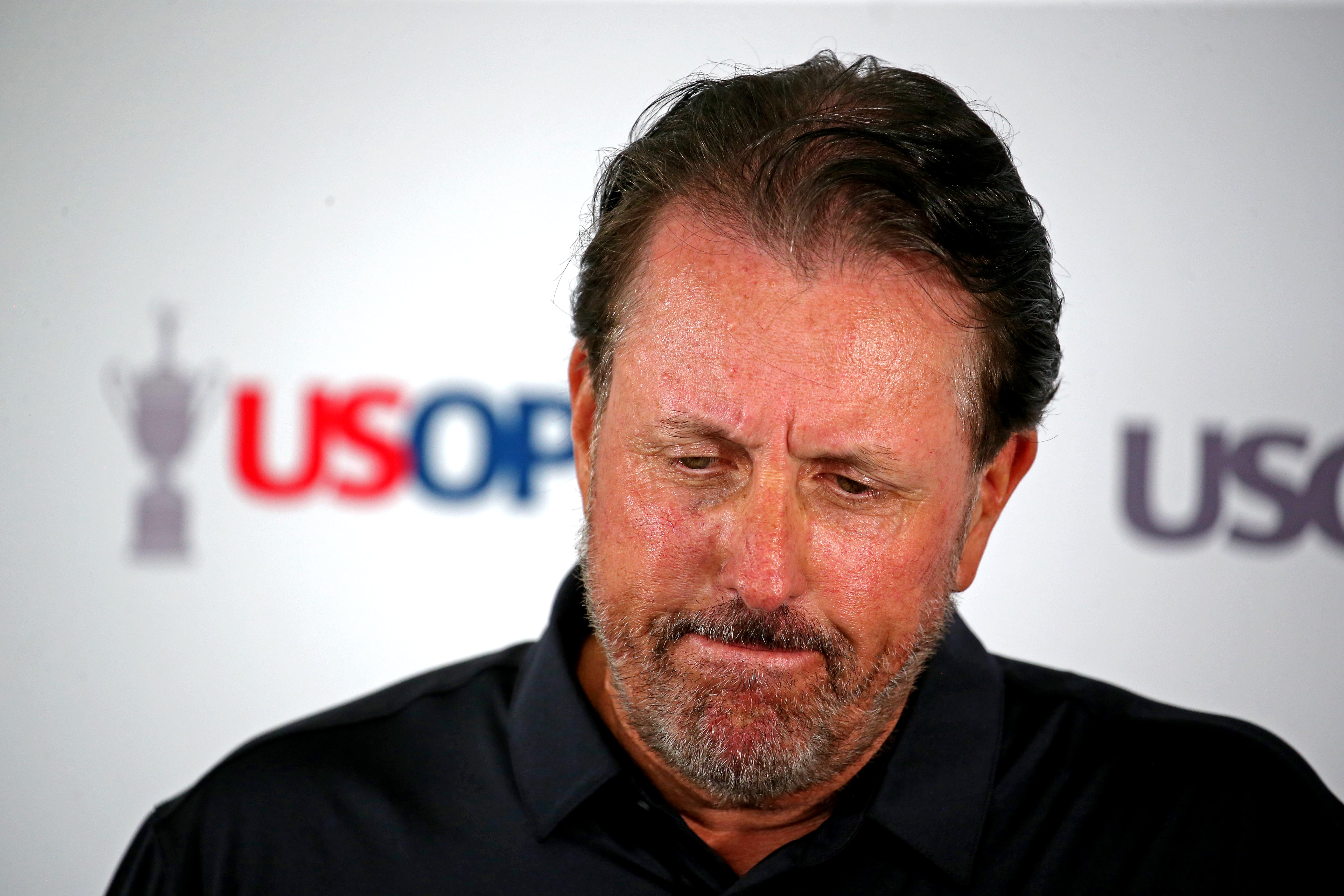 Phil Mickelson speaks in a press conference at the US Open at The Country Club. (Photo: Peter Casey-USA TODAY Sports)

Chamblee noted that the Mickelson who broke on the scene with his “pop collar, saccharine smile and playing with so much joy for the game of golf” had changed. Chamblee highlighted an incident dating to the 2014 Ryder Cup that gave golf fans an early peek at the character of a man who would be willing to get into bed with people who that man described as “scary mother——.”

“He’s been pretty darn successful in the media center at manipulating to whatever extent he can, but there have been moments over the years where he’s been atrocious in the media center. Most notably in 2014 at the Ryder Cup, where we got I think a real glimpse into who Phil Mickelson is. Machiavellian? Sure,” Chamblee said. “Blaming Tom Watson for his failures in the Ryder Cup, and then when asked after literally denigrating one of the greats in the game in front of the whole world by a media member, why would you do such a thing? He almost acted incredulous and said, ‘How could you take what I just did as denigrating Tom Watson?’ Everyone in that room knew what they were seeing. It was disingenuous at best, but duplicitous more accurately describes it.”

“Nothing I’ve seen from Phil Mickelson from that moment to this moment has changed,” Chamblee later added. “It turns out when you’re trying to sell a lie, it’s hard to talk with a great deal of comfort and ease.”

Chamblee didn’t spare other defectors to LIV, including Bryson DeChambeau, calling out his inconsistent comments and giving the 2020 US Open champion a tongue-lashing for the ages. 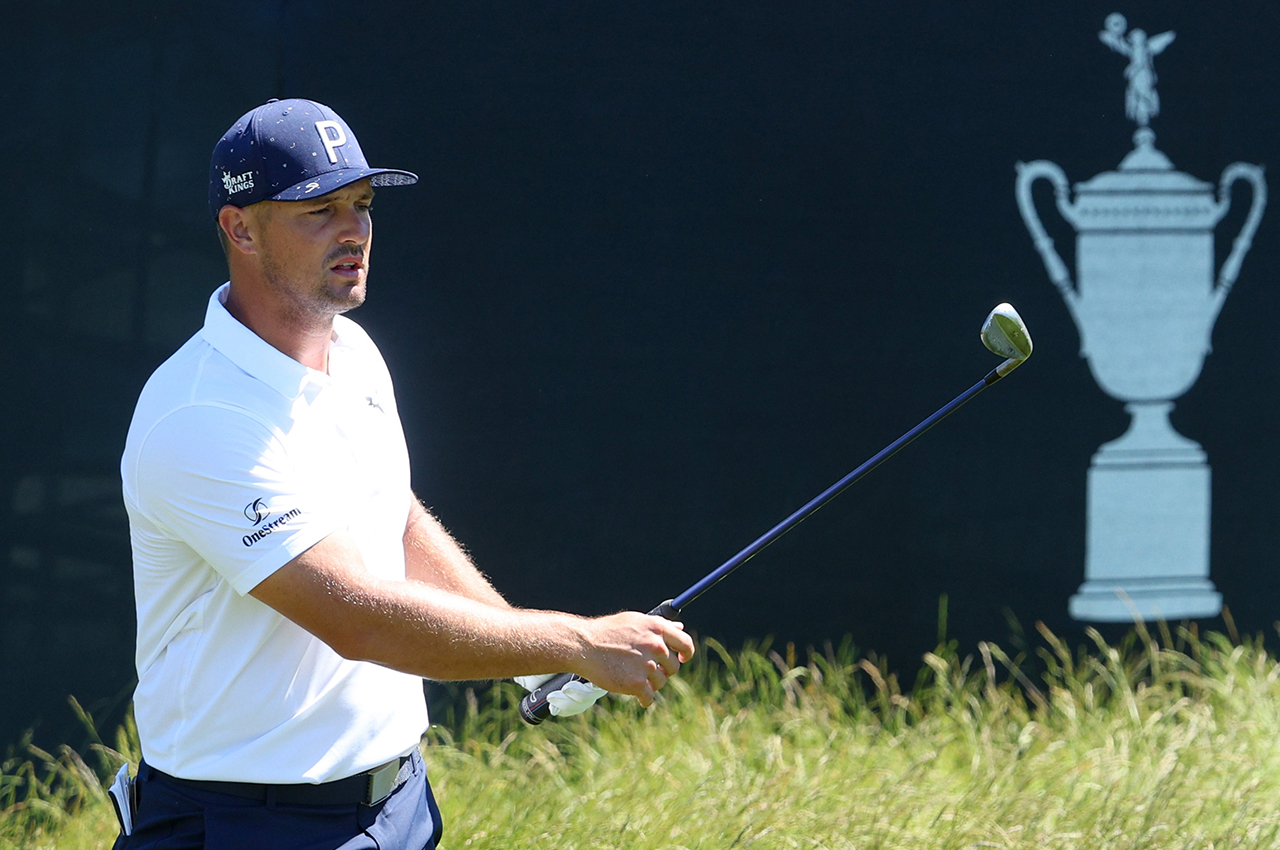 Bryson DeChambeau plays a shot during a practice round before the US Open at The Country Club on June 14, 2022 in Brookline, Massachusetts. (Andrew Redington/Getty Images)

“More recently, he’s been talking about how he’s found God and become a Christian and I just wonder how he squares accepting money from a regime that is anti-Christian,” Chamblee said. “You can’t pull a Bible out in Riyadh without going to jail. They are misogynistic, they are anti-Semitic, there’s no freedom of speech. He talks about his charities, about going home to do things, but meanwhile he’s taking money from people who oppress the things he purports to stand for, which is philanthropic enterprises. That’s where the money is coming from. He says he’ll have a new legacy. He absolutely will have a new legacy, and it will be tarnished as a 100-year-old silver trophy that has been untouched up in a closet.”

That is the type of commentary from golf media directed at a player that is sorely missing. Later, when Jim Gallagher Jr. observed that everyone has a price, Chamblee circled back to that comment and said, “I’d like to think not. I’d like to think there are plenty of people with enough money to say no. There are loads of people who have said no. … Rory (McIlroy) has said no. Justin Thomas has said no. I don’t believe $200 million, I don’t think $500 million, I don’t believe a billion dollars would get Rory to say yes. I don’t think he will.

“It’s never going to happen there. Not certainly under the rule of MBS, Mohammed bin Salman Al Saud. He couldn’t be more oppressive. He couldn’t be more in favor of centralizing power within himself to an extent that has never happened in Saudi Arabia. There’s no evidence of reform in that country. Zero, other than his words, which were about as empty as Phil’s were in his press conference.”

That is as good as it gets from a golf analyst giving a group of pampered, well-compensated golfers some grief for selling out and supporting sportswashing.

Chamblee also gave equal praise to the high drama and sporting battle that was the final round of the RBC Canadian Open between eventual champion Rory McIlroy, Justin Thomas and Tony Finau.

“It’s one of the most significant wins in the history of the game,” Chamblee argued. “It was almost as if they took it upon themselves to say this is what the highest pursuit of this sport looks like, this is what great competition looks like. It was almost like they said to themselves not on our watch, we’re going to put on one heckuva show to remind you of just how competitive the PGA Tour is and has been for all these years.”

“Live from the US Open” is just getting started this week, but Chamblee already has shown he’s prepared to dish on the hard topics that are rocking the golf world and he’s not afraid to call it like he sees it.