We asked Iain Macintosh to manage Newcastle United on Football Manager 2022 and eight months later, he’s still going. We’re midway through the fourth season and he hasn’t managed to get himself sacked yet.

So, how are we set for the visit of our bogey-side Stoke City? Well, Leon Bailey and Axel Disasi are properly injured, Andrea Belotti is suspended, Sean Longstaff and Wilfried Singo are carrying knocks and I’m told that Merih Demiral, Kieran Tierney, Ivan Ilic, Josko Gvardiol and Benjamin Sesko all need to be rested.

“At this rate, Bouldy,” I tell my assistant manager, “we’ll need to re-register you as a player!”

Bouldy’s back straightens and his chin stiffens.

“I wouldn’t let you down, boss,” he says, with a faint quiver in his voice. “What I might lack in pace, I more than make up for by being a truly horrible bastard.”

I’m certainly intrigued by the prospect, but given that Bouldy is not far from getting his free bus pass, I think it’s better to ask some of these tired players to push through the pain barrier.

So it’s a mix-and-match team with a handful of tired legs saved for Chelsea in three days. My one major concern here is Tyrese Campbell, who always seems to score against us. Seconds after kick-off, I tell Demiral to sit deeper and cover the space, that’ll sort him. 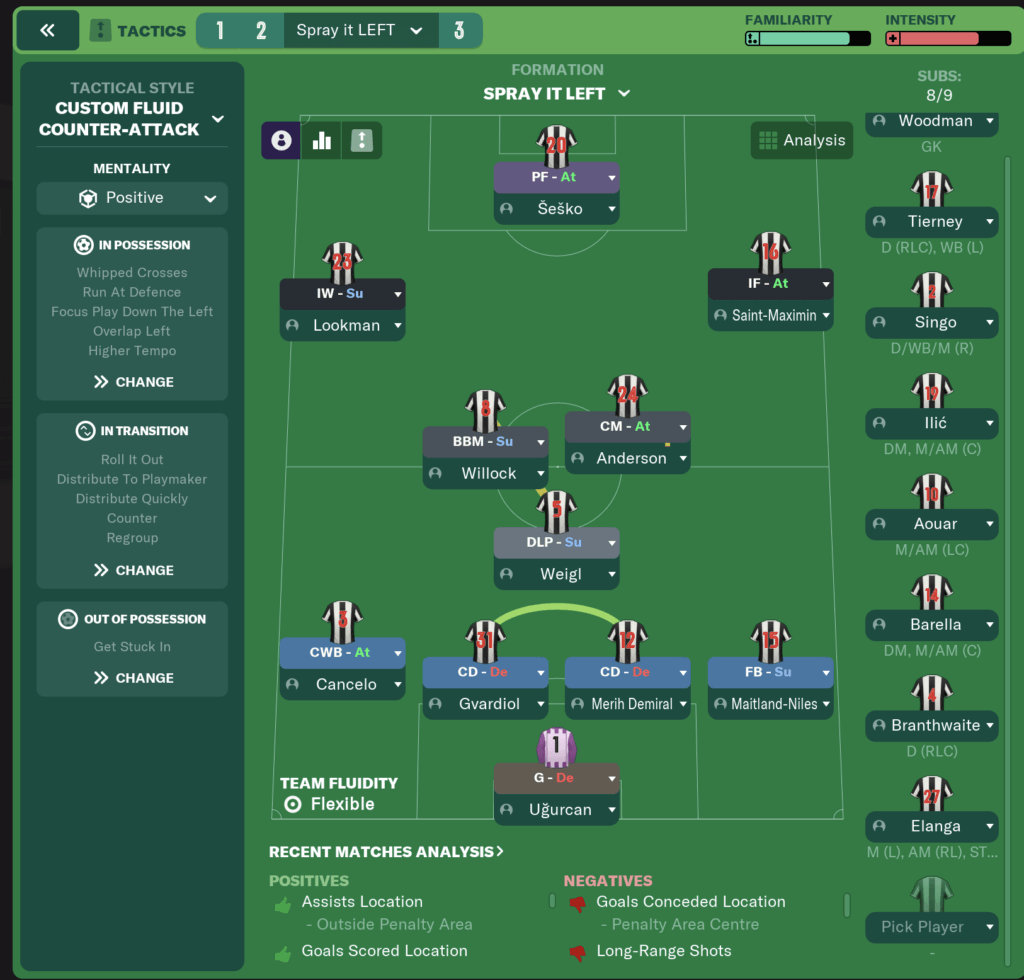 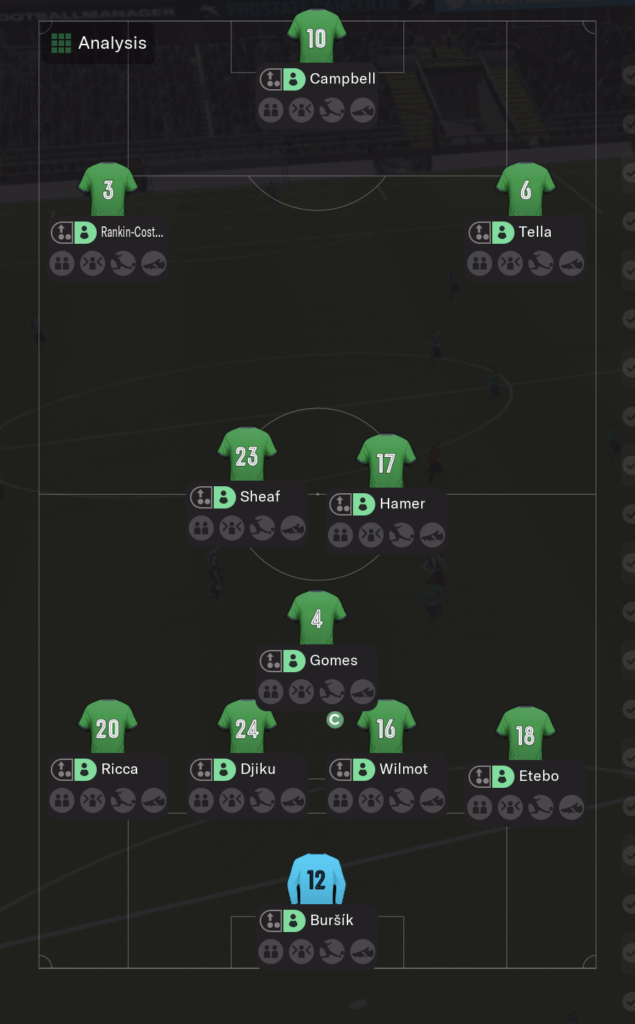 The opening exchanges are tipid at best, but slowly we find our way into the game and start to take control. A series of crosses and corners are carelessly headed over the bar into the fans, but that’s OK, we have plenty of time.

And then an attack breaks down, Stoke counter, the ball is slipped through to Tirese bloody Campbell and we’re 1-0 down. 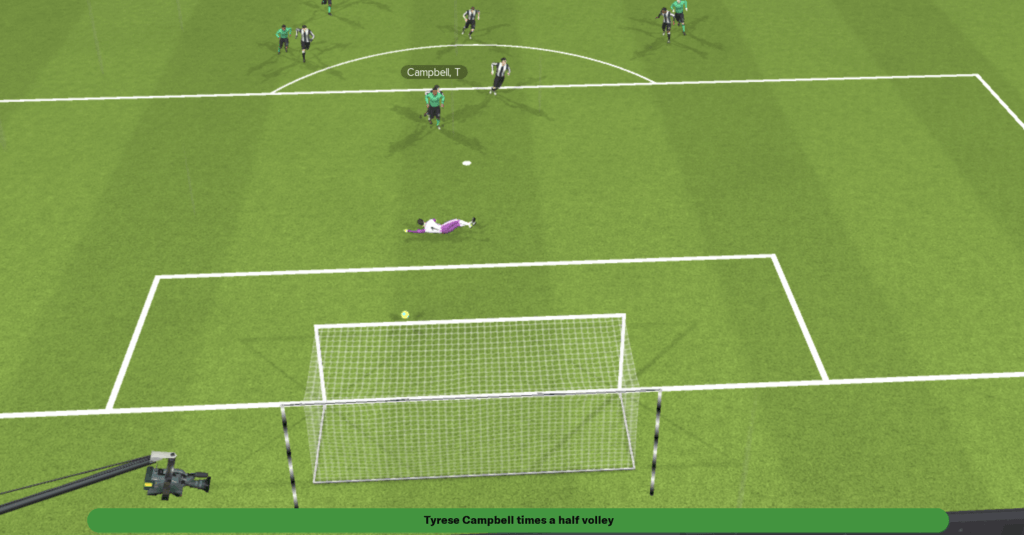 But we’re still playing well and I assure the players at half-time that there’s no need to panic. And then straight after half-time, Allan Saint-Maximin is felled in the box and we have a perfect chance to equalise. Alas, our regular penalty taker Belotti isn’t on the field. Nor is second choice Nicolo Barella. Nor is third choice Bailey. And so up steps Ademola Lookman. He’s a thoroughly decent player and I’ve seen him score from the spot in the past. But he wasn’t up against Joe Bursik in the past. The Stoke stopper makes an incredible save. Not his first of the day and, sadly, not his last. 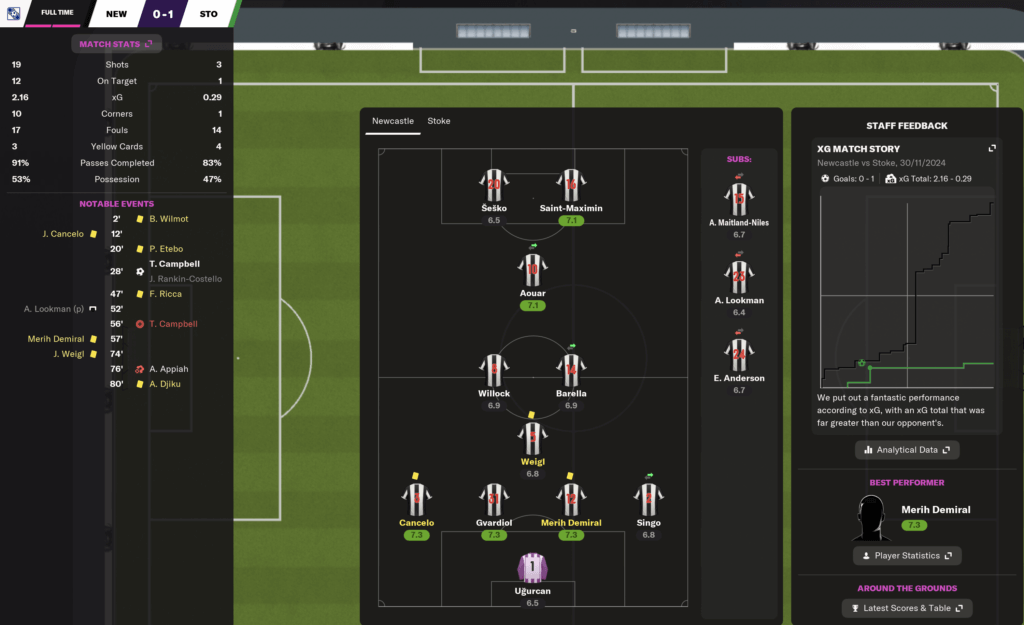 Now the idea was to rest some players and come at Chelsea with a fresh, confident team, but both my back-up defenders are out, so Gvardiol and Demiral will just have to push through. I hate playing Chelsea. Campbell’s scoring record against us is bad enough, but I’m fairly sure that Romelu Lukaku has scored against us in every single game for nearly four years. Even at our best, he always gets on the scoresheet, so I don’t see how two exhausted defenders are going to stop him today. 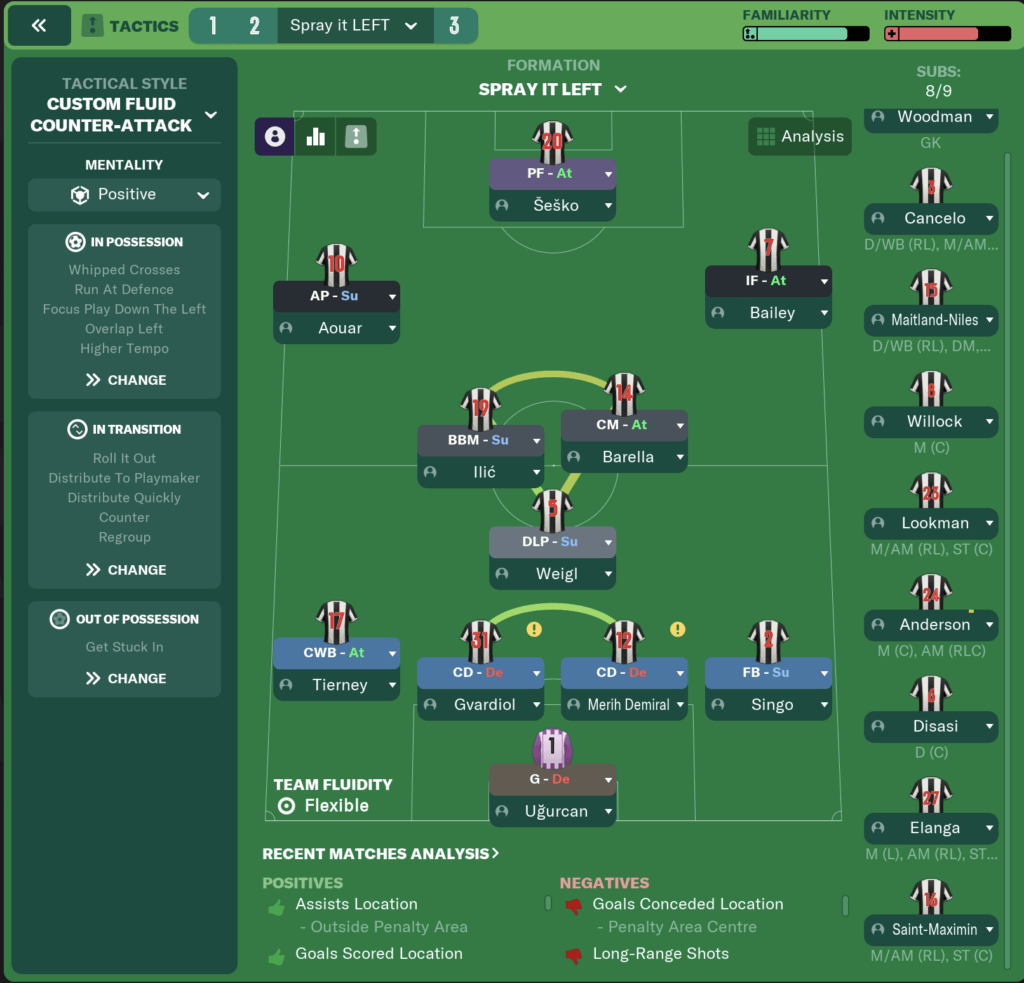 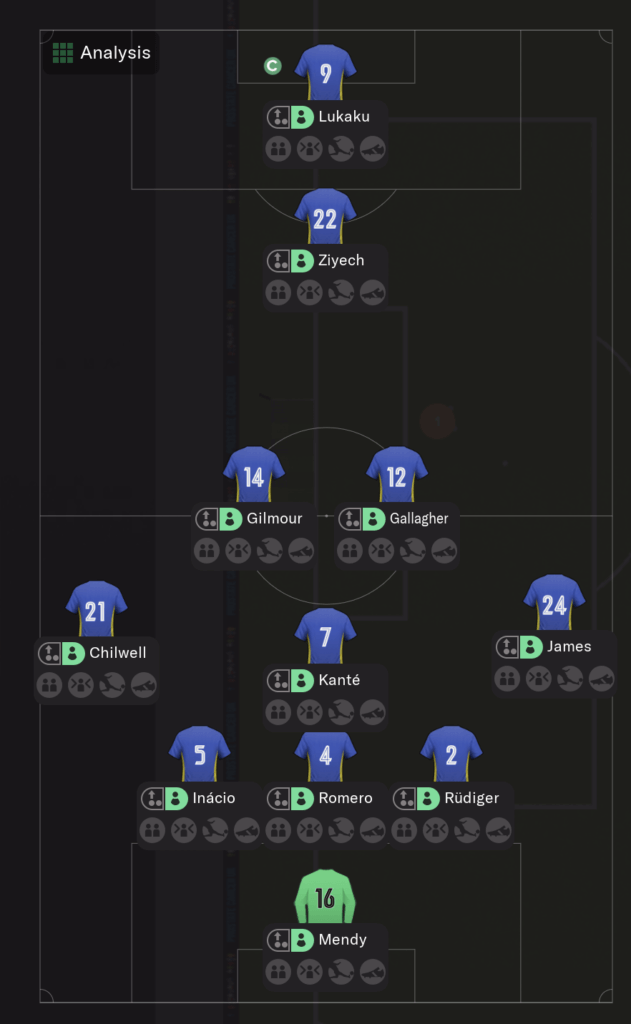 Against all expectations, we look really for the challenge. Our tails are up, we’re moving the ball nicely and we score a fine goal when Singo and Bailey link up on the right. The lead lasts just three minutes. First Ben Chilwell scores from a near post corner and then Lukaku, of course, lashes one in from the edge of the box. To make matters even more chew-you-own-face-off frustrating, we lost both Sesko and Tierney to injury before the break.

But despite everything, we bounce back. Singo lofts in a free kick and Houssem Aouar sticks it in the top corner on the volley — 2-2. Then Demiral goes close when he heads off the crossbar from a corner. And then, with nine minutes left, we win ourselves a penalty and this time, we have a specialist on the pitch. Barella makes no mistake. 3-2.

We are utterly exhausted, the players look dead on their feet, but we throttle back, use Anthony Elanga as a fleet-footed outlet of resistance and we hang on for a win that, in retrospect, we actually seem to have deserved. 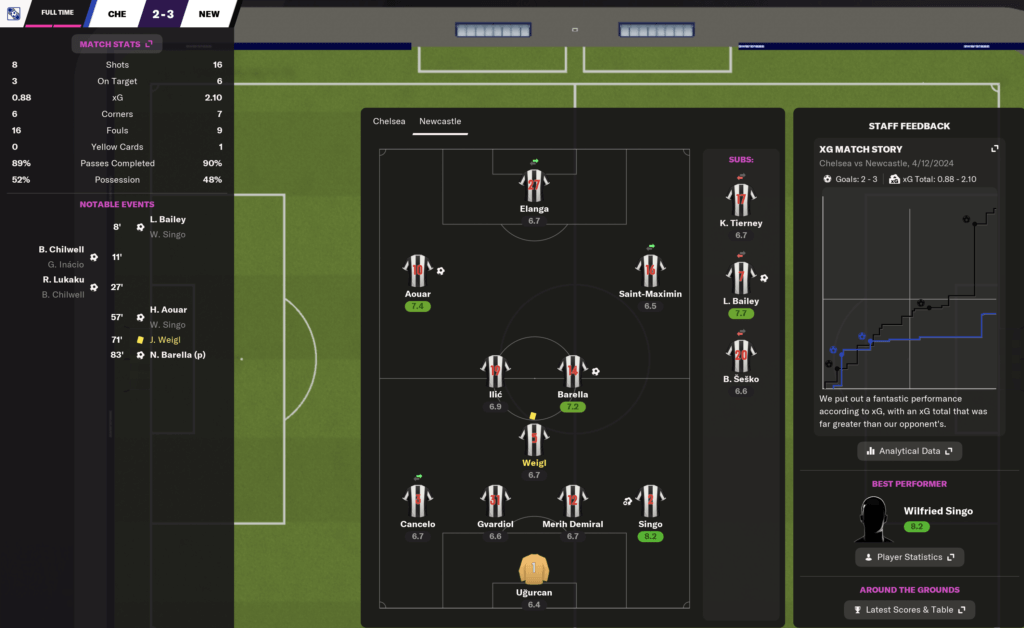 But it comes at a cost. The dressing room is now a house of pain. Two injuries, two suspensions, three players begging for rests. And there’s nothing I can do about it. I just have to rouse them one last time for a trip to Ange Postecoglu’s Leeds and hope there’s enough in the tank to get through 90 minutes. We’ve got Paris Saint-Germain in midweek and we’re absolutely ruined. Demiral will get the benefit of a break here. Gvaridiol and Sesko, who hasn’t scored since October, will just have to be brave little soldiers. 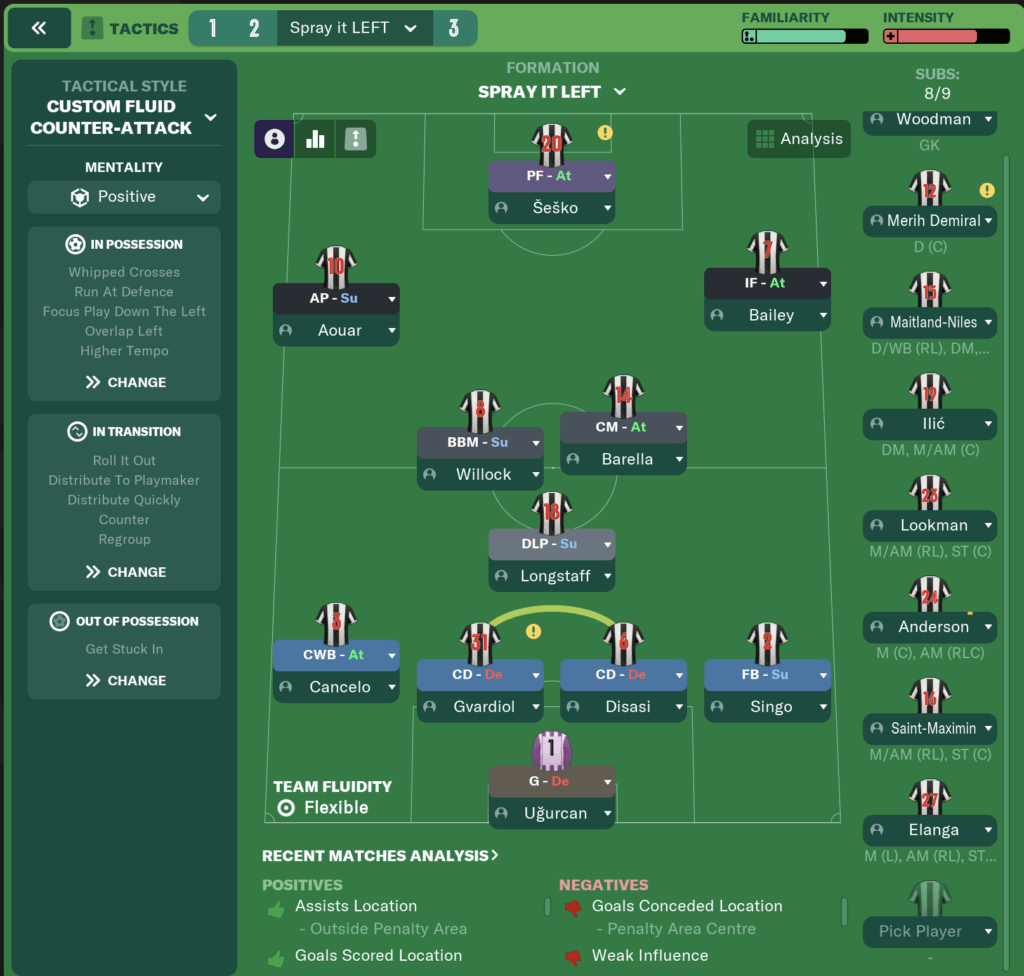 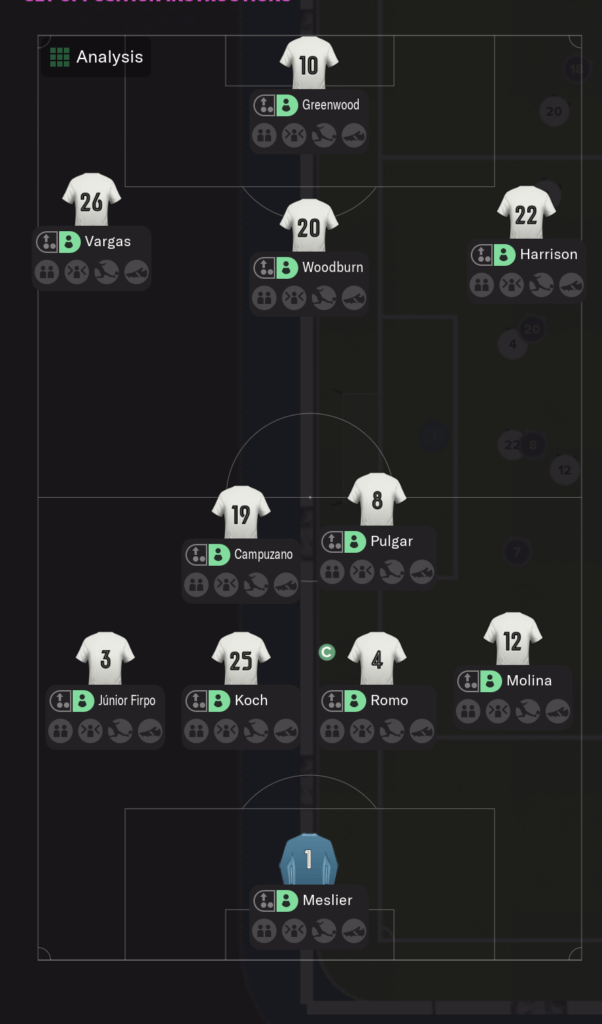 Astonishingly, Leeds seem to be in worse shape than us. Which is odd, given that they’ve won their last three games on the spin. We should score when Bailey is one on one, but we do score from the resulting corner through Disasi. Leeds barely put a shot on or off target. But even before half-time, you can see how much danger we’re in. Two players are asking to be taken off in the 40th minute. By the 55th minute, it’s six players. I make a triple change on the hour and we continue to make good chances. Elanga puts one just past the post, Elliot Anderson draws another fine save out of Illan Meslier.

And then with six minutes left, on one of their few forays forward, Sam Greenwood scores the equaliser because of course he bloody does because this season is essentially a long line of journeyman strikers queuing around the corner for a chance to kick me in the nuts . 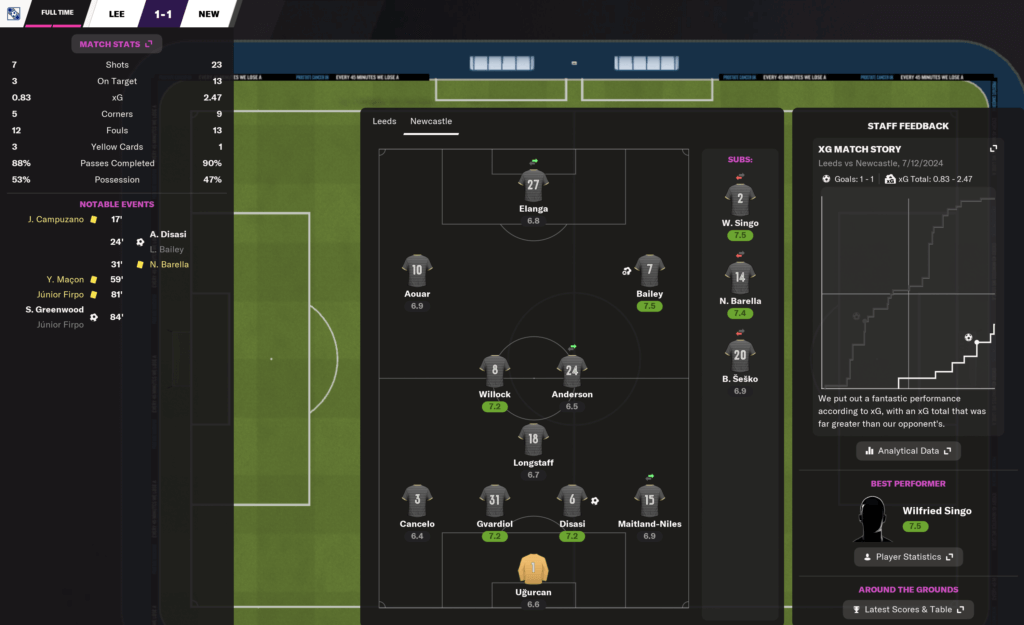 I’m sitting with Bouldy in my office staring at my whiteboard. It’s PSG away tomorrow, everyone is knackered and I don’t care about the result, but I still need to put eleven men on the pitch and that’s proving tricky.

“Could we play wee Jimmy Hurst, do you think?” I say.

“He’s not ready,” says Bouldy. “And I don’t think he’ll ever be ready. He was the brightest hope from a poor crop of new generation players, but if anything he’s gone backwards this season.”

“What about Kyle McDonagh?”

“I could play Elanga there? Who knows, maybe his pace will be useful?”

“I have a better idea,” says Bouldy, and he pulls a piece of paper out of his pocket and passes it across the desk to me.

“It’s my player registration form. I did it last week just in case this injury crisis got any worse.”

“Yeah, they wouldn’t accept anyone older than 40, so I had to offer them some ‘alternative facts’ if you will.”

“But surely someone will notice?”

“You’d be surprised, boss. No one ever checks these things. Come on now, stop making excuses, throw me in, I’ve still got what it takes. The first yard is in my head.”

“Where are the rest of them though? They’re certainly not in your legs. Christ, Bouldy, every time you bend your knees it sounds like someone’s making popcorn. Besides, this is a Premier League registration form. You’re not on the Champions League list, are you?”

Bouldy just stars at me for a while. Then he sighs and his entire body seems to sag. 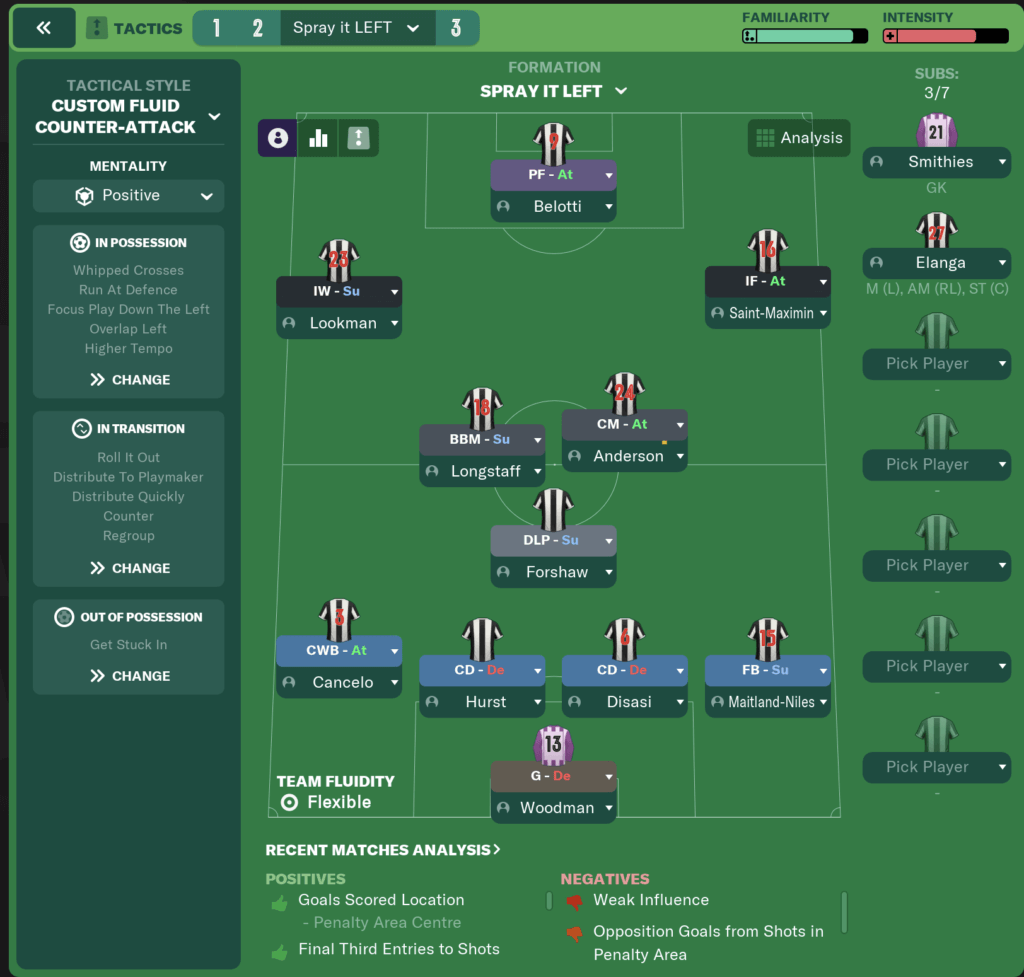 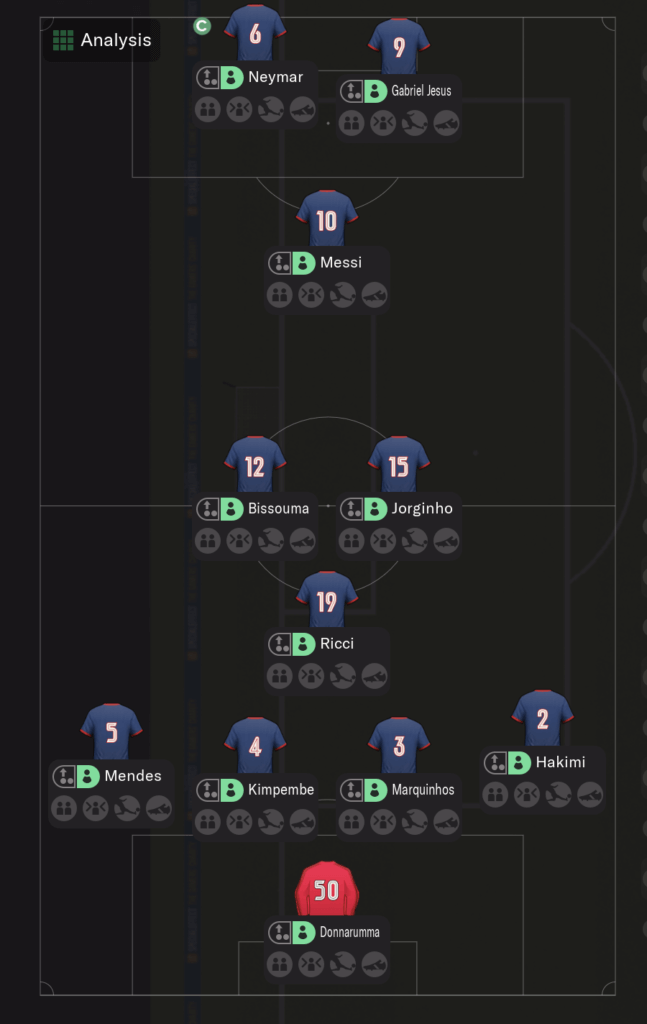 After two minutes, we’re a goal down and it looks like it could be a long night. Chucked in at the deepest of ends, wee Jimmy Hurst has taken to continental football like a duck to lava. Astonishingly, we equalise when Saint-Maximin breaks and slips one through to Lookman, who calmly makes amends for that whole Stoke thing. Offended by our temerity, Gabriel Jesus promptly scores another and our resistance seems to break. PSG would glide to victory were it not for the fact that they go to sleep at a routine free kick, fail to clear the ball and Anderson is there to score. 2-2.

With just one outfield substitute on the bench, I don’t have too many options. But we’ve got nothing to lose, so we plow on regardless. Lionel Messi, Neymar and Jesus all go close, but they find Freddy Woodman in indomitable form. And then, from nowhere, Belotti lashes one in and we’re 3-2 up. Everyone is exhausted, they’re blowing out of their bottoms, but PSG still can’t find a way through. With poor Hurst playing appallingly and carrying a yellow card, I take the unconventional decision to put Maitland-Niles in the center of defence, Elanga at right-back and we go defensive. And to our enduring amusement, the Qatari state’s sportswashing department are beaten by a selection of out-of-favour reserve players and spotty children. 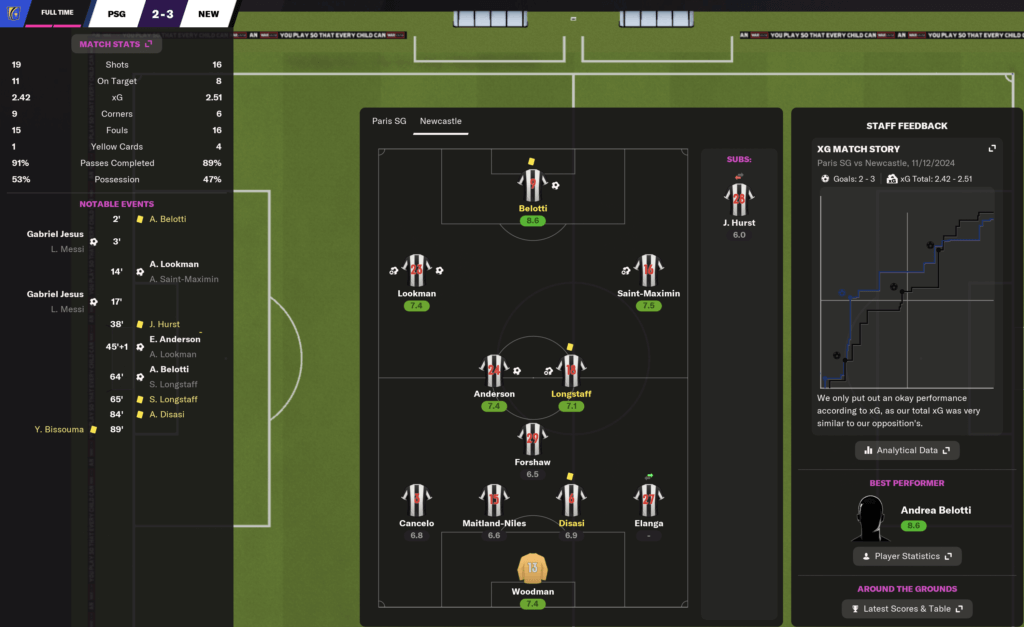 It has been a frustrating month of a frustrating season, but despite our habit of dropping very winnable points, we’re in good shape. We have finished at the top of our Champions League group and (hopefully) cast PSG into a first-round tie with Manchester City or Real Madrid. We’re still in the title race, albeit a little further back than I’d like after losing to Stoke. I am concerned by Sesko’s loss of form but boosted by Barella’s arrival as a world-class force. This lot could finish seventh or first, they could win the Champions League or crash out in the next round. And if I don’t know what’s coming next, then neither will anyone else in this division… 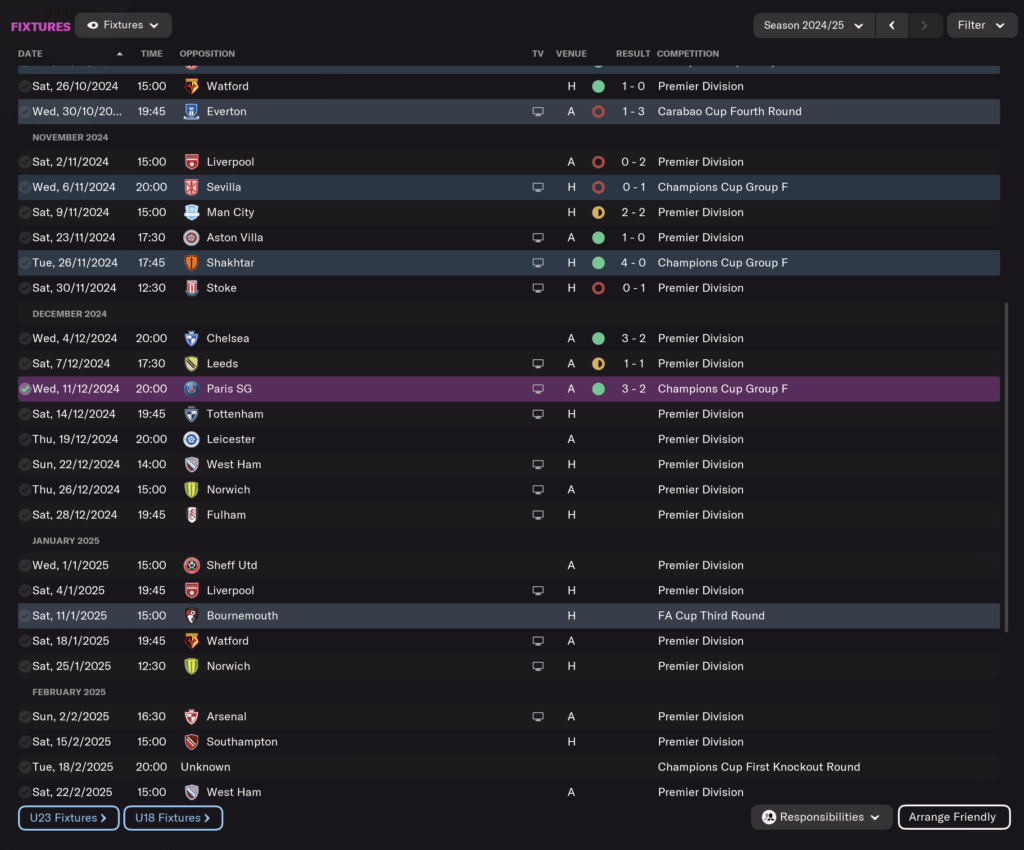 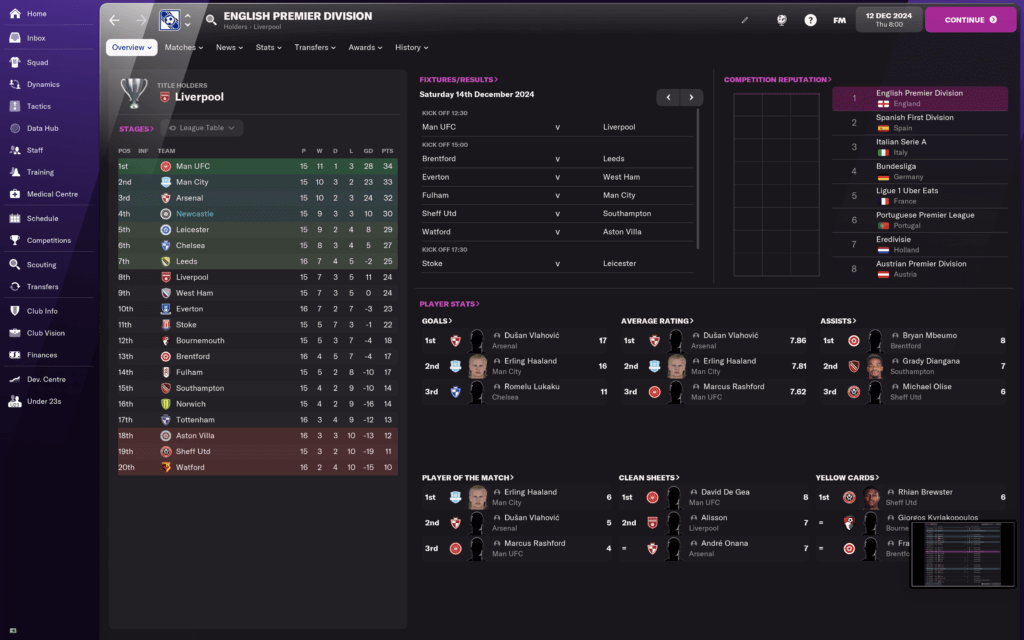 Want more on FM from Iain and his team? Why not check out his podcast — The Football Manager Show sponsored by Livescore — free on Apple, Spotify and all the usual podcast platforms, and of course ad-free on The Athletic.