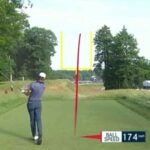 NBC’s goal-post graphic at the US Open caught the attention of golf fans.

Or, wait…is it a gimmicky eyesore?

At this week’s US Open, the NBC broadcast team rolled out a graphic unlike any before it: a rendering of a football goal post that, on a few occasions, the broadcast transposed onto the driving zone on the par-4 15th. The graphic sat snugly between trees that flank the fairway and was designed to give viewers a sense for the accuracy of tee shots through what is a tight driving chute.

Golf broadcasts aren’t known for innovation, so when new bells and whistles appear, golf fans take note. The posts were no exception, and reactions were — predictably — mixed. Jay Rigdon over at Awful Announcing called the posts “pointless fun.” But there were plenty of other opinions, too. Here’s a sampling of takes from golf fans on Twitter, spurred by the graphic’s cameo down the stretch on Sunday afternoon.

One technical problem with the posts: “converting” a field goal didn’t necessarily equate to a good drive. On Sunday, eventual champion Matt Fitzpatrick successfully knocked his tee shot through the uprights yet missed the fairway right by 30 yards.

NBC used the graphic infrequently but did employ it throughout the week. In the first round, the posts appeared when Justin Thomas was on the tee.

NBC also worked the posts into a hole flyover:

Love the graphic or loathe it, give NBC credit: it was different. Makes you wonder what the network might trot out at for its Open Championship coverage next month. Goal posts seem unlikely at the windblown Old Course, where players will try to keep the ball low.

As GOLF.com’s executive editor, Bastable is responsible for the editorial direction and voice of one of the game’s most respected and highly trafficked news and service sites. He wears many hats — editing, writing, ideating, developing, daydreaming of one day breaking 80 — and feels privileged to work with such an insanely talented and hardworking group of writers, editors and producers. Before grabbing the reins at GOLF.com, he was the features editor at GOLF Magazine. A graduate of the University of Richmond and the Columbia School of Journalism, he lives in New Jersey with his wife and foursome of kids.