Lexi Held had a job lined up before she graduated from DePaul University a couple weeks ago, but the 22-year-old former Boone County resident’s degree in marketing won’t be much use when she reports for work in September.

Held signed a contract with a women’s professional basketball team in Sweden. After her highly successful college career at DePaul, the 5-foot-10 guard drew a lot of interest from foreign teams and decided to join the Norrkoping Dolphins in a city about 100 miles southwest of the national capital Stockholm.

“For my first time overseas, I kind of wanted an environment where I would be happy and really acclimate easy with people that I know have my best interest in mind,” Held said. “And, obviously, the basketball part was important, so once I got to learn more about them I was definitely sold on going there.”

The Dolphins had three players from the United States in the starting lineup on that championship team and decided to look for more.

Held said her agent put her in touch with the Norrkoping coaching staff and they made her an offer that she accepted.

“Different teams and countries all have their own way to do it,” she said of her pro contract. “Where I’m going, I’ll have a place to live, a car, salary, food, so I’ll be taken care of.”

Held is a 2018 graduate of Cooper High School. She scored more than 2,430 points during her varsity career and finished her senior season with the state’s second highest scoring average at 28.3 points per game. 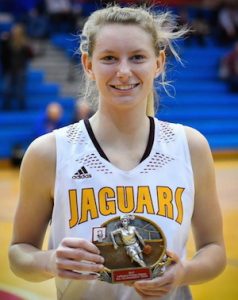 Lexi Held was named Division I Player of the Year by local coaches after her junior and senior seasons at Cooper.

At DePaul, she started 89 consecutive games over the last three seasons and the Blue Demons compiled a 64-26 record with her in the lineup. She ranks 16th on the team’s all-time scoring list with 1,578 points and fifth in 3-point shots with 238.

Both of those career totals could’ve been higher if Held hadn’t switched from shooting guard to point guard for her senior season. Her scoring average dipped to 12.7 points per game, but she averaged 5.2 assists assists a DePaul offense that posted the top scoring average (87.3) in NCAA Division I women’s basketball last season.

“It was definitely an adjustment just because I’ve always been like a scorer and on the wing,” Held said of moving to point guard. “I mean coach (Doug) Bruno didn’t say, ‘No more scoring,’ when he put me there. It was just kind of like I was able to do both, which actually helped me because now I can call myself a combo guard and that opens up a lot more opportunities for me in the professional field.”

DePaul lost in the play-in round of the NCAA women’s tournament and finished the season with a 22-11 record. A few weeks later, Held accepted a training camp contract from the Chicago Sky, last year’s WNBA champions. She spent three weeks working out with the team before she was released prior to the start of this season.

“They’re the defending champions in the WNBA so it was really exciting to be part of that and to get to know and learn from the best,” Held said.

“It gave me more confidence than anything that I can compete in that league,” she added. “You go into it not knowing what to expect and I really felt like I held my own, so I’m excited to continue to work at that. The main goal for me is to make the league, as of now.”

The first step toward that goal will be playing for the defending champions in Sweden’s premier professional league. Held will begin preparing for that next phase of her career after spending part of the summer with her older sister in San Diego.

During phone conversations with Norrkoping’s coach, Held asked what role she’ll be playing during the team’s 2022-23 season that will start in October.

“They’re looking for me to be more like a wing scorer, which is kind of what I wanted, but they also said they would like me to help out at (point guard) sometimes, which is again something I’ll totally fine with,” she said.

“The goal is I’ll go overseas and crush it and hopefully have another opportunity at a training camp back here in the WNBA next year.”