The last backhand from Steve Johnson had drifted long and Gilles Simon, graying at the temples, let loose a scream. The crowd at Court Philippe Chatrier rose as one and Simon, playing his final Roland Garros, basked in their applause.

A few minutes later, the weary 37-year-old slowly pulled the tape from his fingers and gazed down at the red clay beneath his feet. A small smile finally crossed his face as the weight of his epic achievement washed over him. In defeating Johnson 7-5, 6-1, 7-6(6) on Wednesday, the French wild card won his 500th tour-level match.

“Ah, 500,” Simon told ATPTour.com in an exclusive interview afterward. “It’s a nice number that I managed to reach it. I would have survived if I didn’t, of course. But, yeah, it’s one more achievement. To have 500 wins on the Tour, I am quite happy.”

Most Wins By A Frenchman (Open Era)

Before the tournament began, Simon – two match wins short of the milestone – reiterated that this would be his last season. He was asked by a reporter if he was disappointed not to reach the 500-victory mark.

“That’s not easy-peasy,” Simon said. “We will see. Honestly, it will not change anything in my life. Whether I reach that goal or not, it’s irrelevant.”

After dispatching Johnson, it seemed to mean more to Simon. “It’s a very long journey,” he said. “A lot of matches after 17 years on the Tour – you have good memories, bad memories, everything. I’ve been through pretty much everything. These numbers help you to understand and realise what you did.”

Countryman Arthur Rinderknech said of Simon, “He doesn’t look like the strongest or the biggest player, but at the end of the day, when I was young, I was watching him on TV and he was driving these crazy guys with his game . It shows how much tennis is a mental game and you have to be playing smart.”

Richard Gasquet, who with 574 career victories has more match wins than any other Frenchman, knows Simon better than most, having spent close to two decades on Tour with him. “He’s an incredible player. Everybody struggled against him,” Gasquet said. “He was playing very clever on the court. Never missed. Big talent. His ball-striking, forehand, backhand was amazing. Every player in the world can tell you he struggled against Gilles Simon. Tactically, it was very difficult to play against him.”

France has generously shared its tennis talent over the years. Henri Leconte was a 1988 finalist at Roland Garros, while Guy Forget went to five major quarter-finals and rose to the position of Roland Garros tournament director. Cedric Pioline reached two Grand Slam finals and, like the two aforementioned players, cracked the Top 5.

So, too, did Jo-Wilfried Tsonga, a major finalist (2008 Australian Open), winner of 18 titles and more than $22 million in prize money before he retired earlier this week. Yannick Noah, the beloved winner of Roland Garros in 1983, won 23 titles and climbed to No. 3 in the Pepperstone ATP Rankings.

And now, in the bottom-line business of match wins, Simon has surpassed all of them. The resilient Frenchman’s victory over Johnson made him only the 56th player in the Open Era to accomplish this heady milestone. For the record, he is 500-390, good for a winning percentage of .562. Simon has collected an impressive 14 titles and won more than $15 million. 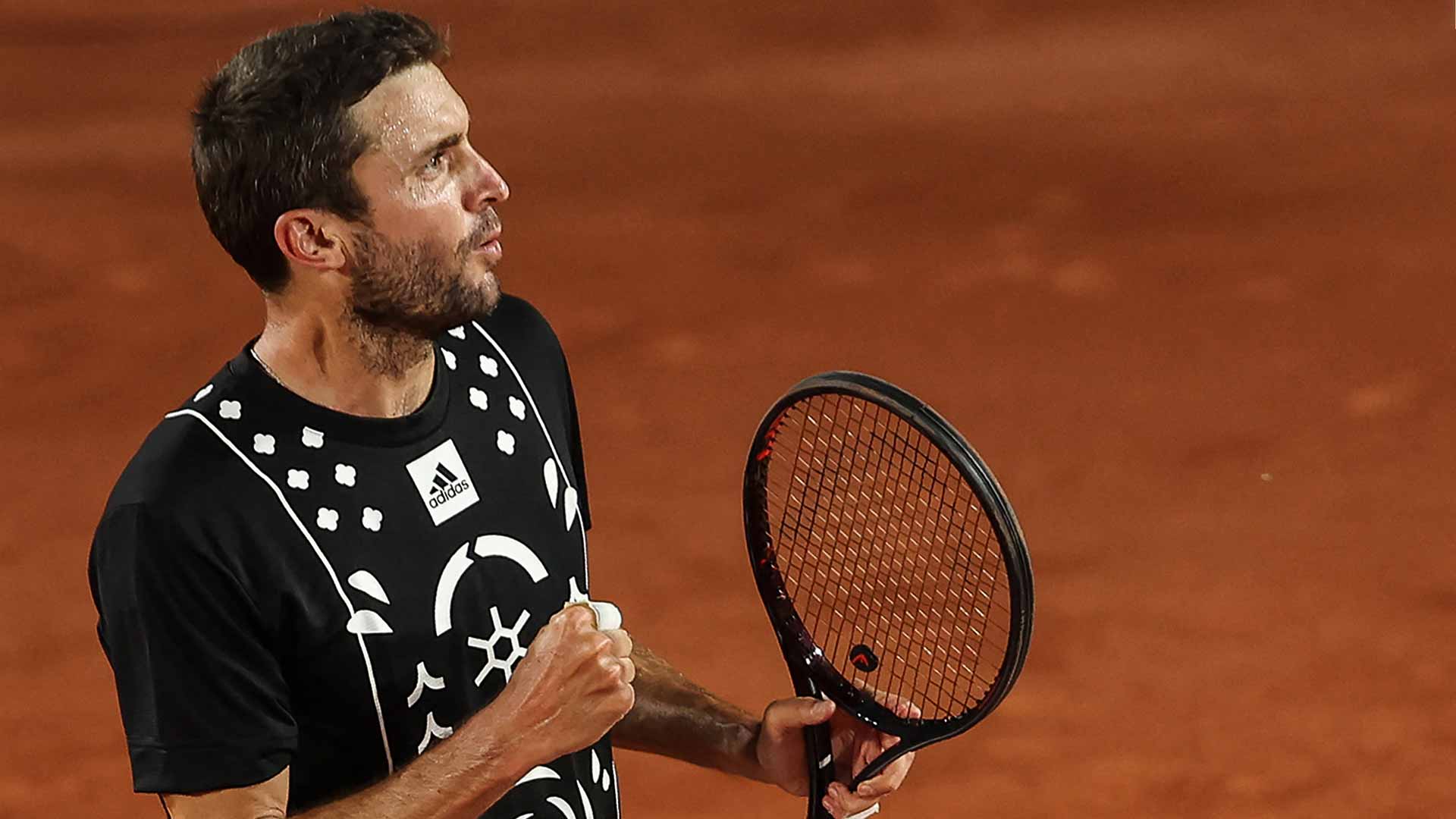 Gilles Simon” />
Photo Credit: AFP/Getty Images
Incredibly, Simon and Hugo Gaston are the last two Frenchmen standing at Roland Garros. Simon, who last made the third round in 2018, meets Marin Cilic on Saturday for the opportunity to advance to the fourth round.

“Ultimately, I have been wanting to be a tennis player since I was a kid, since I was 10 years old,” Simon said. “This is the only thing I did. You’re not perfect. You can’t be perfect every time. It’s not a matter of wins and defeats, of ranking. It’s beyond that. If I were to give a judgment on my career, things could have been better. There are matches I could have won, but there are a lot of matches I could have lost, as well.”

He was born of Paris in 1984 and, encouraged outside by his parents, began playing tennis at the age of six. In his early teenage years a professional career seemed unlikely; Simon didn’t see a growth spurt until much later than his peers. Still, he admired the 5-foot-9 Michael Chang, who won Roland Garros in 1989.

Simon turned professional in 2002 – two decades ago. His first ATP-level victory came in February 2005 in Marseille, over Thomas Johansson. Two months later, Simon reached the quarter-finals at Casablanca before he made the main draw of his first major, Roland Garros.

His first title came two years later, at the Open 13 in Marseille, and it confirmed Simon’s ability to compete with the game’s best players. He defeated Lleyton Hewitt, Jonas Bjorkman and Robin Soderling and, in the final, handled Marcos Baghdatis. A second title (Bucharest) vaulted him into the Top 30.

A year later, after a second-round win over Roger Federer in Toronto’s Rogers Cup, it was the Top 15 for Simon. That fall, with a semi-final victory over Rafael Nadal in Madrid, Simon found himself in the Top 10 for the first time – and the No. 1 Frenchman, ahead of Gasquet. Simon qualified for the 2008 Nitto ATP Finals, surprising Federer in the round-robin phase, before falling to Novak Djokovic in a three-set semi-final loss.

In 2011, Simon won the biggest of his career titles, in Hamburg. He scored his 400th win, over No. 3-ranked Stan Wawrinka, at the 2016 Rolex Shanghai Masters. On two occasions – the 2009 Australian Open and 2015 Wimbledon – Simon reached the quarter-finals.

Simon didn’t have the dazzling weapons possessed by some of his peers, but he had an undeniable guile and a rare, intuitive feel for the game.

Frenchman Benjamin Bonzi described him “Like a professor on the tennis court. Everything about his strategy, his physical movement and everything. He put something different into tennis. He was not very powerful, he didn’t have a big serve. When he was at his best, his movement was so good and he put the ball in difficult positions.”

Countryman Benoit Paire also called out Simon’s tactical brilliance. “He’s one of the smartest players on the court,” Paire said. “He’s very talented because everybody says, ‘Okay, just play from the baseline.’ But what he is doing all his career and making the Top 10, like this is something crazy.”

“I did my utmost as best as I could,” Simon said. “Could I have done better? Yes. Could it have been less good? Of course, yes, as well. I tried to do my best all the time. Did I manage to be proud? Yes, sometimes. That’s part and parcel of a tennis career.