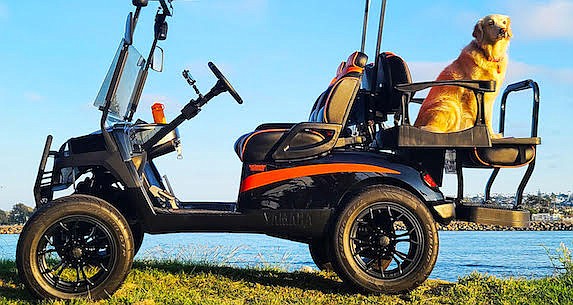 On May 24, a person snuck into Hotel Del Coronado and stole their “Safety & Security” golf cart. The navy blue electric cart had custom wheels and a unique red-colored old-school pinstripe design on its hood. Nearly two days later, the hotel’s security director found their stolen golf cart listed for sale on Craigslist; he contacted the Coronado Police Department. The police officers drove across the bridge and found the golf cart parked in a National City driveway. “The officers then watched a man get into the golf cart and drive it around the area of ​​the home,” reads the June 2 police report. “Our detectives, with the assistance of @nationalcitypd, took the suspect into custody and charged him with vehicle theft.”

A photographer from the island saw photos of the heisted golf cart online and exclaimed, “Great work, CPD! Apparently, there is money in golf carts now… I heard of another theft a few weeks back.”

About eight miles south down the Silver Strand and a month or so earlier, a maroon-colored EZ-GO golf cart with a beige top and a number ten and ‘IB’ stickers emblazoned on it was reportedly stolen from an RV park on Palm Avenue in Imperial Beach.

Because of recent golf cart thefts throughout the county and the notorious golf cart theft from The Tin Fish restaurant on the Imperial Beach Pier in 2018 — Tommy Tran is taking extra precautions to protect his custom golf cart. “My golf cart is parked inside a fenced area with dogs in the yard, so I don’t have problems with theft,” he said to me on June 13. “When I take it out, I have The Club theft device that locks the steering wheel to the pedal so no one can steal the cart. I am aware of the theft, so I keep an eye out [via a security camera] when I leave the house.” 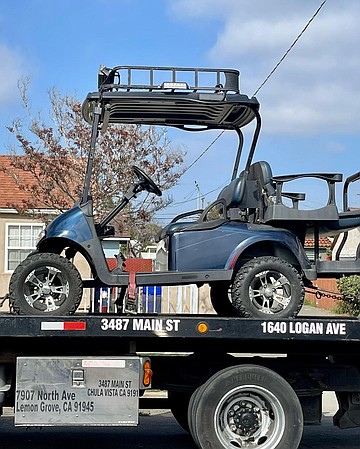 The 43-year-old government employee protects his customized golf cart because it saves his family money. Tran explained, “since the gas prices have gone to an all-time high, using our golf cart has saved us over $1500 a year on gas. It would’ve cost us one to two gallons to pick our kids up from school (in a gas-guzzling vehicle); five times a week would be 5-10 gallons a week.”

Tran estimates his electricity bill is an extra $500 a year to charge the lithium battery installed within their red-colored golf cart with custom wheels and an offroad light bar. In addition, he spends about $150 annually on insurance. But, “there is no maintenance for golf carts,” he said. “I only check the air in my tires; the brakes have never failed me, batteries last 4-6 years, and no oil changes.

“Golf cart prices have been on the rise with everything else, making it very profitable for thieves to steal them. Also, it’s easy to take a golf cart if you have a trailer.”

The police said the customized Hotel Del Coronado golf cart was stolen with a trailer.

Joseph Capp in Pacific Beach protects his custom golf carts and his customers’ golf carts with tire locks — devices to prevent would-be thieves from rolling the 800-pound (on average) cart onto trailers. In addition, “tracking devices can be planted in hard-to-find places on the carts,” he explained. “And motion detectors, similar to car alarms, are very inexpensive, and if someone moves or even sits in the cart, a siren will go off.”

The National Golf Foundation reportedly said there were 500,000 more golf players in the US in 2020 compared to the year before the pandemic — the most significant net increase in 17 years. And according to the Global Market Insights website, the North American golf cart market was valued at $1 billion in 2020, with over 120,000 units sold.

Then earlier this year, as gas prices throughout the county hit records high, the electric-powered golf carts grew more in popularity. Local NextDoor neighbors are currently sharing golf cart ideas on the app and website. And locals who saw and posted about Capp’s custom carts roaming the Pacific Beach and Mission Beach neighborhoods and beaches further accelerated the already hot miniature EV market.