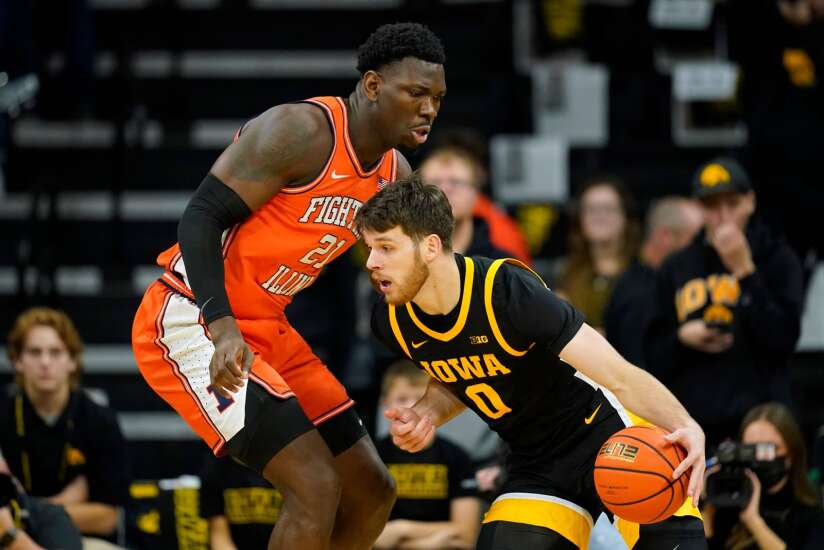 IOWA CITY — As of Tuesday afternoon, 1,714 Division I men’s basketball players had entered the NCAA transfer portal this offseason.

Only five high-major teams hadn’t taken in any of them. Iowa was one of them, though the Hawkeyes expressed interest in at least a few of the bigger players in the portal.

So barring an unexpected late arrival, Iowa’s bigs in 2022-23 will again be Filip Rebraca, Josh Ogundele and Riley Mulvey. Rebraca is a power forward playing in the post. The other two are inexperienced and unproven.

“How I felt about (McCaffery seeking a center) was me, Josh and Filip didn’t prove ourselves enough to be a strong 5-man,” Mulvey said. “Now that he didn’t get one, we’re going to have to prove ourselves to be able to take over that spot.”

McCaffery hasn’t been a big portal guy. He seeks both basketball fits and personality fits, and isn’t keen on adding players just for the sake of adding players. But he did add transfer Rebraca last spring, then gave him a tough duty.

The 6-foot-9, 230-pound Rebraca started all 36 games, averaging 21 minutes and 5.8 points after scoring almost three times that much the previous season for North Dakota. He was a power forward playing against some big centers, like Kofi Cockburn of Illinois, Hunter Dickinson of Michigan, and Purdue’s Zach Edey and Trevion Williams.

“It wasn’t easy,” Rebraca said. “Clearly, I got banged up a little, but it was worth it. At the end, we won the Big Ten tournament. So I can’t complain.

I played the 5 at North Dakota, but didn’t have guys to go up against as big as Kofi Cockburn and Zach Edey. It’s quite the experience, but I feel I battled through it.”

Rebraca will be 25 in September. Mulvey will be 20 in October. Iowa needs Rebraca to be a more-confident and well-rounded offensive player, and needs Mulvey to be more than a sideline spectator.

Mulvey is 6-11, 245 pounds. He was a freshman fresh out of a Connecticut prep school last year. He didn’t redshirt, playing a total of just 83 minutes. He said that was good, not bad.

“I feel like the moments I was in (games), I needed,” Mulvey said. “Because if I didn’t have them, I wouldn’t have had a moment of realization that I didn’t play because I didn’t work hard enough.

“I would have had that moment this year instead, as a redshirt freshman instead of a sophomore.

“The only reason I didn’t make it into the lineup was because I wasn’t as committed as I thought I was. Now that I’m actually thinking about it and putting myself out there now, I’m going to try to do my best.”