The junior high squad made a short 20-minute drive to Bentonville to participate in the Tiger Junior High Girls basketball camp at Bentonville High School.

On day one, played June 12, the first opponent for the Lady Bulldogs junior high team was one from just up the Arkansas 59 corridor, the Gravette Lady Lions. Decatur took control of the game halfway through the first quarter and never gave it up. In the end, the Lady Bulldog junior girls prevailed, taking its first camp win, 19-11, over the Lady Lions. In that contest, Daisy Fuentes led the scoring with five points, followed by Shaylee Morales and California Harrington, each with four.

Game two pitted Decatur against Woodland Junior High from Fayetteville. Once again, Fuentes led the way to a 15-8 victory with seven points, followed by Sydnie Brooks with four.

Greenwood was up next for Decatur. The Lady Bulldogs easily defeated Greenwood, 25-4. Sunshine Thor was the leading scorer in this contest with seven, followed by Brooks and Fuentes with six each.

During the afternoon sessions, Decatur squared off against Lincoln. Here the Lady Bulldogs faced their first loss of the series, 15-9. Thor once again led the scoring drive with five points.

The Decatur Lady Bulldog junior high team finished day one with a total of four wins and one loss.

Day two of the camp saw the Lady Bulldogs avenging their earlier loss to Lincoln on day one with a 15-9 win over the Lady Wolves. Brooks led the scoring drive with five points, followed by Thor and Fuentes, each with four.

Gravette was up next. As with the contest the day before, the Lady Bulldogs took control and eventually defeated the Lady Lions, 28-8. In this contest, Fuentes had her first double-double with 10 points. Thor scored eight points. Ruby Frye and Boyd had four each.

The only other loss of the two-day camp came at the hands of Bentonville’s Fulbright Junior High School Lady Timber Wolves. The Lady Timber Wolves pulled out in front and never gave the Lady Bulldogs a chance to catch up as they took the win, 15-5.

According to assistant coach Katy Sojka, just before the Kirksey game, the Lady Bulldogs received a treat that the youngster will not soon forget.

“While waiting for their last game on Tuesday, Coach Fess Thompson introduced them to current Razorback forward and former Bentonville Tiger, Maryam Dauda,” Sojka said, “Dauda, ​​a 6-4 former McDonald’s All-American, swung by the camp to check up on the upcoming talent in Northwest Arkansas.”

In all, the Decatur Lady Bulldogs’ junior high team walked away from the Bentonville camp with nine wins and only two losses. Factoring in the six wins at Jay, Okla., the girls are on a big winning streak with 15 wins and two losses.

As she did during the Jay camp, Daisy Fuentes led the pack with a total of 57 points. Sunshine Thor was close behind with a total of 36 points, and Sydnie Brookes had 27. Shylee Morales contributed 16 points, while teammates California Harrington and Brooklyn Boyd had eight each. Rubi Frye and Leslie Hernandez rounded out the scoring effort with four each.

Fess Thompson summed up the two-day event shortly after the camp concluded, saying, “Every one of my girls scored points during the camp, every one of them. I couldn’t be more proud of them all.” 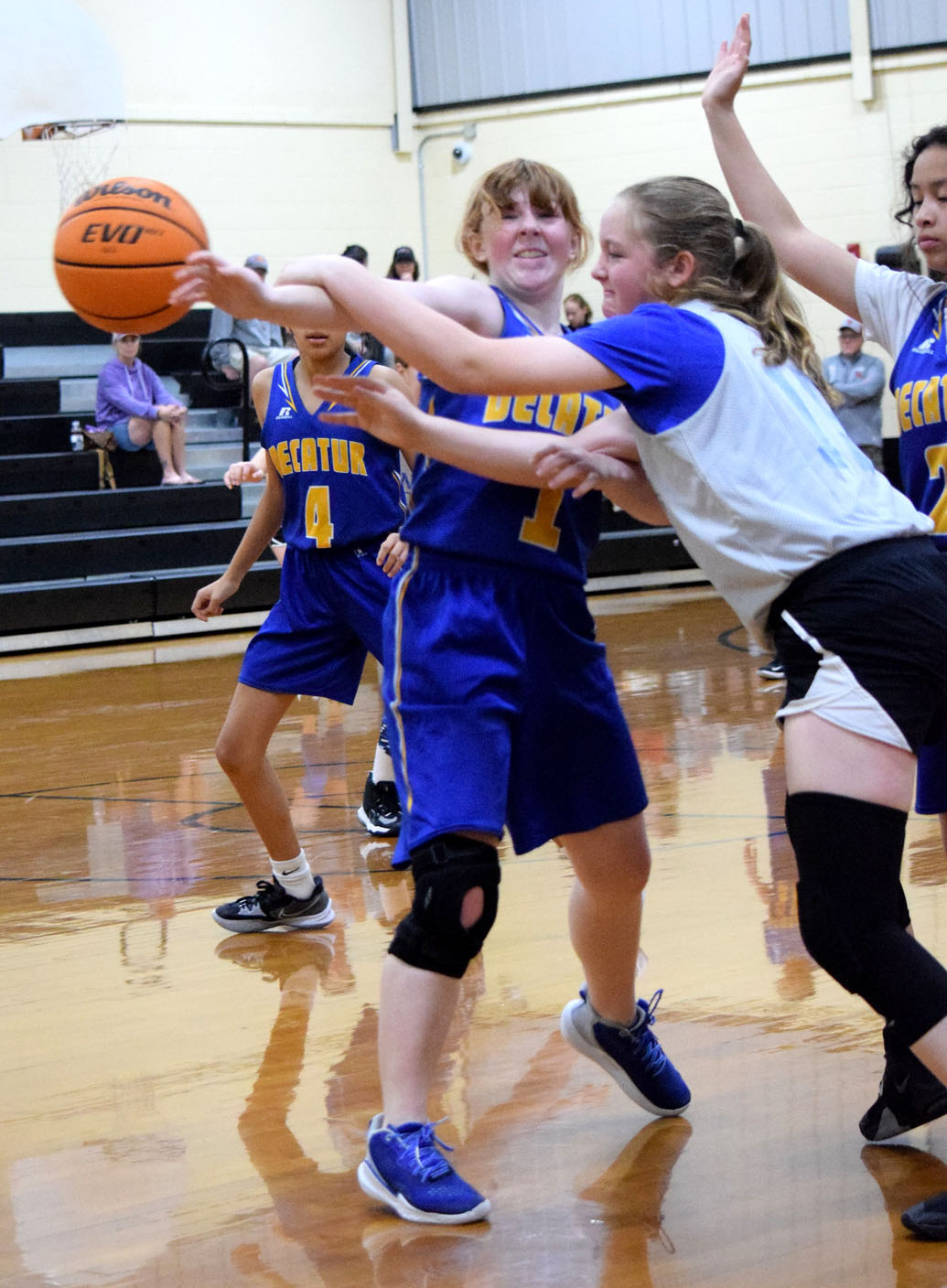 Westside Eagle Observer/MIKE ECKELS Lady Bulldog Sydnie Brooks forces a turnover during the first half of the Decatur-Jay, Okla., junior high girls basketball contest in Jay on May 26. Brooks accounted for a total of 27 points for Decatur during the two days of the Bentonville junior high basketball camp on June 13-14. 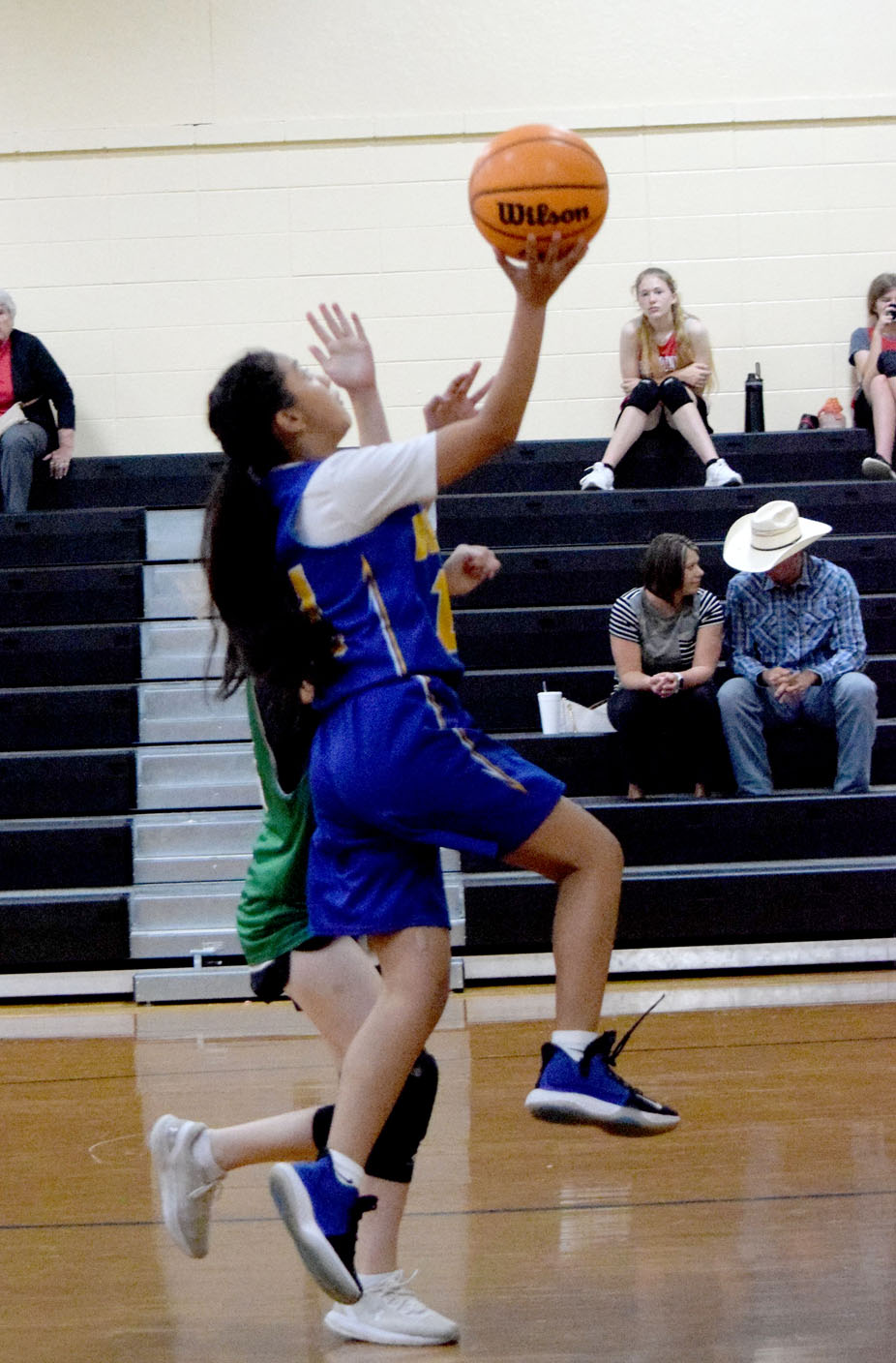 Westside Eagle Observer/MIKE ECKELS Shylee Morales goes up for a shot during the Decatur-Quinton, Okla., junior high basketball contest in Jay, Okla., on May 27. During the June 13-14 Bentonville junior high girls basketball camp, Morales accounted for a total of 16 points, leading her team to nine wins and two losses.