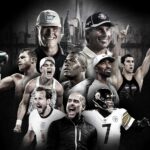 It’s Team USA and Freddie Couples against Team Rest of the World and Ernie Els.

Looking for something new in the world of golf? Who isn’t these days?

Fred Couples, Ernie Els and a host of world-class athletes from sports other than golf are looking to deliver just that next week with the debut event of the Icons Series, June 30-July 1, at Liberty National GC, just across the Hudson River from downtown Manhattan.

The Icons Series is a Presidents Cup-style event, pitting a mix of 12 active and former brand-name athletes from the US against their international counterparts in a six-session clash. Couples and Els will captain each squad.

Who’s in the field?

Shrewd observers will note just 11 players named on the US team and 10 on the International side. The remaining players will be added to each team in the coming days.

“These guys are all really good golfers,” Els told Colt Knost and Drew Stoltz this week, in an interview that will appear on next week’s episode of Subpar. “Some of these guys are scratch golfers. We’ll see how serious they take it. Being so competitive in their sports field, I think the competitiveness is going to come through as the tournament goes on. I don’t think anyone wants to lose in this thing.”

Where will it take place?

Liberty National. The 2017 Presidents Cup host site, which has also been the venue for FedEx Cup playoff events, is back hosting a team competition. Will this one be as big of a blowout as the US-dominated ’17 Cup was? Unlikely! But we’ll have to see how Freddie’s team handles the pressure. The event will take place June 30 and July 1, with a practice day on June 29.

The six-session series will take place over two days, with three 10-hole match play sessions per day and the event culminating in head-to-head singles clash. You read that correctly: 10-hole match-play sessions. That means the squads won’t be competing on the Liberty National layout as we know it. Check out the adjusted course map below:

Day 1 will begin and end with five matches of fourballs, where the best score from each tandem of players is their team score. Sandwiched in between the fourball sessions will be a greensomes session, which is similar to foursomes. The difference with greensomes is that each player hits a tee shot, and the two-player teams select their favorite tee ball and play alternate-shot from there in. Day 2 will follow the same format with the exception of the third session, which will feature 12 determining singles matches.

How can I watch it?

Viewers at home can tune in to the action on the second day of the matches — that’s Friday, July 1 — when the broadcast will stream on NBC’s Peacock app from 2-6:30 pm ET.

You may indeed. New York City-area fans who would like to see the action in person can do so with grounds tickets that are $25 per day or $40 for a two-day pass. Spectators 17 and under will be allowed in for free with a paying ticket-holder.

Why should I watch?

Umm, did you see the lineups? There are athletes representing nearly every major sport: NFL, MLB, NBA, tennis, boxing, Premier League soccer, even cricket! Also, the match-play format changes things a bit. We’re used to sporting figures and celebs competing in pro-ams under stroke play. Now, we’ll see them competing as teammates in a match-play format, in front of fans and cameras on a playing field that is much different from the ones they’ve dominated for years. The nerves alone should be enough of reason to tune in.

Is this the start of something bigger?

That’s the plan. The Icons Series is aiming to host future events in Australia, Asia, Europe and the Middle East. No dates have been announced for those sites, but they’re coming.