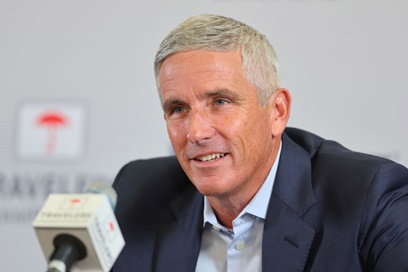 PGA Tour Commissioner Jay Monahan: “If this is an arms race and if the only weapons here are dollar bills, the PGA Tour can’t compete”Getty Images

PGA Tour Commissioner Jay Monahan yesterday called the Greg Norman-led LIV Golf Invitational Series an “irrational threat,” and said that it is “not concerned with a true growth of the game” and that it is “attempting to buy the sport and dismantle the institutions intrinsically invested in its growth,” according to Josh Berhow of GOLF.com. Monahan said, “As I also said to the players yesterday, let me be clear, I am not naive. If this is an arms race and if the only weapons here are dollar bills, the PGA Tour can’t compete.” Monahan: “The PGA Tour, an American institution, can’t compete with a foreign monarchy that is spending billions of dollars in attempting to buy the game of golf. We welcome good, healthy competition. The LIV Saudi golf league is not that. It’s an irrational threat; one not concerned with the return on investment or true growth of the game” (GOLF.com, 6/22GOLF CHANNEL’s Rex Hoggard wrote Monahan “spent much of the press conference” at the Travelers Championship “fielding questions about the ongoing threat from LIV Golf and how the circuit plans to respond” (GOLFCHANNEL.com, 6/22). Hoggard said Monahan had a “tone the way he said things” because he “wanted to make sure his points were very, very clear.” Hoggard: “The tone was exactly, I think, what the players were wanting and he kept it very , very simple when he made the message” (“Golf Central,” Golf Channel, 6/22).

FIGHTING BACK: GOLF.com’s Dylan Dethier wrote the PGA Tour is “punching back.” That was the message Monahan “delivered to his membership in a closed-door meeting” on Tuesday, and it is the message he “delivered to the public in a press conference” yesterday. Monahan insisted the Tour’s plan for increased purse sizes and a big change to the FedExCup was “already in the works” but acknowledged that the moves were “obviously accelerated by the current environment” (GOLF.com, 6/22). In NY, Bill Pennington writes Monahan “did not sound conciliatory” yesterday. Using “forceful language” in his first news conference since mid-March, Monahan “continued to assert the PGA Tour’s primacy” (NY TIMES, 6/23). WFAN’s Boomer Esiason said Monahan is “trying to take every defensive” effort that is “possible under his guidance to make sure that the PGA Tour is going to be protected in the future, and I think he’s done a lot of that in the right way (“Boomer and Gio,” WFAN, 6/23). ESPN.com’s Mark Schlabach wrote if there was “any doubt about the venom brewing” between the PGA Tour and LIV Golf, the “latest salvo was delivered by the breakaway circuit” yesterday. Just as Monahan was “unveiling increased purses, a revamped schedule and dramatic changes” to the FedExCup Playoffs, LIV Golf sent a news release confirming that golfer Brooks Koepka had “defected to the new circuit” (ESPN.com, 6/22).

MONEY OVER EVERYTHING: GOLFWEEK’s David Dusek wrote LIV Golf “contracts players to compete in its events,” then “pays them more based on their performance and the performance of the team they play for that week.” Over the last few weeks, there have been murmurs that golfers who make it to the PGA Tour “should be paid a set amount at the beginning of the season” to pay for things like travel and coaching. Asked about that topic, Monahan “did not say it was off the table,” but “did not say it was coming soon.” Monahan: “The foundation of this tour, the meritocracy of playing on the PGA Tour, how hard it is to get out here, how hard it is to get at the highest level of the game, that is ultimately going to be the attribute” (GOLFWEEK.com, 6/22). GOLFWEEK’s Adam Schupak wrote Monahan’s response to the arms race was to “throw money at the problem.” But Phil Mickelson, outside his “fixation with media rights,” may have “stayed put if this was announced a year ago.” It is “much of what he was trying to use his leverage from the potential of a rival circuit to obtain.” The Tour has “never faced a competitor that could outspend them,” but its “business isn’t exactly hurting” (GOLFWEEK.com, 6/22).

BALANCING DIFFERENT PRIORITIES: The WALL STREET JOURNAL’s Andrew Beaton writes some of the overhauls also “reflect the delicate game the PGA Tour faces in order to satisfy members,” not all of whom have the “same priorities.” Top players have “sought to not only get paid more,” but to “have more time for themselves.” Many have called for a “de facto offseason in the fall.” But they have “typically been discouraged from taking time off during the fall because then they fall behind in the lucrative FedExCup standings” (WALL STREET JOURNAL, 6/23). GOLF DIGEST’s Matthew Rudy wrote it was “only a few decades ago” that the PGA Tour “featured 60 exemptions and an ocean of have-nots.” The dollars are “different now,” but the vision described by Monahan at the Travelers Championship “had some of that early 1980s patina.” At least in the near term, the Tour will “do whatever it can to entice its marquee talent and prevent it from defecting to LIV Golf and its payday guarantees,” even if that “hurts the rank-and-file.” Top players on the PGA Tour “stand to get much wealthier.” Rudy: “If it sounds like life just got tougher for mid-tier players, non-winners and young players trying to break in from the minor leagues, you heard the same thing many players did” (GOLDFIGEST.com, 6/22).

NEEDING THE DRAMATICS: In Hartford, Dom Amore writes the “beauty of the PGA Tour is what Monahan needs to be on display this week,” especially Sunday afternoon when the front-runners “approach the packed grandstand surrounding the 18th green.” The US Open had a “dramatic finish” in Brookline, Mass., last week, and the Tour “could use one this week.” That is something the Travelers Championship “has a way of delivering” (HARTFORD COURANT, 6/23).

A NECESSARY RESPONSE: Golf Channel’s Hoggard said the PGA Tour “needed to do something… and this was certainly a good first step.” Golf Channel’s Brandel Chamblee said it was a “good faith response by the PGA Tour.” Chamblee: “There were grumblings over the last couple of weeks that the Tour needed to do something, make some forthright statement.” But the Tour would have had to spoken with their “sponsors and partners, tournaments, get some legal counsel to make sure that they were on firm footing and this statement by Jay Monahan was certainly that” (“Golf Central,” Golf Channel, 6/22).