PAUL BUTLER, HOST: Today is Thursday, June 23rd. Thank you for turning into WORLD Radio to help start your day.

MYRNA BROWN, HOST: And I’m Myrna Brown. Coming next on The World and Everything in It: tennis. Wimbledon starts on Monday—it’s the oldest tennis tournament in the world.

AUDIO: [BIRDS CHIRPING IN THE TREES AT THE INTERNATIONAL TENNIS HALL OF FAME] 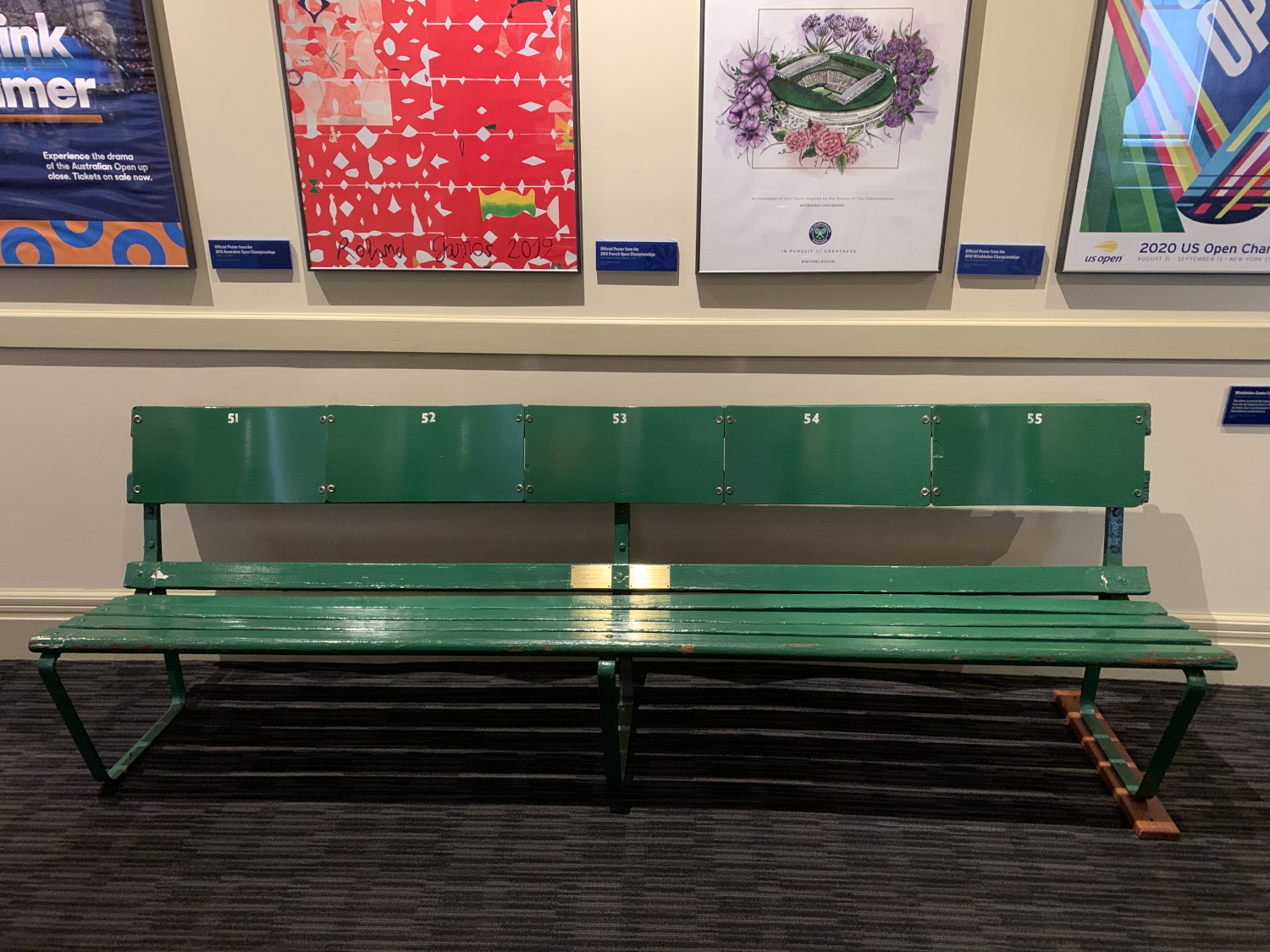 JENNY ROUGH, REPORTER: The International Tennis Hall of Fame in Newport, Rhode Island, draws crowds not only for its museum, tournaments, and tributes to tennis greats. But because of a rare feature: 13 grass tennis courts.

A group of ladies, warming up before a game, say the grass courts have a unique appeal, different from clay or hard-court surfaces.

JESSICA: It’s amazing. We look forward to it out of all the surfaces. … Grass is simply magnificent.

CAROL: It’s a game where you have to hit the ball out of the air, because if you let it bounce—

JESSICA: It dies. It dies.

LINDA: The ball is low to the ground, so you have to sort of get up to the net as fast as you can and just try to take it out of the air. 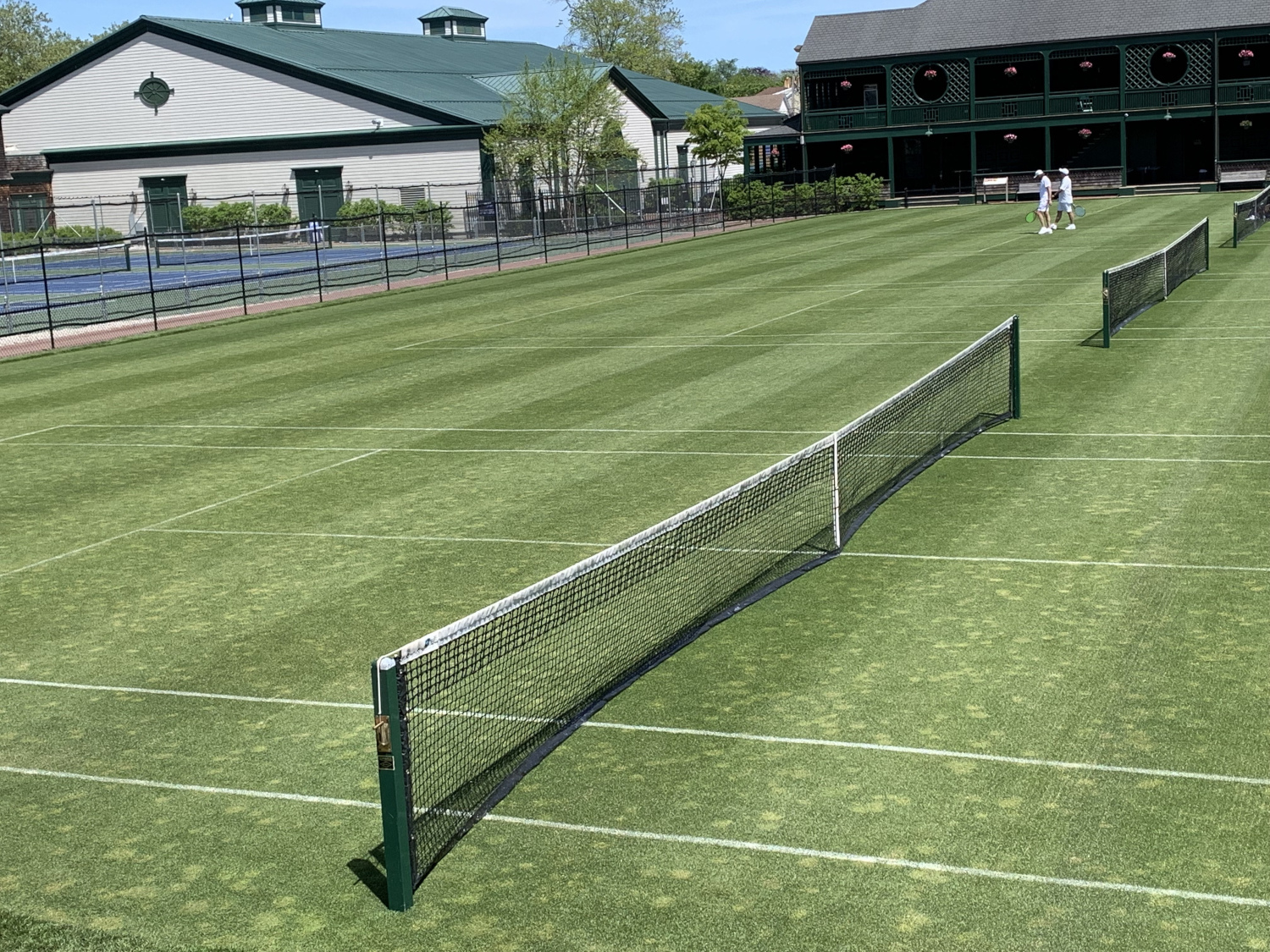 Some of the grass courts at the International Tennis Hall of Fame in Newport, Rhode Island
Photo by Jenny Rough

Bill Mountford is the director of tennis here and says people come from all over to experience it.

BILL MOUNTFORD: We are open to the public. So anybody can come in off the street and if they want to try to play. You can come and experience the wonders of getting to play on grass and being here.

Historians debate the origins of the sport. But it’s believed lawn tennis dates to 12th century Europe where players batted a ball back and forth with their hands. That evolved to a paddle, and finally to a strong racquet. Today’s tennis racquets are light and easy to maneuver—meaning anyone can learn the game. Mountford works with players as young as 4 to as old as 90. Lawn tennis started as a social game, almost like a friendly conversation among friends. Even though it’s evolved into a competition, Mountford says it’s an ideal family sport. He often plays with his wife and two teenage kids. 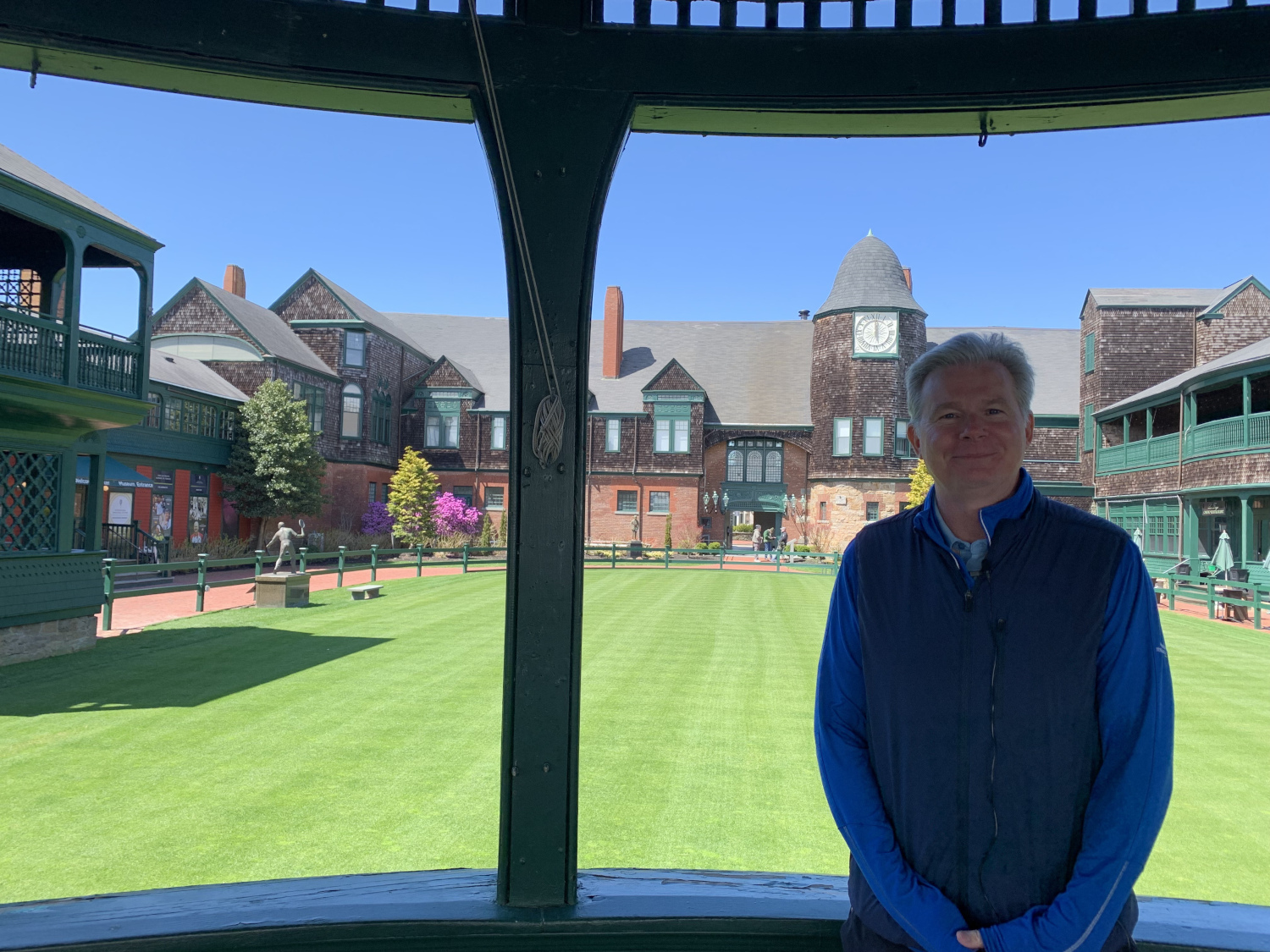 Bill Mountford, Director of Tennis at the International Tennis Hall of Fame in Newport, Rhode Island. Standing in front of horseshoe court.
Photo by Jenny Rough

MOUNTFORD: The four of us are a lot of times on the court together. So it really is a neat thing. And the other thing is, players at different levels, you can rally back and forth, even if you’re not competing and playing for money or blood. So it’s one of those really neat quirks of our sport that men can play with women, women can play with men, children can play with seniors, and everything in between.

The object of the game is simple.

MOUNTFORD: You have to hit the ball over the net inside the lines one more time than your opponent.

At the Rhode Island center, groundsman Jon Bengston keeps the courts in immaculate condition. He starts his day around 6:30 in the morning and spends the first three hours getting them prepped and ready for players, who begin arriving at 10 am

JOHN BANKSTON: Something gets done to the physically tough every day.

He paints the courts twice a week. Mows and rolls the courts four times a week. The go-to grass these days is a mix of rye grass and Kentucky bluegrass.

Similar to a tee box on a golf course. He collects clippings. Deals with fungus. Weeds, like clover and dandelion. And critters.

BANKSTON: Our biggest thing is rabbits. So we have a lot of rabbits here. They eat the grass. They leave their droppings after eating the grass.

BILL: Traditionally at Wimbledon, the courts used to be lightning fast, huge advantage to those who can, who could serve well, who could move forward in volley. It would favor the attacking players.

The ball bounce would barely rise above a player’s socks. It would skid and stay low. Listen to the difference. Here’s a ball bouncing on hard court.

If you watch old footage:

MOUNTFORD: The bounces were just shocking. You’d hit a serve and the ball would just kind of dribble away from the best players in the world. So if you didn’t get to that ball quickly … then you were really in trouble.

On the opposite of that spectrum? Clay.

BILL: The slow clay, especially red clay courts, would favor the players who could stay out there, play further from behind the baseline, just out-rally players, because the clay would hold the ball up. It would sit. So it was very hard to get the player so far out of position that you could hit a winner.

And in the middle of those two? Hard Courts.

BILL: But the hard courts, the footing is a lot more certain than it is on either grass or clay. So it’s much easier to plant and change direction. On clay, you have to slide and then regain your balance. And on grass it is definitely a little bit less certain of your footing.

Today, grass courts are firmer. That allows the rallies to last longer. What does it feel like to play on a grass court? I had to find out. So I took a lesson with Coach Phil. 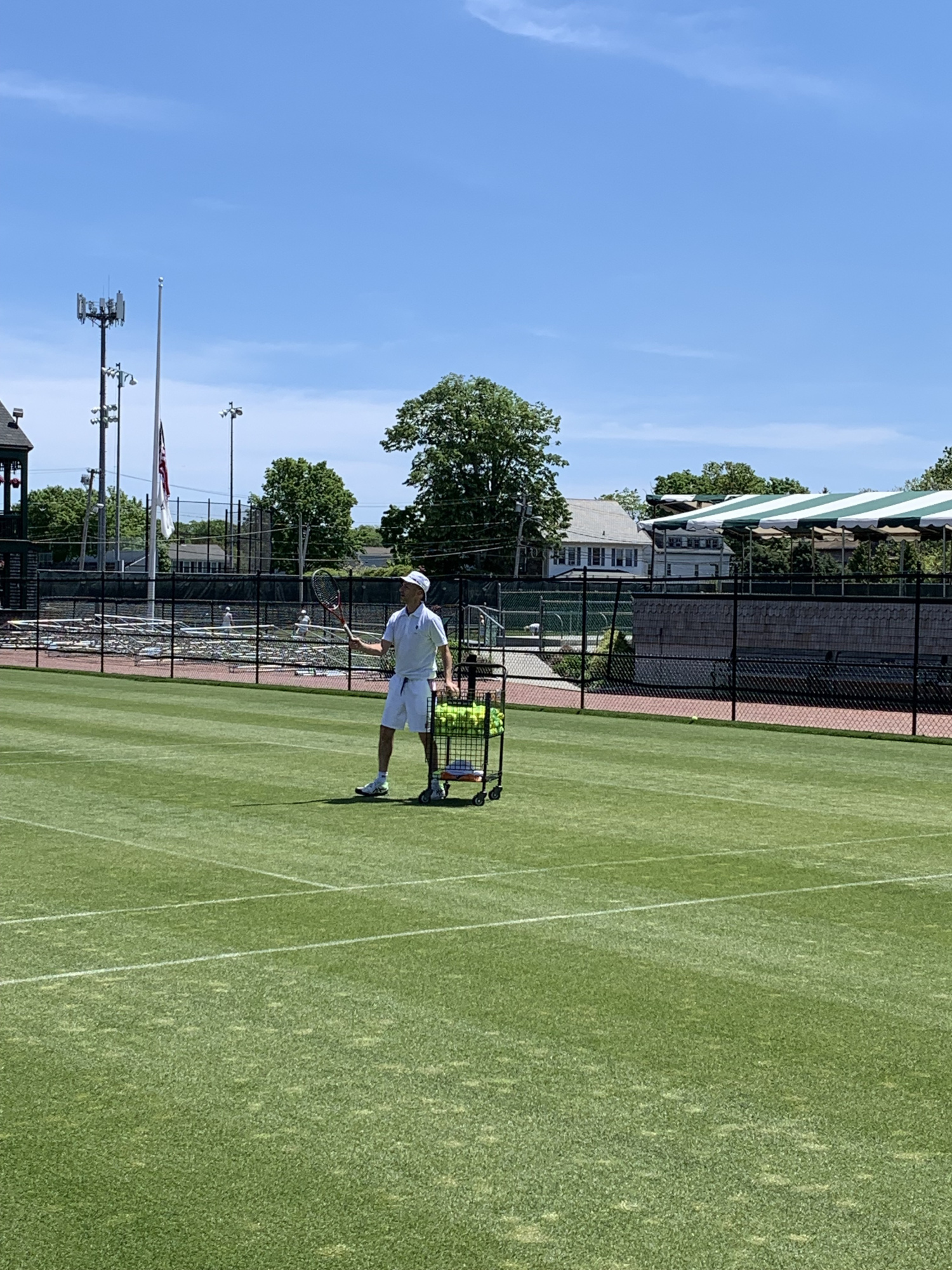 JENNY ROUGH: So what are we going to do in the lesson today?

COACH PHIL: Well, first we’re going to get acclimated to the bounce. We’re going to let you kind of get used to that. Going to the bounce instead of waiting for the ball. And then we’ll do a bit of everything…

COACH PHIL: You’re working twice as hard on grass. It’s like your feet almost get sucked into the court, you know?

COACH PHIL: You have to bend down every time really low. A lot of leg work. If you don’t move, you’re not going to get to the ball.

With grass courts, it can be hard to see the baseline. I hit into a sea of ​​green and try my best to gauge if the ball’s in or out. Coach Phil says grass courts do tend to result in bad line calls and a lot of disputes on the court.

COACH PHIL: Think about one of your strategies is to hit the soft ball. And short.

COACH PHIL: So if you ever have the opportunity to get out there, you should put in on your bucket list. Get on a grass court.

WORLD Radio transcripts are created on a rush deadline. This text may not be in its final form and may be updated or revised in the future. Accuracy and availability may vary. The authoritative record of WORLD Radio programming is the audio record.