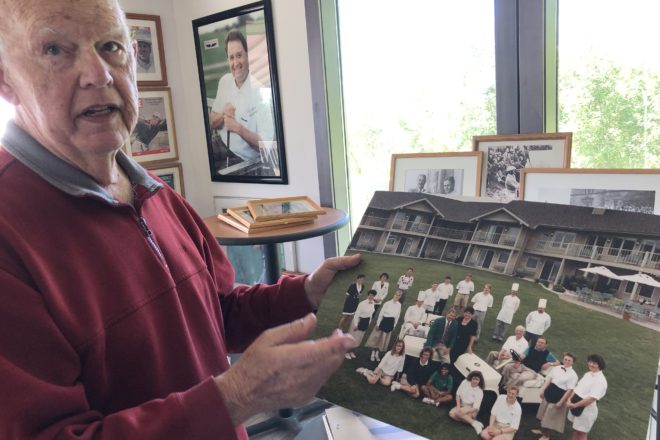 Surrounded by golf art and history pieces that are being given away to charitable causes, longtime Cherry Hills employee Jerry Kain holds a 1990s photo of the chefs, golf staff and owners of Cherry Hills. Photo by Craig Sterrett.

Peter Trenchard made great contributions to golf in Door County and nationwide through the years, and along the way, he amassed hundreds of art and history pieces related to golf.

Many of them had a home at Cherry Hills Golf & Lodge in Sturgeon Bay, but after completely renovating the lodge, clubhouse and dining areas during the past two years, owner Jon Martell ran out of space to store the collectible prints, paintings and mounted history pieces that hung on the walls. Now he wants people who love golf – or who just want some art for their walls – to pick up a picture or two, all for the price of a donation to a cause he supports.

“I don’t want to throw them away, so I thought to give them away would be a good means of clearing them out. I am accepting donations for the benefit of the Veteran Golfers Association,” Martell said.

He started with 350 pieces before two art-giveaway weekends inside the old clubhouse/halfway house behind the 18th green, and about half of those remain, said longtime Cherry Hills employee and former Sturgeon Bay Schools superintendent Jerry Kain. Now, Martell or an employee will unlock the building for anyone who wants to peruse the collection and take something home.

“This was all the Trenchards’,” Kain said as he stood surrounded by framed art ranging from limited-edition prints of 1980s and ’90s golf stars such as Greg Norman and Seve Ballesteros, to posters of 19th-century British golfers and women golfing in the 1930s, and much more. “I think it’s his love of golf is what it was. He must have been a collector. You don’t accumulate this overnight.”

Other pieces include golf-related advertising, Sports Illustrated covers and comedic golf art from New Yorker magazines. In addition to amassing art, Peter and Dianne Trenchard were great contributors to an early-1990s revival at Cherry Hills.

Trenchard brought with him to Door County a great knowledge of the game courtesy of leadership roles in the Western Golf Association and the US Golf Association rules committee, and he worked as an official at professional tournaments. The Trenchards hired chefs and highly qualified staff, and they built a reputation at the Cherry Hills restaurant, especially for brunches and gourmet dinners.

Peter also saw a need to stop using a tiny green about 50 yards from the clubhouse. He routed the ninth hole and built – to championship-golf specifications – a large, two-tiered green right in front of the golf shop and restaurant balcony.

And golf art greeted guests throughout the resort. The signed poster from one of Trenchard’s friends, Raymond Floyd, hung behind the golf counter for many years. Some of the art is kitschy – the 1970s fantasy posters of imaginary golf holes in impossible locations such as the rim of the Grand Canyon, for instance – but most of it is not. And some of the pieces are worth spending time to gaze at and read.

Then there’s a five-photo conglomeration of Bobby Jones smoking a cigarette and watching mid-1900s golf stars trying, and failing, to make the same downhill, 12-foot putt that Jones sank on #18 at Winged Foot to win the 1928 US Open .

There also are some nongolf pieces, such as promotional posters for Door County Tourism, Peninsula Players and, of course, Cherry Hills.

Kain said that just as Trenchard helped to turn Cherry Hills around in the 1990s, Martell has conditioned the property into an excellent, enjoyable resort course.

“Jon has done a good job remodeling the entire resort and getting the course into very good playing condition,” Kain said.

More than 70 golfers participated at Maxwelton Braes June 5 in the Forestville-Maplewood Lions’ outing for Southern Door charities, Lions’ causes and DOOR CANcer. In addition to boosting that club’s charitable powers, the Sister Bay Lions served up hundreds of bratwurst president at the event and raised some money for their Northern Door causes as well, said Sister Bay Lions LeRoy “Butch” Schramm.

But it wasn’t the Sister Bay Lions’ biggest golf fundraiser by any means. That’s coming up July 17 at Peninsula State Park Golf Course, when the Lions are filling a time slot vacated by the previously popular Scandia Village outing.

Pick up an entry form at local courses, taverns, restaurants, post offices, libraries and other establishments, or call Scott Shanahan at 414.406-6613.