Wednesday 3rd August was the third and final day of the judo competition at the Birmingham 2022 Commonwealth Games. After two days of medal success for the four Home Nations, the heavyweights were looking to add to the medal tally.

won his opening fight in the -90kg quarter-final against Marius Metois (VAN) and went on to fight Thomas-Laszlo Breytenbach (RSA) in the semi-final where he won with two waza-aris for ippon and moved on to fight for barren.

Rhys Thompson (ENG) competing in the -100kg category won his first-round contest against Isaac Bezzina (MLT) and moved on to fight Kayhan Ozcicek-Takagi (AUS). Thompson went down a waza-ari in the quarter-final but clinched on to win after his opponent was handed three shidos.

Thompson missed out on the chance to fight for gold losing his semi-final contest against Kyle Reyes (CAN) but still had the chance to take home a bronze medal.

Harry Lovell-Hewitt (ENG) was up against Victor Ahiavor (GHA) in his first-round contest which he had no trouble winning. In the quarter-final contest, Lovell-Hewitt faced Deepak Deswal (IND) where he controlled and won the fight after the Indian judoka was handed three shidos. In the semi-final, Lovell-Hewitt faced Shady Elnahas (CAN) where he lost out on the chance to fight for gold, but was still in contention for a bronze medal.

Andrew McWatt (SCO) lost his first contest by hold down against Liam Park (AUS) and dropped to the repechage where he fought Giannis Antoniou (CYP) and caught him with a spectacular foot sweep for waza-ari and followed that with a hold down for ippon .

In the women’s -78kg category, it was a Home Nations battle between England’s Emma Reid spirit Rachel Tytler from Scotland. Reid won the quarter-final contest with a throw with waza-ari and a hold down for ippon to progress to the semi-final. Reid won her semi-final contest against Moira De Villiers (NZL) and booked her place in the -78kg final.

After losing her quarter-final contest, Rachel Tytler (SCO) went on to win her repechage round against Hayley Mackey (NZL) to fight for bronze.

Natalie Powell (WAL) won her opening round contest in the -78kg category against Franceska Agathe (MRI) with ippon. Powell then won her semi-final contest with two waza-aris against Coralie Godbout (CAN) to fight in the -78kg final.

Sarah Adlington (SCO) dominated her quarter-final contest with a throw for ippon against Dianah Kana (KEN) and moved on to fight Abigail Paduch (AUS) in the semi-final which she won and went on to fight for gold.

Sarah Hawkes (NIR) lost her quarter-final contest against Abigail Paduch (AUS) but went on to win her repechage contest against Dianah Kana (KEN) and booked her place in the +78kg bronze medal contest.

Heading into the final block, judo for Great Britain had nine medals up for grabs across the four Home Nations.

In the women’s -78kg category, it was another Home Nations battle for gold as England’s Emma Reid was up against Natalie Powell from Wales. In a close contest, Reid clinched the Gold medal with a waza-ari score with Powell picking up Silver.

Rachel Tytler (SCO) was in contention for a bronze medal and faced Coralie Godbout (CAN). The quick-lived contest went in Tytler’s favor when she threw the Canadian for ippon.

In the women’s +78kg category, Sarah Adlington (SCO) was up against Tulika Maan (IND) in the battle for gold, which she secured with a waza-ari score.

In the men’s -90kg category, Jamal Petgrave (ENG) was hunting down his first Commonwealth medal and was up against Remi Feuillet (MRI). Petgrave controlled the fight taking it to golden score where he secured gold with a waza-ari score. 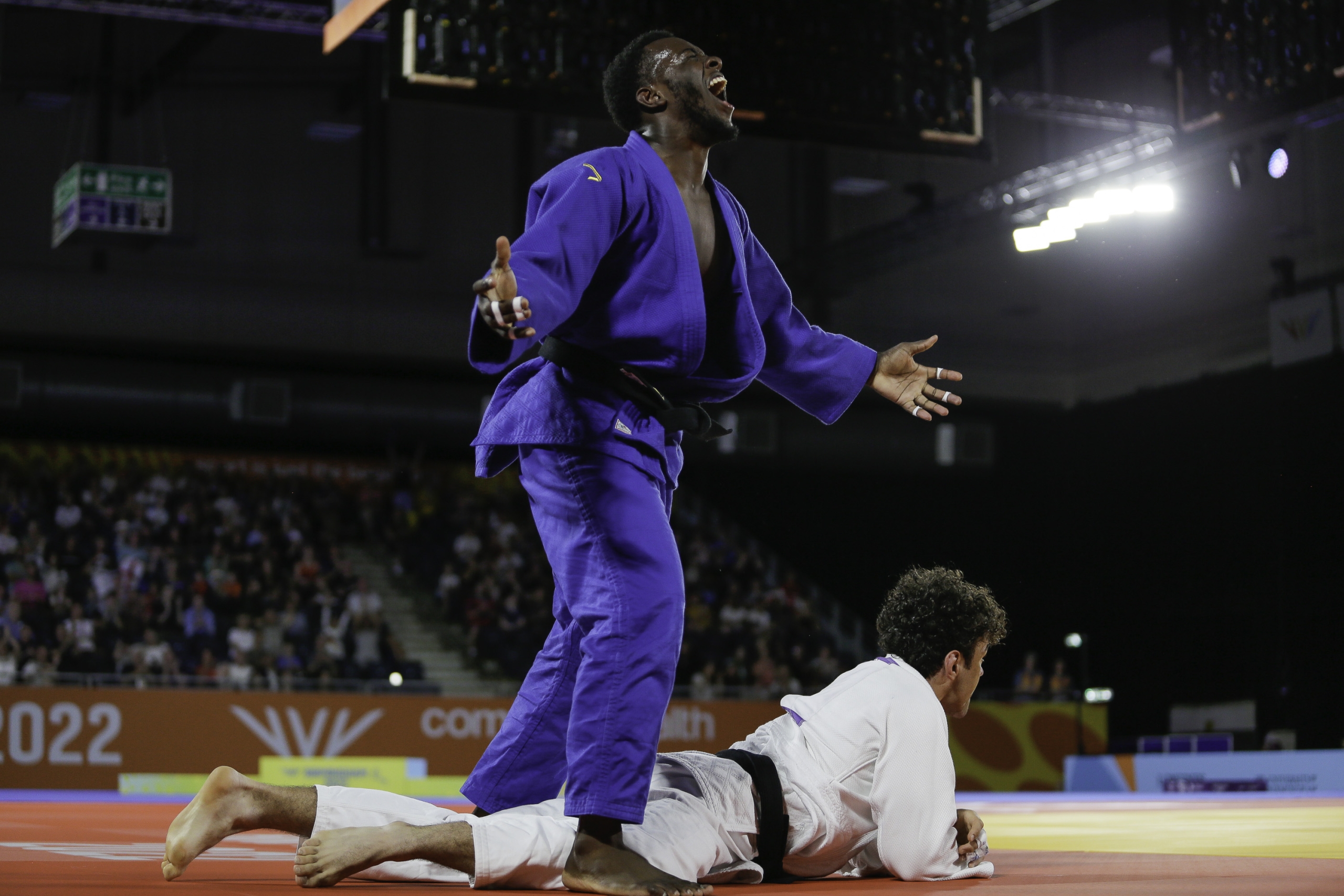 In the bronze medal contests, Sarah Hawkes (NIR) was first up in the women’s +78kg category to face Sydnee Andrews (NZL). Hawkes put up a good fight, but narrowly missed out on the bronze when Andrews scored a two waza-aris for ippon.

For the men’s -100kg, England had two judoka fighting for bronze. Rhys Thompson was up against Tevita Takayawa (FIJ) whilst Harry Lovell-Hewitt faced Kayhan Ozcicek-Takagi (AUS). 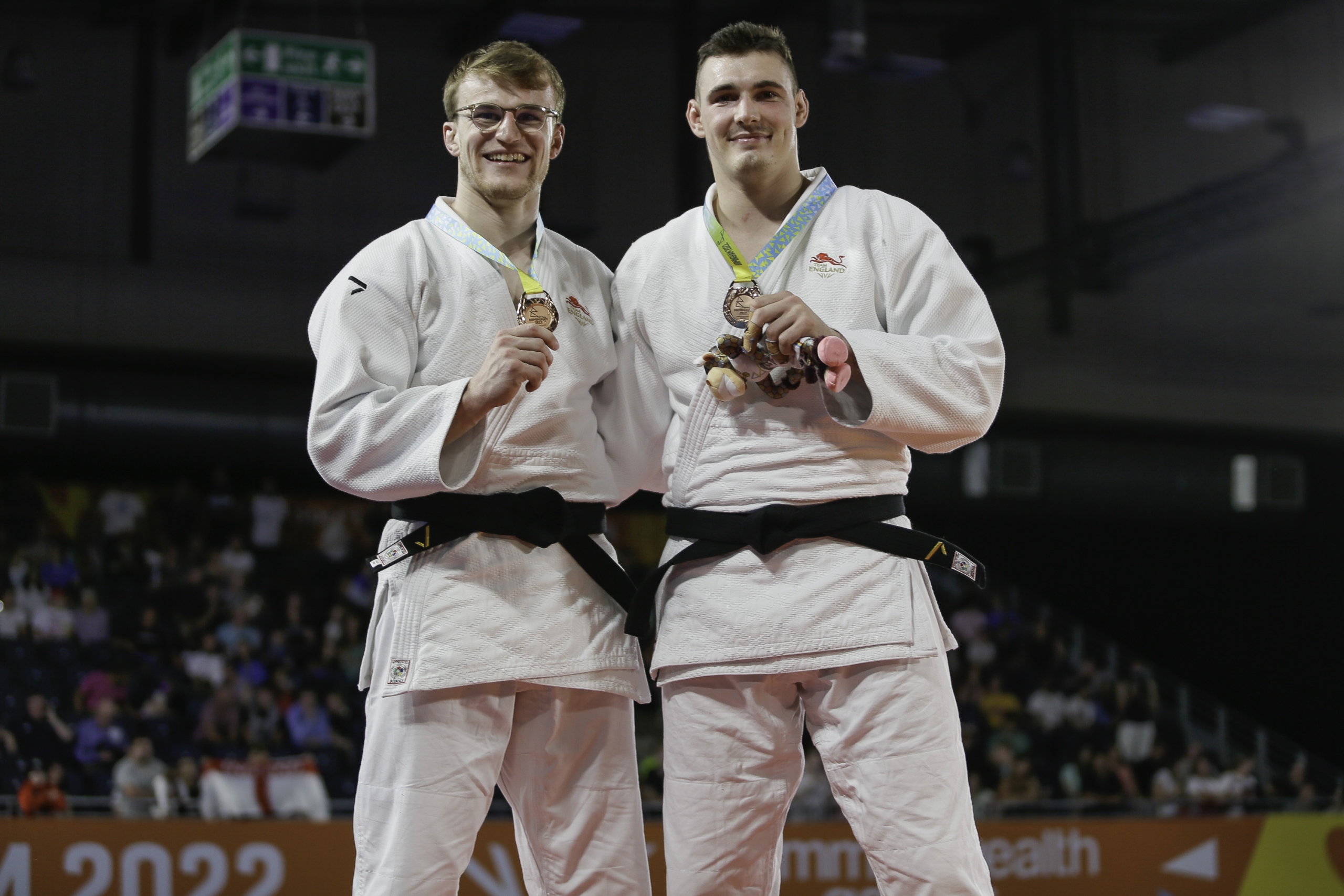 Thompson was strong in his contest and secured the bronze medal with an o-goshi for ippon against Ozcicek-Takagi.

In the last category of the competition, Andrew McWatt (SCO) was up against Sebastien Perrinne (MRI) in the men’s +100kg contest. It was a hard-fought contest, but McWatt narrowly missed out on the bronze after a waza-ari score.

The third and final day for British judoka was a solid performance securing seven medals across all four Nations.