Cho Se-hyuk poses for a photo after winning Wimbledon’s inaugural 14&Under Championship trophy, beating American Carel Aubriel Ngounoue in the boy’s finals on Sunday at the All England Lawn Tennis and Croquet Club in London. [KOREA TENNIS ASSOCIATION/YONHAP] 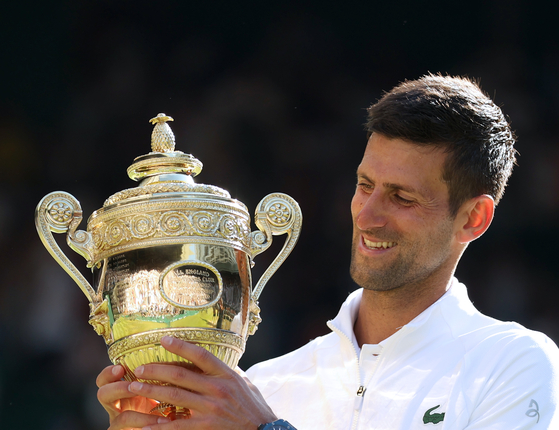 Novak Djokovic celebrates with the trophy after winning the men’s singles final against Nick Kyrgios of Australia on Center Court at the All England Lawn Tennis and Croquet Club in London on Sunday. [XINHUA/YONHAP]

Fourteen-year-old Cho Se-hyuk is Korea’s first ever Wimbledon champion, beating American Carel Aubriel Ngounoue in the final of the boys competition in the inaugural 14&Under tournament on Sunday at the All England Lawn Tennis and Croquet Club in London.

Cho beat Ngounoue in two straight sets after just one hour and 32 minutes, 7-6, 6-3, in the final to become Wimbledon’s first-ever 14&Under boy’s champion.

A total of 32 teenage players, 16 boys and 16 girls from 20 different countries, participated in the 14&Under Championships. After three days of practice at Roehampton, the junior players competed in a round-robin event with the winners from each of the four groups facing off in the semifinals.

“I had only imagined being at Wimbledon, and I was so happy to be invited,” Cho said in a statement released by the Korea Tennis Association on Monday.

“And winning the title has doubled my joy.”

For the girl’s 14&Under tournament, the trophy went to No. 1 seed Alexia Ioana Tatu of Romania, who beat countrywoman Andreea Diana Soare 7-6, 6-4 in two straight sets. 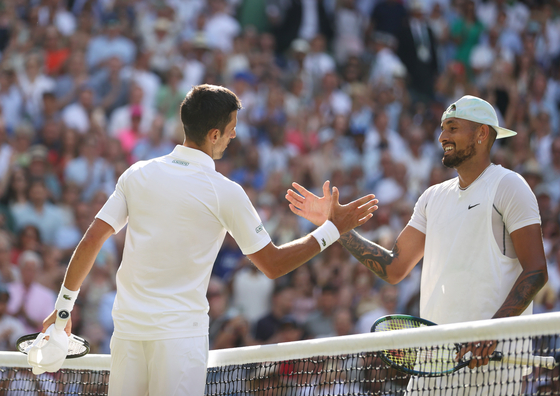 Novak Djokovic, left, greets Nick Kyrgios at the net after winning the men’s singles final match between Djokovic and Kyrgios at Center Court at the All England Lawn Tennis and Croquet Club in London on Sunday. [XINHUA/YONHAP]

In the men’s singles in the senior competition, Serbia’s Novak Djokovic claimed his fourth consecutive Wimbledon title and his seventh Wimbledon trophy on Sunday on Center Court, defeating Nick Kyrgios of Australia.

Despite conceding the first set 6-4, Djokovic won the next three sets 6-3, 6-4, 7-6, using his Grand Slam experience to his advantage and finding a way around the Australian’s strong serve and trick shots. Kyrgios had 30 aces while Djokovic only had 15. 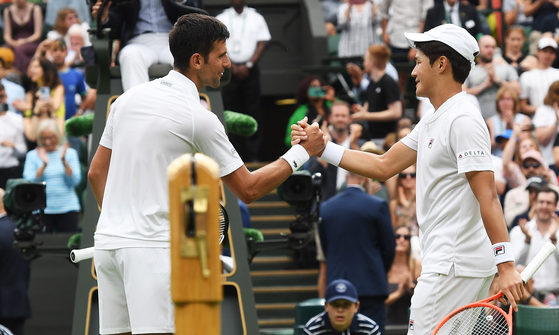 Serbia’s Novak Djokovic greets Kwon Soon-woo, right, at the net after winning their men’s first round singles match on day one of Wimbledon at the Center Court of the All England Lawn Tennis and Croquet Club in London on June 27. [EPA/YONHAP]

For his first round at Wimbledon, Djokovic had faced Korea’s Kwon Soon-woo, who managed to put on a formidable performance against the top seed. Rather than rolling over for a three-set drubbing — as might have been expected from world No. 81 Kwon facing the No. 3 — the top Korean rose to the occasion, forcing the Serbian to four long sets, none of them easily won.

Despite putting up a good fight, the match ended three sets to one, Kwon only able to win the second set. Although the end result saw Kwon out of the tournament, his performance as he faced the 20-time Grand Slam winner for the first time was still markedly impressive, pushing the match to two hours and 27 minutes and earning a warm standing ovation from a packed Center Court crowd and Djokovic himself.

“Credit to Kwon for playing some really high quality tennis, he deserves an applause definitely,” said Djokovic on June 27 after winning the first round of Wimbledon.

“Always starting the tournament, I didn’t have any lead up preparation tournaments or matches prior to Wimbledon, so you were always going to feel less comfortable than you would like to at the beginning, particularly if you are playing against someone as talented as Kwon who stays close to the line and who hits very clean from the forehand and backhand side.

“It was really difficult to go through him so I had to figure out a way tactically to get in control of the point, it wasn’t easy to put a lot of variety into the game. I think serves helped, I faced a break point in the third set that really, if he broke my serve, it could have really gone a different way, this match.”

Nadal, who was also in action at Wimbledon this year, dropped out of the after defeating Taylor Fritz of the United States in a grueling quarterfinal that lasted four hours and 32 minutes due to a muscle tear to his stomach. Kyrgios was scheduled to face Nadal in the semifinals but instead advanced to the final with a walkover.

Wimbledon ran from June 27 to Sunday. The next Grand Slam event will be the US Open from Aug. 29 to Sep. 11.