A traumatic childhood accident helped spur on the World Cup-winning All Black, as his autobiography reveals. RW reviews his book, newly published in paperback this week

The moment that saw Sonny Bill Williams towards stardom

When Sonny Bill Williams was four, he suffered an accident that was to have a searing psychological effect. Panicking after a chip pan caught fire, a teenage cook at a charity residence fled from the kitchen and threw the pan outside – where young Sonny Bill was playing in the backyard. Boiling fat went over the back of his legs.

Neighbors heard his screams and rushed to hose him down. Even so, Williams spent more than half a year in the intensive burns unit of Auckland City Hospital before returning home in a wheelchair. His parents weren’t allowed to touch him as his skin grafts were so fragile.

“It’s a kind of pain only someone who’s been severely burned can understand,” says Williams. And it was followed by pain of a different kind in later years because when kids at school saw his scars they called him Kentucky Fried Chicken Legs or SBL (Sonny Burnt Legs).

The center on the attack against Ireland in 2012, one of his 58 Tests for New Zealand (Getty Images)

“It was bad enough being half-Samoan and having a pale complexion without the stares as well,” the All Black great adds. “It shaped my childhood. Growing up, I had a lot of demons from that. But I was determined to make those skinny white legs muscular. Maybe it made me train harder? I do sometimes think about the effect of those burns on the person I became.”

Williams relates the incident in his autobiography, You Can’t Stop The Sun From Shining, published by Hodder & Stoughton last autumn and again in a paperback edition this week. The ghostwriter, Alan Duff, wrote the acclaimed novel Once Were Warriors.

We can only conjecture about how much the accident drove Williams to the heights he attained. What we do know is that his impact on rugby – union and league – was immense, with his 58 New Zealand caps and two World Cup titles not really reflecting his iconic status. “A once-in-a-hundred-years athlete,” says the book blurb generously. “Perhaps the most physically gifted individual I’d ever seen,” says Jonny Wilkinson, recalling his season playing with Williams at Toulon.

Growing up in state housing in Mount Albert, a working-class suburb of Auckland, Williams dreamed of playing in the NRL and buying his mum a house with wallpaper. His Samoan-Australian parentage brought him problems.

“I think us being ‘half-caste’,” says his older brother Johnny, “we weren’t fully accepted by the full Samoans or by the whites. So we had to go twice as hard to prove ourselves.” Johnny once got a six-month ban from all contact sports after breaking someone’s jaw in a match.

Success came young for Sonny Bill. At 14, he played for New Zealand U16s and was named Player of the Tournament. At the same age, he signed a contract for the Canterbury Bulldogs and at 15 he was playing for the U21s at Marist Rugby League Club. By 18, he had made his NRL debut for the Bulldogs. He wasn’t just surviving, he was smashing people and starting to unleash the offloads for which he would achieve world renown. 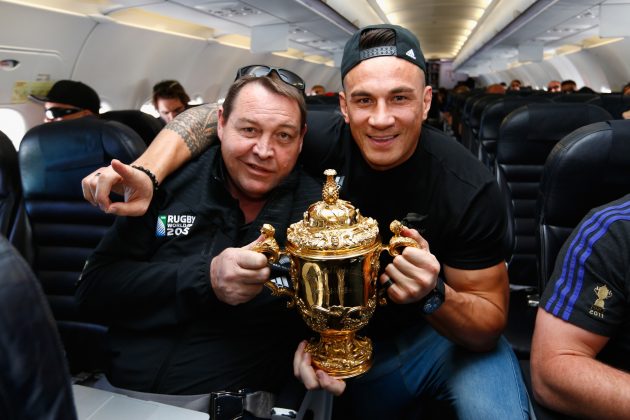 The ensuing adulation in his early years in the league became more than he could handle. Williams had seen the damage that alcohol could do – his father’s drinking and gambling contributed to his parents splitting up – but that didn’t stop him. He partied as hard as he played footy and he slept with a lot of women. “It took me a while to realize I wouldn’t find deeper meaning in a shot glass,” he says, “and I was a slave to my lusts and desires.”

His conversion to the Muslim faith, the result of new friendships, proved seminal because it brought extra attention, it prompted unwelcome comments. When Tana Umaga wanted to see if he fancied switching codes and joining Toulon, Williams jumped at the opportunity. 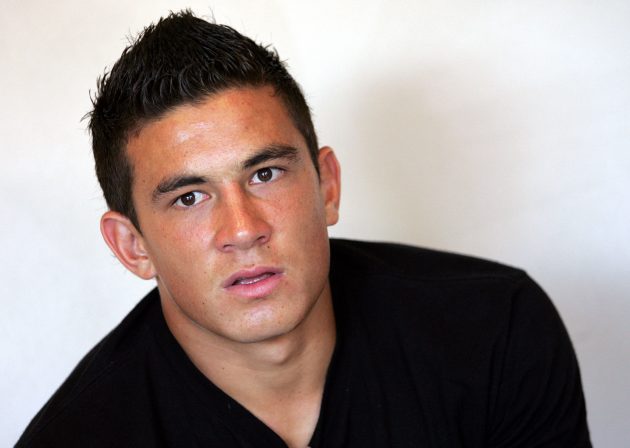 Fresh-faced in March 2005, when Sonny Bill was 19 and playing for the Canterbury Bulldogs (Fairfax/Getty)

So in 2008, Williams got himself a Samoan passport to ease visa problems – he flew to Apia for a cup of tea with Samoa’s prime minister! – and left for France in a hurry. During a stop at Singapore, he discovered the Bulldogs were trying to subpoena him for breach of contract.

In the end it cost about $1m to buy out his contract, although friends paid for him. By then, he had been holed up in the attic of a house in Wimbledon and fled from a Biarritz hotel in the boot of a car before reaching the sanctuary of Umaga’s house in Toulon. Life wasn’t dull!

According to two Zoo Weekly at the time, Sonny Bill was the most hated person in Australia, ahead of the Bali Bomber. But going to France was the circuit-breaker he needed. 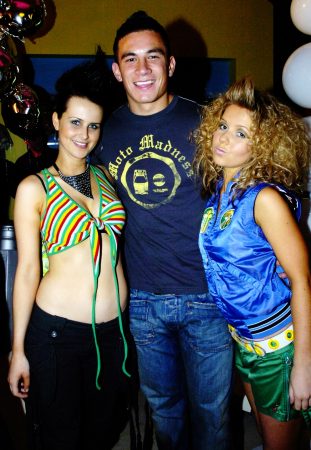 Sonny Bill at a party in 2005 (Fairfax Media/Getty)

“I had to make some huge changes to my life to get to the good place I found myself in after a couple of years in Toulon,” he says. “Back in 2007, I was in the opposite space, in what’s called the party life but should be called the toxic life. Cocaine, painkillers, prescriptions, women, alcohol. I was dabbling in it all.”

On one occasion, a doctor lambasted him for turning up for surgery with so many drugs in his system that he could easily have died on the operating table.

Sonny Bill survived, of course, he found religion and peace in his heart. He became a world-class center in union, a player that kids across the globe would imitate in the backyard. Philippe Saint-André wanted to pick him for France but instead he became an All Black, being called up after one club game for Belfast and five NPC games for Canterbury.

Jerome Kaino, who won two World Cups with him, says: “Sonny single-handedly changed how teams defended against the offload. But also how players wanted to play the game. It all came from him setting the example, with totally original thinking and execution.”

Such was the class of the Conrad Smith-Ma’a Nonu partnership that Williams never started a Rugby World Cup final, coming on as a sub in the wins of 2011 and 2015. Ahead of the 2011 semi-final against Australia, Steve Hansen told him: “Whatever you do, don’t offload.”

However, the coach soon came to trust him and at England 2015 Williams set up a try in the final for Nonu with only his second touch. It was a typically sublime moment of skill.

Williams is critical of Hansen’s man-management in 2019 and his career didn’t get the ending he wanted. He hoped to join Kieran Read, Owen Franks and Sam Whitelock as a three-time World Cup winner but New Zealand lost to England and that was that. He started the pool game against Canada and the bronze medal match against Wales, the latter his final Test. 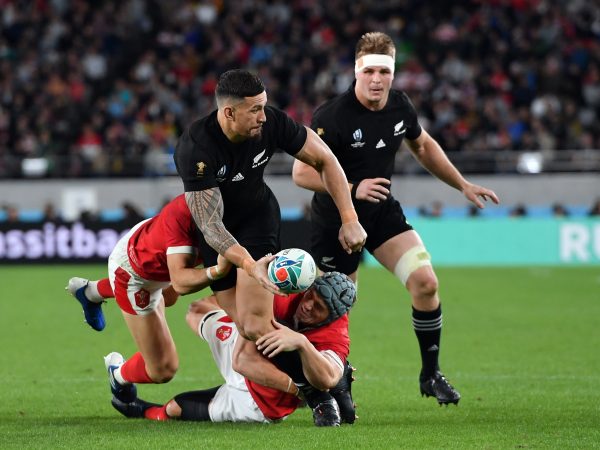 Creating a try for Ryan Crotty during his final Test, against Wales at RWC 2019 (MB Media/Getty)

The Crusaders, Chiefs, Panasonic Wild Knights, Counties Manukau and Blues were other teams he represented in rugby union, with league sides Sydney Roosters and Toronto Wolfpack briefly enjoying his services at the end of his career.

His dream of being an Olympic champion went disastrously wrong as he ruptured his Achilles on the first day at Rio 2016 and New Zealand stumbled to fifth place. He also picked up a stomach bug and was quarantined in a storage room. 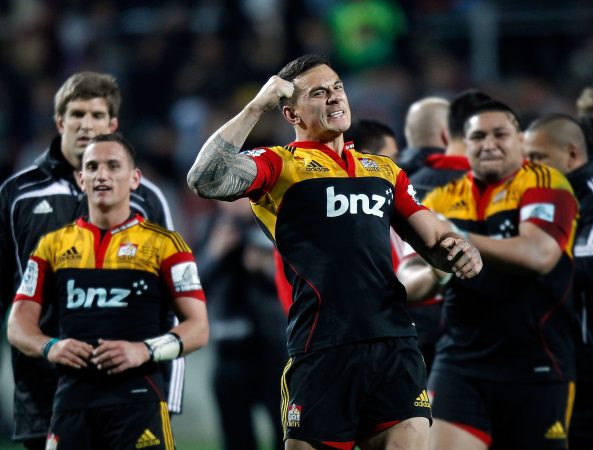 Celebrating a win by Chiefs in 2012, the year of their first Super Rugby title (AFP/Getty Images)

His extreme work ethic, allied to a willingness to endure pain, enabled him to play far longer than many others would have. He had “close to 15 operations on the same knee” – there was no cartilage left, it was bone on bone – and nursed it for almost the whole of his career. He took painkillers and anti-inflammatories almost daily.

Williams’s other sporting pursuit, professional boxing, is covered in-depth in the book, along with the strength he draws from his Islamic faith. He’s married to Alana, a Muslim of South African heritage, not that he knew that when he asked her out after spotting her in a Sydney clothing store in 2013. They married four weeks after meeting and today have four children.

He uses the platform of his book to call for change. He sees so much untapped potential in Pasifika and Māori youngsters and wishes he had a magic wand to wave self-belief into them.

“It would be good to see more brown coaches, board members and CEOs come through,” he says. “It’s important for our young people that Māori and Pasifika people are represented in all levels of society, because you can’t aspire to be what you can’t see. It is like me back at school, thinking I couldn’t do anything that required an education. My focus was sport because I had seen brown footy players on TV.”

The Sydney resident points out that Australian rugby has no Islander representation at board level, and zero per cent of the management jobs, despite supplying about half of the league and union players in the country.

After more than 300 pro games in both codes, a Super Rugby title with Chiefs and two victorious NRL Grand Finals to go with his All Blacks medals, Sonny Bill Williams now earns a living as a TV commentator for the Nine and Stan networks. “I feel blessed,” he says. 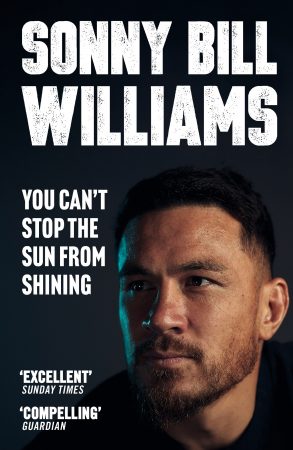 The title of his book, You Can’t Stop The Sun From Shining, stems from a remark a French journalist once made to him. You might find the book a little gushing at times, but it is a compelling and revealing memoir. It’s also available in eBook and audio formats.

Sonny Bill Williams: You Can’t Stop The Sun From Shiningpublished by Hodder & Stoughton, is now available in paperback, RRP £10.99.