It was the precursor to croquet

Easily one of the most iconic scenes from this season of Bridgerton is the pall mall scene in episode three. The game takes place with the Bridgerton siblings and their visiting guests the Sharmas. It’s funny, has moments of sexual tension and ends on a rather sad note. It’s essentially a turning point in the relationship between Kate and Anthony and is known to be a favorite scene for fans of the books by Julia Quinn.

The rules of pall mall are explained by the Bridgerton siblings early on in the episode and Daphne gives the Sharma sisters insights into how each of her siblings play. While Edwina struggles with the game, Kate is a natural competitor for Anthony. But just how real is the game of pall mall? This is everything we know:

What is Pall Mall?

Pall mall is a lawn game which originated in France in the 1500s. The name of it is inspired by the Italian word “pallamaglio” which translates to mallet ball.

The street “Pall Mall” outside the gates of St James Palace is named after the game as this is where it was originally played.

How do you play pall mall?

The game was played with a mallet to hit balls through a series of hoops. When it arrived in England it was being played in streets not gardens.

The aim of the game is to get the ball through the hoop with as few hits as possible.

Is pall mall the same as croquet? 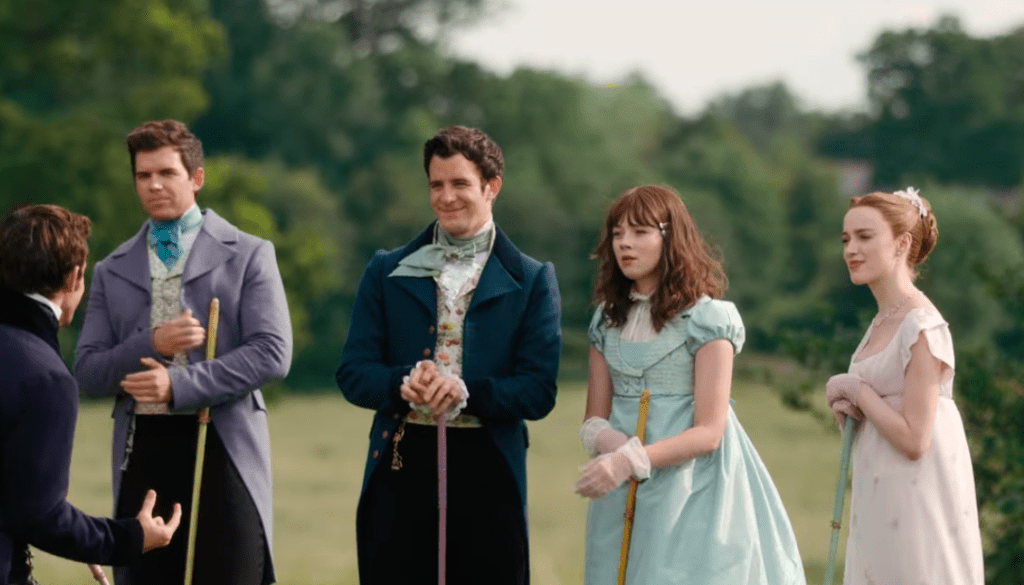 Pall mall could be considered the precursor of the lawn game croquet which is still played today.

Croquet is first believed to have been played in the 1850s and whilst some consider pall mall to be the inspiration for the game others argue it arrived from Ireland after being played on the beaches of Brittany in France.

The game is very similar to pall mall in which the aim is to get your ball through the posts in as few hits as possible.

How do the Bridgertons play pall mall?

In the Bridgerton books and Netflix series the pall mall game the siblings play is closer to croquet.

The historical consultant for Bridgerton said the show’s depiction is similar to how we play croquet today.

Speaking to Shondaland Hannah Greig said: “It’s pretty much how we play croquet today, with hoops and knocking balls off the green.

“Obviously, we have static images of how people played but no moving images, so we’ll never know for sure what the experience was like. I’m sure our version is a combination of historical basis and some fictional imagination on top.

These are the rules of pall mall the Bridgertons play by in the book ‘The Viscount Who Loved Me’:

1. Never use a regulation course

2. No honor and no honesty

3. Never play with an odd number

4. No collusion between competitors

6. No cheering for your opponent

9. The black mallet is the “mallet of death”

10. Instant victory if you send Anthony’s ball into the lake

Season two of Bridgerton is available on Netflix now. For all the latest Netflix news, drops, quizzes and memes like The Holy Church of Netflix on Facebook.

Related stories recommended by this writer:

•Um, so why was Francesca missing from most of Bridgerton season two?