Fans watching a Sydney rugby match were sent toppling to the ground at about 5pm on Saturday after the rail of a stadium terrace at Leichhardt Oval fell over.

The frightening scene unfolded in front of about 15,000 fans towards the end of a match between St Joseph’s and St Ignatius Riverview.

Rugby fans were quick to jump online to slam the ‘unsafe’ grounds.

‘Surely today seals it that Leichhardt Oval should be immediately condemned and Wests Tigers should never play there again,’ one person wrote.

‘Leichhardt Oval is a safety risk,’ another said. 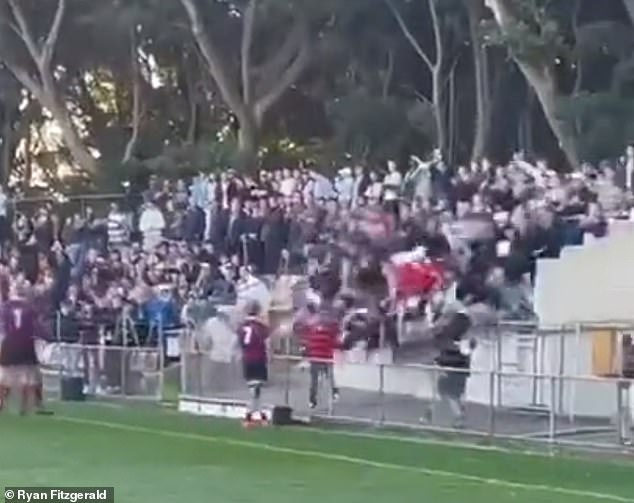 No one was seriously injured during a terrae collapse at Leichhardt Oval on Saturday night (pictured, fans falling after the terrace railing fell)

‘An upgrade of Leichhardt oval is still not going to fix muddy hill, portaloos and minimal food and drink outlets without major changes that would upset most. I’ve great memories of ground, but it’s had its day for big events,’ another wrote.

‘Seriously though this incident is caught in 4K. It’ll have to be a line in the sand with Leichhardt Oval in terms of improvements,’ another said.

‘Hopefully everyone is ok as this has the potential to be a nasty accident with a crush of bodies falling on concrete.’

A spokesperson for Ambulance NSW told Daily Mail Australia no one was seriously injured in the collapse.

Ambulance officers were already on stand-by at the scene for the match and were able to quickly attend to the fallen fans.

The news comes after just days after NSW Premier Dominic Perrottet failed to deliver on a promise to upgrade Leichhardt Oval.

Tigers chair Lee Hagipantelis responded to the premier’s funding snub by saying: ‘he has shafted rugby’.

‘These are elite sporting stadiums for the community,’ he told the Weekend Australian.

‘We have made our displeasure well known. He would be aware of it. As a club, we have set down and formulated a stadium strategy for the next five or 10 years predicated on Leichhardt Oval being upgraded.

‘The facilities at Leichhardt are third world, bordering on dangerous. He has attended Leichhardt on many occasions. He would be aware of it.’ 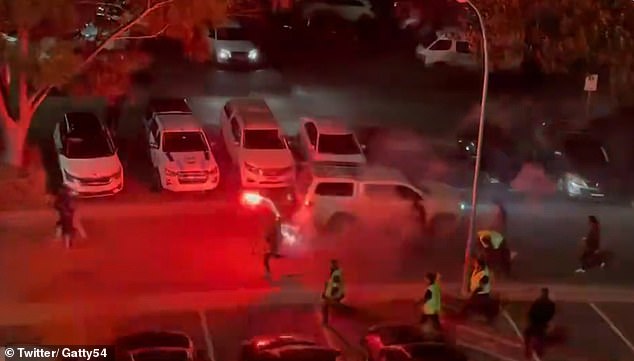 A brawl between angry hoodie-clad fans broke out outside Leichhardt Oval earlier this week (pictured, the fans throwing flares at each other)

Footage of the angry hoodie-clad fans was shared on social media with viewers calling their behavior ‘disgusting’.

‘Beyond disgusting… as a female who renews membership on her own am I safe going to these games on my own?’ one person wrote.

‘What if I was walking back to my car & got caught up in this? Especially with parking having to be so far away from grounds. Makes me seriously think.’

Another added: ‘Came down from the Central Coast with my two-year-old daughter and wife to see the game.

‘Walking out they threw a flare two meters away from us. Security were watching or running away. Zero protection for families.

‘Thanks to the lads that protected us and rushed us into the stadium.’