Chess.com’s newest event, BlitzChamps, the most ambitious crossover of 2022, commenced on Saturday, pitting six NFL all-stars against each other over the chess board in a bid for $100,000 for their favorite charity.

Split into two groups of three, the participants played a double round-robin where the top two finishers progressed to the championship bracket, while the lower-ranked players gain entry into the consolation bracket in which they will bid for redemption.

Wide receiver for the Cleveland Browns Amari Cooper was the standout in Pool A, winning both of his matches against the Cincinnati Bengals cornerback Chidobe Awuzie and New York Giants outside linebacker Kayvon Thibodeaux. Group B was edged out by NFL legend and headliner of the event, Larry Fitzgeraldalongside retired cornerback Will Daviswho finished ahead of the San Francisco 49ers defensive end Arik Armstead.

The championship and consolation finals of BlitzChamps will be decided on Sunday, July 10th, starting at 1 pm PT / 22:00 CEST.

The first BlitzChamps matchup saw Thibodeaux take on Awuzie in what proved to be a gripping encounter that the latter won 2-0. The second game of the match is where Awuzie really took hold, punishing Thibodeaux for leaving his king in the center and setting up a sneaky checkmate in just 22 moves!

For many of Thibodeaux’s fans, the result would have come as a surprise, given he has his own Chess.com club and has been cited in mainstream media claiming that chess is one of the reasons for his on-field success.

If anything, Thibodeaux finishing at the bottom of group A merely indicated that the level of chess on display was remarkably high compared to some of the legendary chess produced by the early stages of the event’s predecessor, PogChamps.

The second match between former teammates and longtime chess rivals Awuzie and Cooper required a tie-break to split the two, which Cooper won in dramatic fashion. The match was certainly the emergence of a tournament frontrunner in Cooper.

Their first game followed a theoretical line of the Sicilian Defense: O’Kelly, Yerevan System for six moves, but was marred by a mouse slip on move 10 eliciting a hilarious reaction from Awusie.

Ever the sportsman, Cooper offered a takeback, but in the interest of “making things interesting,” Awuzie rolled with the punches and, despite his opponent’s NFL rookie record of being the fastest to record 1,000 receiving yards, managed to outpace him across the board and force his opponents’ resignation with a rolling passed pawn.

The second game saw the two engage in five minutes’ worth of banter after Awuzie accidentally pre-removed his queen into oblivion, a blunder that cost him the game. Awuzie, refusing to move, tried to “ice the kicker” (in this case Cooper), using football analogies, to try and rationally explain his side of the story. The moment immediately became one of the most entertaining pieces of chess content this year. At the time of writing, the clip has received over 10,000 views on Twitch in five hours.

Despite gaining a good position in the deciding blitz game, the cornerback was again unlucky and blundered away from a great position, opening up the field for Cooper to run away with the match.

The final matchup of Pool A saw Cooper hit his stride and shut down any chance of Thibodeaux reaching the championship bracket with a sweeping 2-0 victory. Assaulting the New York Giants star’s kingside early, Thibodeaux was left with no choice but to present his best chess version of the dime defense, but was outclassed by a rampant Cooper who played with a CAPS score of 91.9!

Cooper followed up with a solid performance in the final game of the group, showing good calculation technique and winning a piece off the back of a forcing combination.

BlitzChamp’s headliner Fitzgerald was quick out of the blocks in his first match against Armstead, showing poise in his rebuttal of his opponent’s kingside escapades.

The second game seemed to be going smoothly for the “future Hall-of-Famer”; however, time pressure got the better of him with checkmate just moving away and he had to settle for a draw. The result was enough to get him over the line with a 1.5-0.5 score.

Armstead recovered well in his second match against Davis, who captured his first point of the event with a convincing win.

Unwilling to accept a 2-0 defeat, Davis surged in his second game, showing acute understanding of the Ruy Lopez and stacking up on a pin to level the match.

After showing great fighting spirit to take the match into overtime, Davis proved that he was not a one-trick pony and overcame Armstead with a brilliant remove-the-defender tactic to win his match and secure a spot in the championship bracket.

With both players already guaranteed progression to the championship bracket, the match between Fitzgerald and Davis was supposed to be a dead rubber but ended up being one of the most exciting of the day. Needing a tiebreak to separate them, it was Davis who emerged as the surprise winner after enterprising play through the middle files.

After the match, Fitzgerald gave insight into the best chess players in the NFL, foreshadowing a potential future edition of this event!

Today’s results mean that Cooper will take on Davis while Fitzgerald takes on Awuzie in the championship bracket. If the round games are anything to go by, tomorrow’s finals will make for great chess theater and give a definitive answer to the big question: Who is the NFL’s best in chess? 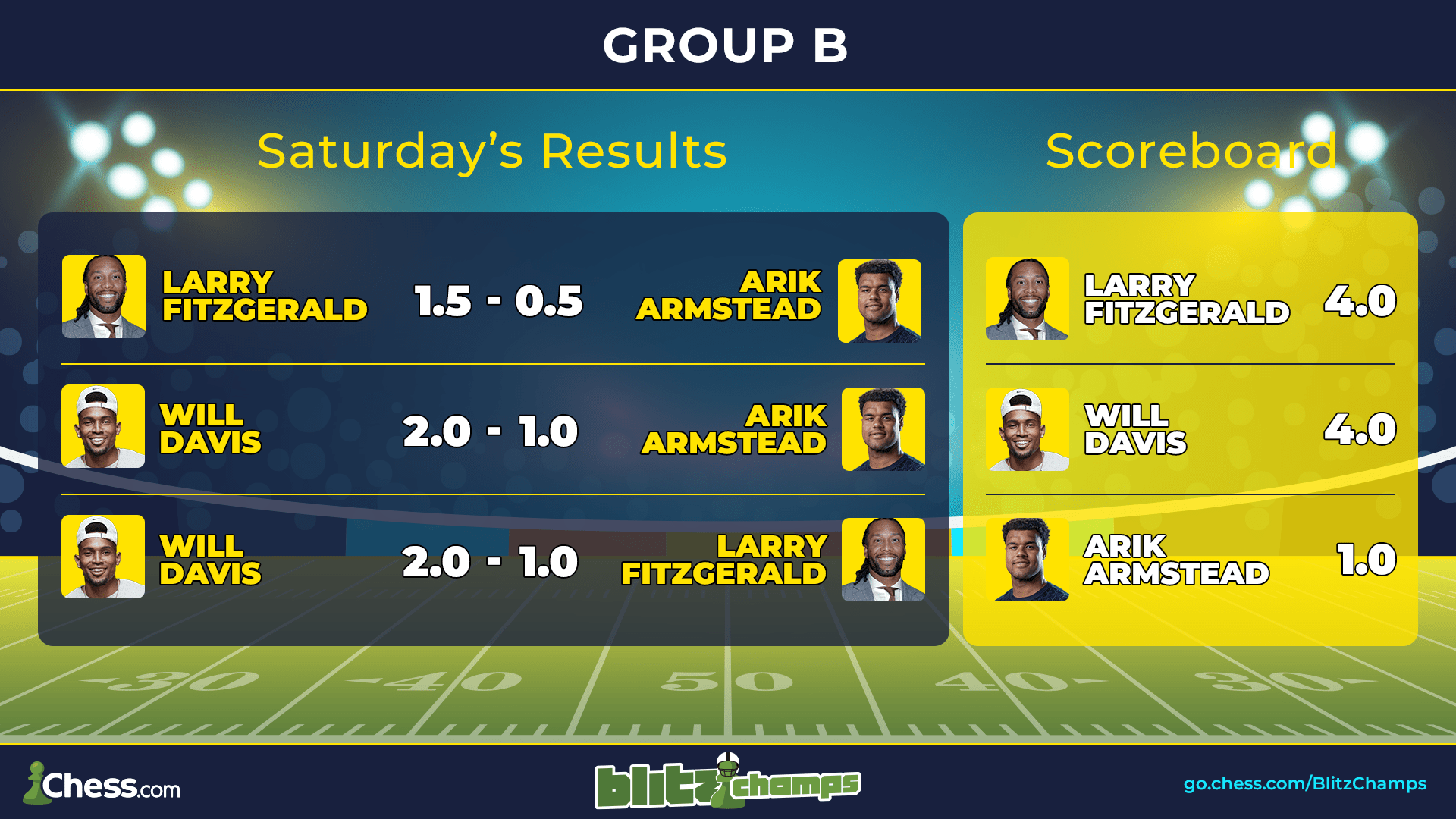 BlitzChamps is an event where NFL stars will compete in a series of rapid games to prove who has the best moves! The event is happening on July 9 and 10 at 1 pm PT, with players competing for a piece of the $100,000 prize fund for their favorite charity, not to mention the bragging rights.