The 12th-seeded Armenia held the top-seeded US to a 2-2 draw in a dramatic conclusion to a tense match involving a touched-piece blunder by GM Sam Shankland and retained the lead with 13 match points after the seventh round of the 44th FIDE Chess Olympiad. GM Gabriel Sargissian defeated GM Fabiano Caruana on the top board, and all other games also ended decisively. Uzbekistan, India 2, India, the US, Germany, and Kazakhstan are among the teams tied for second through 13th places with 12 match points.

GM Dommaraju Gukesh of India 2 maintained his clean record of 7/7 with a win with the black pieces over GM Carlos Daniel Albornoz Cabrera of Cuba. IM Conor E Murphy (2404) of Ireland continued his impressive run to defeat GM Fawzy Adham of Egypt to maintain a 6/6 score. By defeating world championship candidate GM Jan-Krzysztof Duda (2750) of Poland, GM Mark Paragua (2461) enabled his country, the 62nd-seeded Philippines, to hold fifth-seeded Poland to a 2-2 draw. In other noteworthy performances, 15th-seeded France held seventh-seeded the Netherlands to a 2-2 draw while 40th-seeded Kazakhstan defeated fourth-seeded Spain by a 2.5-1.5 score.

India surged ahead with 14 match points in the FIDE Women’s Chess Olympiad with a 2.5-1.5 win over Azerbaijan even after IM Gunay Mammadzada defeated GM Koneru Humpy on the top board. Ukraine, Armenia, and Georgia are tied for second-fourth places on 12 match points.

WIM Oliwia Kiolbasa (2376) of Poland defeated Beloslava Krasteva (2249) of Bulgaria to maintain a score of 7/7 in a noteworthy performance. However, the 15th-seeded Bulgaria performed creditably on other boards to hold the fourth-seeded Poland to a 2-2 draw. The 27th-seeded Greece defeated 11th-seeded India 2 by a 2.5-1.5 score, and the 23rd-seeded Czech Republic held 13th-seeded Spain to a 2-2 draw.

The most crucial match of the day was the top board clash between tournament leader Armenia and the top-seeded US GM Levon Aronian was rested for the encounter, not being pitted against Armenia, his country of birth.

Just under an hour and a half into the match, GM Wesley So’s game against GM Hrant Melkumyan took a dramatic turn when So’s 18.Bh6 seemingly looked like a blunder, although played after more than 10 minutes of thinking. Melkumyan succumbed to the lure and played 18…e4 in just a couple of minutes. Because So came up with a beautiful concept in return, the game is analyzed in our Game of the Day:

So’s beautiful sacrifice involving a queen sacrifice was highly praised by GM Peter Svidler who commented: “This position will be in every exercise book for the rest of eternity. It will be included in every single tactics collection from today until we no longer play chess! “

The match steadily became more tense into the fourth hour of play, as GM Arturs Neiksans declared on Chess.com’s live commentary: “There is drama happening on all three boards!”

The quick win by So was overshadowed by the top board encounter, where Caruana seemed to have blundered while approaching time control, as Sargissian won a pawn on the 34th move and went on to convert his advantage:

GM Leinier Dominguez fought hard in a topsy-turvy game to finally gain the upper hand against GM Samvel Ter-Sahakyan towards the end of the first time control to give the US a critical win.

Thus, it was left for the encounter between Shankland and GM Robert Hovhannisyan to decide the fate of the match, where the latter was trying to convert his sizeable advantage when low on time. Neiksans exclaimed, looking at the slow play by the Armenian: “Hovhannisyan is burning time!…(He) has spent quite a lot of time trying to figure out the plan. But has he!?” Shankland fought long and hard from what appeared to be a lost position at one point and arrived at the following position at the end of the sixth hour of play:

Shankland had just played 90.b3 and seemed to have achieved a draw, as the resulting queen vs. queen and bishop should be a theoretical draw. When Hovhannisyan played 90…Qg2, Shankland assumed that his opponent had played 90.Qh1+ and immediately replied with 91.Kc2 in a reflexive action. Shankland immediately realized the blunder and had to resign, as he had touched the white king and was forced to play 91.Kc1, when Black would win with 91…Qb2 92.Kd1. Instead, 91.Qc4+ would have drawn the game, and given his team a 2.5-1.5 victory in the match. Click here to see a video of the specific moment of Shankland’s blunder.

The top board of the India vs. India 3 was a clash between two close friends, GM Pentala Harikrishna and GM Suryasekhar Ganguly, who have played each other for more than a dozen times in classical games in two decades, with not a single game ending decisively. Although Hari seemed to have a slight advantage, the game ended in a draw, with GM SP Sethuraman-GM Vidit Gujrathi also following suit.

On the third board, GM Arjun Erigaisi defeated GM Abhijeet Gupta when the latter blundered in a level position:

When questioned about the game in the press conference, Erigaisi admitted that he realized 24.g5 was a mistake after playing it. He felt he had practical chances by expanding on the queenside with a2-a3 followed by b3-b4, although the position remained level.

On the fourth board, GM Sunilduth Narayanan built up a steady attack on the kingside against GM Abhimanyu Puranik. But then events developed dramatically:

The 52nd-seeded Philippines held the fifth-seeded Poland to a 2-2 draw, helped by Paragua (2461) who defeated Duda (2750) with the black pieces.

Away from the very top boards, Murphy of Ireland defeated Adham of Egypt in the seventh round, adding to the six wins in the six games he has played so far, with a performance rating of 3165. His other wins have been against GM Amin Tabatabaei (Iran), GM Matthias Bluebaum (Germany), and IM Lee Jun Hyeok (South Korea).

What is happening 🫠 Conor Murphy moves to 6/6 for the event; crushing his latest GM opponent rated 2471! This match also stands at 1.5-1.5 with @irish_tarun pressing for the match win in an even ending. @FIDE_chess @chennaichess22 #ChessOlympiad pic.twitter.com/7J6rogePrQ

Mammadzada created a huge upset by defeating Humpy on the top board in the Azerbaijan vs. India encounter:

On the second board, after trying hard in an equal-looking rook endgame, GM Dronavalli Harika missed a chance in the endgame:

Neiksans came up with a clever quote on rook endgames: “In the rook endgame, if you have an extra pawn, then it is definitely a draw. But if it’s equal, then you are winning!”

IMs R. Vaishali and IM Tania Sachdev again scored crucial victories for India, and Vaishali was elated in describing her game at the press conference. She claimed that the rook ending with four pawns vs. three pawns was the exact position that she had studied in training camp with GM Boris Gelfand prior to the Olympiad:

WIM Oliwia Kiolbasa of Poland has played in every round so far and won all of her games. Her score of 7/7 is a huge contribution to the total points scored by her team. This is her win from the seventh round: 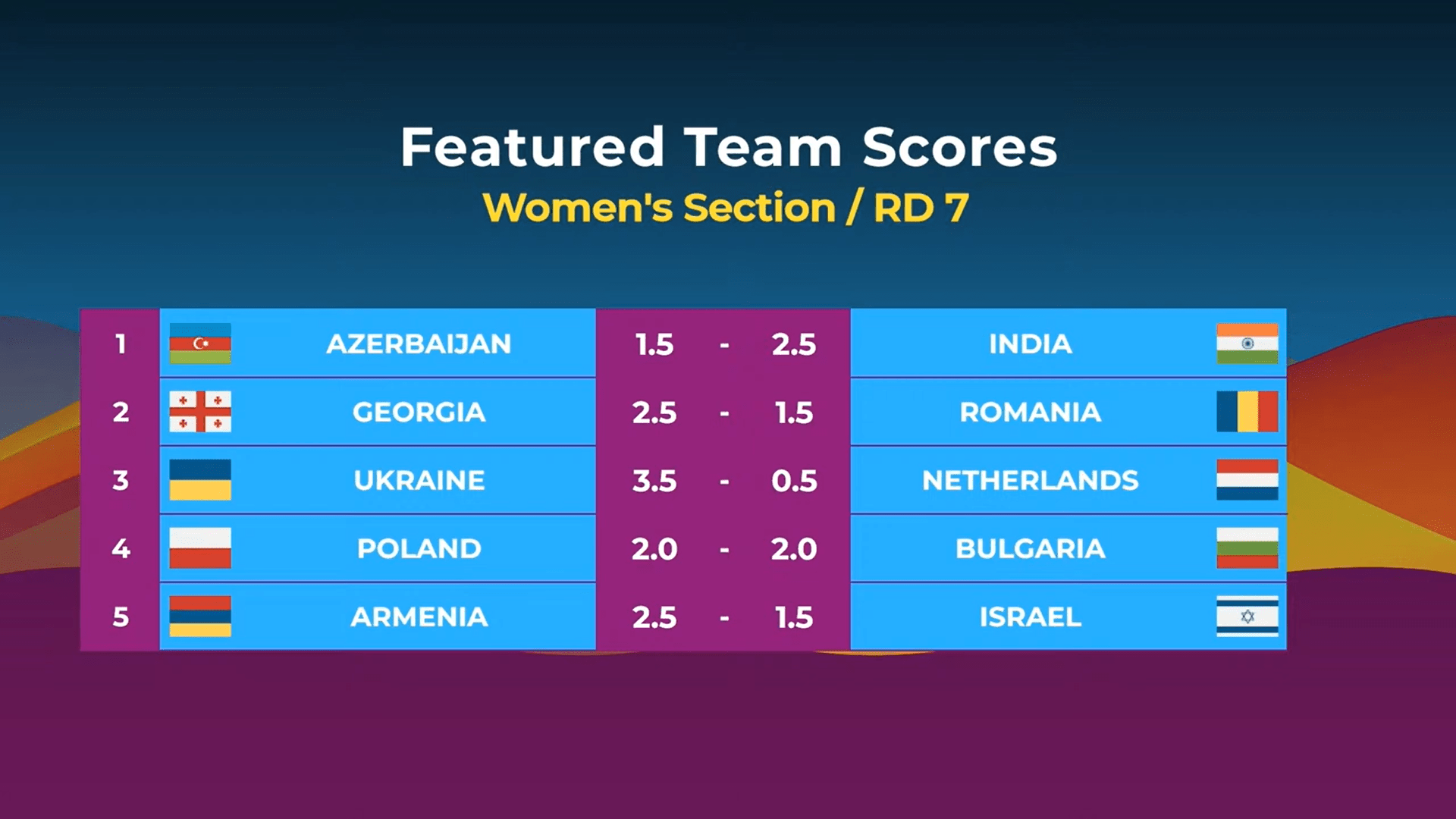