He’s consumed with everything Marvel, loves dogs and his mom’s cooking. He is also chess whiz, a prodigy, weighing in at a mere 80 pounds and having just turned 11. Meet Hrishi Vedula of Brentwood, a nationally ranked player who has been pushing his pawns around since the age of 4 and started racking up tournament points while still in kindergarten. He is endowed with exceptional abilities yet is still a child, playing gaga ball with his fifth-grade friends and watching Spiderman save the world. Hrishi, unswayed by all the adult attention, remains a grounded boy and a seriously great kid. 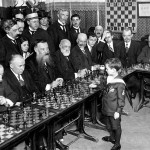 Chess is commonly played across a span that’s about half of the distance we were all expected to remain from one another during the past two pandemic years. John Elmore, president of the New Hampshire Chess Association, says Covid had two effects on chess. “The first was negative, as over-the-board (OTB) chess events could not go forward due to restrictions on indoor gatherings,” he says. Regular events were curtailed, which hurt tournament attendance. “Fortunately,” he adds, “Covid coincided with ‘The Queen’s Gambit,’ creating a second effect that appears to have been positive. There were many people who, unable to go out and pursue entertainment, picked up online chess as a hobby during the pandemic. Many players, inspired by the Netflix series, have turned a year of working on their games online into a foray into the world of OTB chess. Indeed, we have seen that, as tournaments have resumed, we are seeing healthy turnouts at adult events.”

Special thanks to Holly Gibson and Steve Martin for the use of the Kimball House at the Capitol Center for the Arts, John Elmore for arranging this interview, and Satya Vedula (dad) Jyotsna (mom) and Pranavi (sister) for all of the support regarding Hrishi.