GMs Vladimir Fedoseev and Benjamin Bok were the winners of the seventh and eighth Play-ins of the Chess.com Global Championship. GM’s Raunak Sadhwani and Rauf Mamedov each won second place respectively, joining the winners in advancing to the knockout phase.

The next rounds of the Play-in Phase continue on Friday, July 29, starting at 5 am PT/14:00 CEST and 10 am PT/19:00 CEST. For titled players who would like to join in and play against legendary GMs such as Vladimir Kramnik and Viswanathan Anand, be sure to get verified so you can play in the next event.

Fedoseev won first with an undefeated eight points, including a victory over GM Grigoriy Oparin, coming out of an exchange and a pawn ahead after a series of tactical blows by each side.

One player who had an amazing event despite not quite qualifying was FM Marco Riehle. Even though he missed round two, he won all the rest of his games up to round eight, staying within contention until the last game. On the way, he achieved upset victories against several grandmasters, including GM Maxim Matlakov in round 7.

Sadhwani celebrated his victory with his characteristic fist pump.

In the post-tournament interview, Sadhawi shared his thoughts on his opponent: “He’s definitely underrated. He’s soon going to become a grandmaster I’m pretty sure. I played him once, and he played pretty well. He’s a trickster.”

By advancing, Fedoseev and Raunak earn the chance at a minimum of $5,000 in the knockout phase along with their respective Play-In prizes of $850 and $600. Pranav earns $400 for third place. 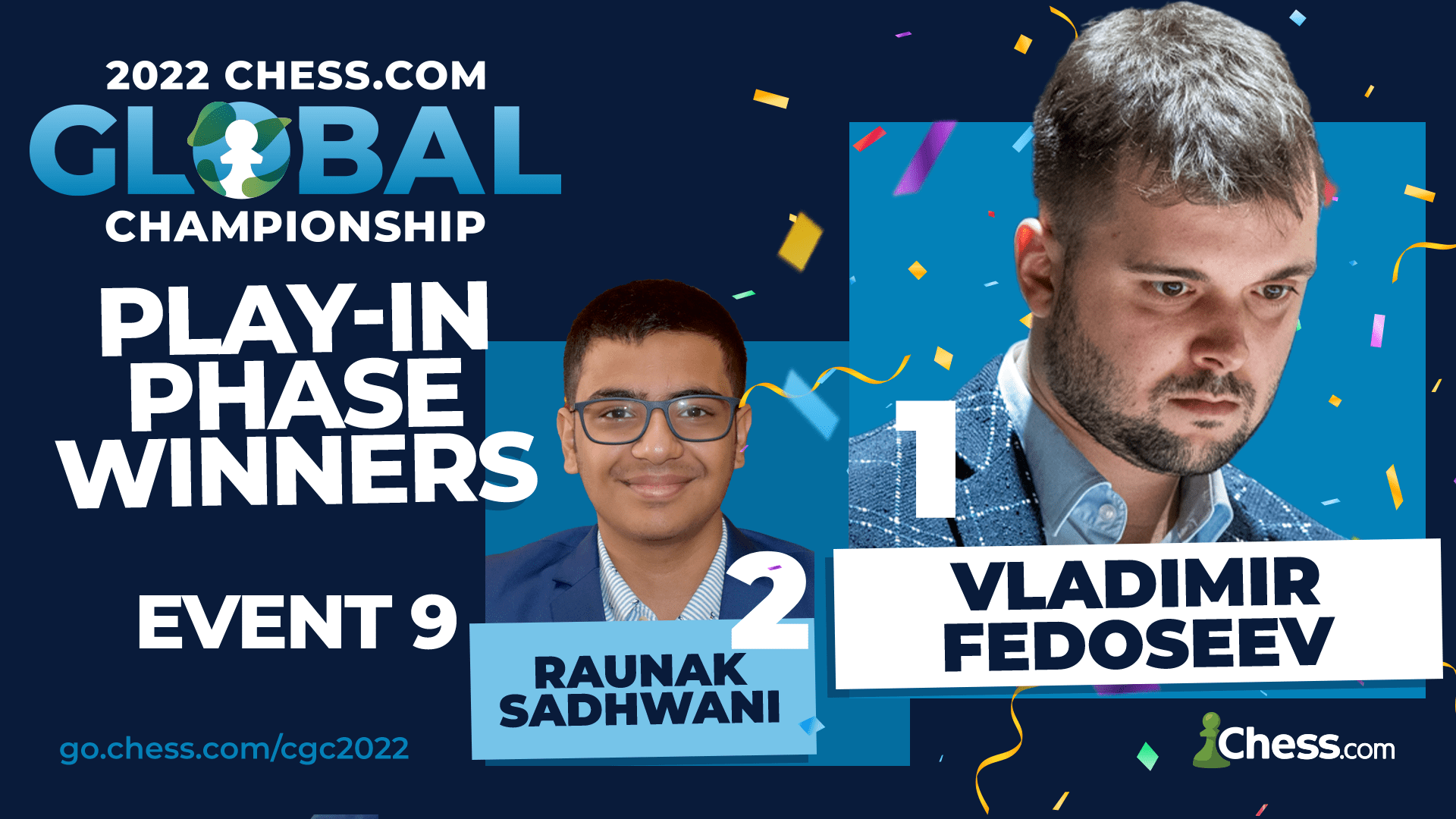 Bok took first with 7.5 points, inching ahead of a four-way tie with the best tiebreaks. This victory is reminiscent of Bok’s performance in Play-In 1 when he also tied for first in a four-way tie with 7.5 but finished out of qualification chances by tiebreaks. This time, he clinched his qualification spot in the last round by defeating GM Vugar Rasulov in a 75-move all-or-nothing duel.

One of the most impressive upsets was played by Gnel Melikyan, an untitled player who defeated Oparin with insightful endgame play.

GM Aydin Suleymanli and Mamedov finished in second and third places, giving them a new chance to duel against each other after drawing in the last round. In their first playoff game, Suleymanli discovered the shocking Rxd5! tactic, winning a pawn with practically every major piece on the board hanging.

The game ultimately ended in a draw, although Suleymanli came close to winning the pawn-up rook ending. In the second game, Suleymanli had a crushing kingside attack but overlooked a counterattacking shot by Mamedov, who soon had a crushing attack of his own.

In the post-match interview, Mamedov shared his feelings on his shocking last game: “I see my account. It’s ‘boulevard’, so I start to play boulevard chess. I see Qh6+ and see that this is my last chance… I was very, very lucky.”

By advancing, Bok and Mamedov earn the chance at a minimum of $5,000 in the knockout phase along with their respective Play-In prizes of $850 and $600. Suleymanli earns $400 for third place.

The Chess.com Global Championship is a worldwide prize event open to all Chess.com verified players. The event has a $1,000,000 prize fund and brings together players from all around the world with chess legends like GMs Alexei Shirov, Vasyl Ivanchuk, Hou Yifan, and many more. The Play-in phase consists of 16 Swiss tournaments which will award the top-two players from each event with a share of the $60,000 prize fund and a spot in the CGC Knockouts.