GM Rodrigo Vasquez and IM Denis Lazavik were the winners of the third and fourth Play-ins of the Chess.com Global Championship.

The two first-finishing players advanced to the knockout phase where they will be joined by GM Eric Hansen and GM Jeffery Xiong, who won their respective playoffs.

The next rounds of the Play-in phase continue on Monday 18, starting at 5 am PT/14:00 CEST and 10 am PT/19:00 CEST. For titled players who would like to join in and play against legendary GMs such as Vladimir Kramnik and Viswanathan Anand, be sure to get verified so you can play in the next event.

Vasquez finished first on tiebreaks, scoring 7.5/9 and finishing ahead of GMs Grigory Oparin, Hansen, and Hrant Melkumyan. The Chilean GM clutched up a win in the final round to leap ahead of his opponents after weathering the storm against 20-year-old IM Bojan Maksimovic.

NM Jan Malek was one of the chief beneficiaries of an upset, forcing a draw with one of the favourites, GM David Paravyan, in round four.

The tournament was full of thrilling time scrambles, courtesy of the lack of increment. One of the most adrenaline-packed games was the encounter between GM Hans Niemann and GM Hrant Melkumyan, which the Armenian won in a nailbiter.

Despite his efforts, Melkumyan was the unlucky player not to progress to the playoff for the second qualifier spot, leaving Oparin and Hansen to duel for the honor. The first of their two-game playoff was a messy affair, but it was the Canadian streamer who came out on top, then was able to draw the second game to secure his spot in the knockout.

In the post-playoff interview, Hansen divulged that he had only slept for two hours and that he “felt like a zombie.” To be able to play at the level he did to qualify on “pure adrenaline” showed the quality of Friday’s qualifiers. 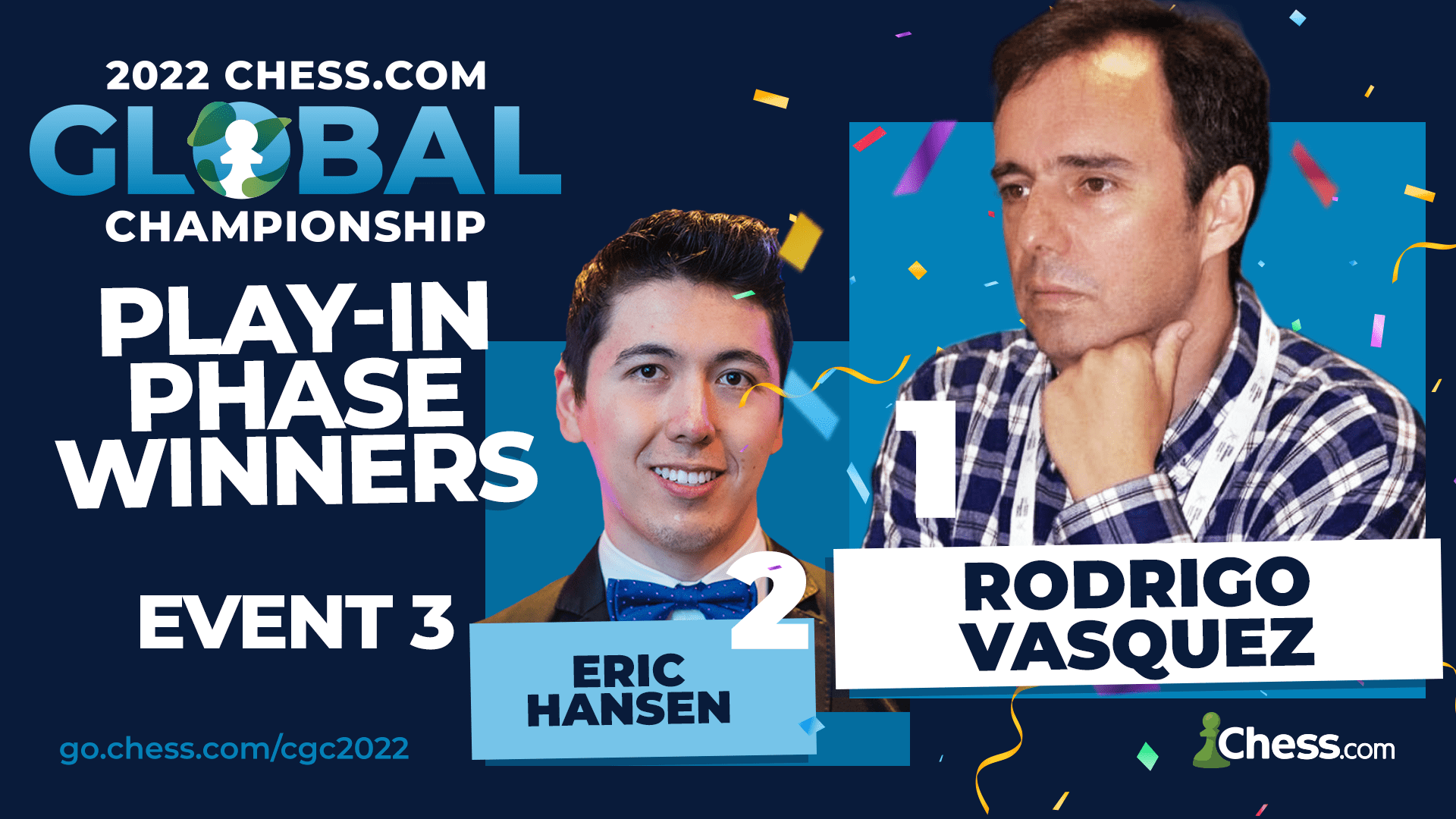 In the day’s second Play-in, first place was shared by Lazavik and GM Gadir Guseinov, with the Belarusian edging out the Azeri on tiebreak. The runner-up had to clutch up to reach the playoff, needing to win his final-round game, this time against the ever-consistent Melkumyan who was unlucky not to qualify in either event.

Lazavik’s path to victory was clean and he won a key game in the penultimate round against the eventual second-place finisher. Lazavik was able to perfectly coordinate his passed e-pawn and queen to leave Guseinov with no choice but to win his final game to remain in contention.

The playoff was a masterclass from Xiong, who provided some excellent understanding of a common pawn structure in the Maroczy Bind, tying up Guseinov’s pieces before delivering a final knockout blow to seal his place in the knockout phase.

The Chess.com Global Championship is a worldwide prize event cycle open to all Chess.com verified players. The event has a $1,000,000 prize fund and brings together players from all around the world with chess legends like GMs Alexei Shirov, Vasyl Ivanchuk, Hou Yifan, and many more. The Play-in phase consists of 16 Swiss tournaments which will award the top-two players from each event with a share of the $60,000 prize fund and a spot in the CGC Knockouts.