The FIDE Chess.com 2022 Women’s Speed ​​Chess Championship continued on Monday with a showdown between the world’s number-one ranked woman player, GM Hou Yifan, against the US women’s chess champion, IM Carissa Yip, which Hou won in a 21.5-5.5 drubbing with a dominant display across all formats.

Hou barely found herself in a worse position, and the performance was undoubtedly one of the more outstanding match performances on Chess.com this year. Yip’s youthful ardor and creativity were admirable despite the match score, and the five points she was able to pick up were phenomenal fighting games.

The next quarterfinal match between compatriots GM Harika Dronavalli and IM Vaishali R will take place July 21, at 6:30 am Pacific / 3:30 pm Central.

The hotly-anticipated match began with a worthy curtain-raiser where Hou used the initiative to force Yip to give up her queen for a rook and knight. The resulting endgame was certainly winning for Hou but proved too difficult while low on time, and it was Yip that swindled the game after the former women’s world champion lost on time!

Hou appeared to spend the early part of the match gauging Yip’s style, which was predictably both aggressive and uncompromising. After a draw in the third game and the scores sitting at 1.5-1.5, Hou decided that enough was enough and lifted her own level of play, scoring two wins back to back, including a barn-burning 26-mover in the fifth.

Yip steadied the ship with a draw in the following game but did miss the opportunity to steal a point off of her surging opponent.

After six games, Hou had re-affirmed herself as the favorite with three wins and two draws. However, Yip was hanging in the match and creating enough chaos to keep things interesting. With time quickly expiring in the 5+1 portion, Hou ran riot, winning the final three games and extending her lead to 7-2 with cold-blooded, precision chess.

Hou was not the only one celebrating the early results, and commentators Belenkaya and Santeramo were quick to note that the SmarterChess prediction, calculated by NM Matt Jensen, was spot on for the segment.

Hou’s dominant run continued into the 3+1 segment, and she was able to string together a scorching seven-game streak, lengthening her overall streak to an astonishing 10 games in a row. The run included several brilliants which had viewers spamming “Pog” and “OMG” during the Twitch coverage.

Expectations were high that Yip would close the gap slightly during the 3+1 games due to her adventurous play, which she exhibited with great success in her 2021 US women’s chess championship triumph, but Hou proved to be a cut above her contenders from that event and dealt with Yip’s romantic play. This included several opening surprises, such as the following wall of pawns and minor pieces, which Hou refuted with meticulous accuracy.

The game featured above was one of the most instructive of the match, and Hou showed how to deal with an over-extended central pawn storm.

Viewer excitement never waned in spite of the scoreline, and the final game of the 3+1 portion even featured a position where White chose not to castle against Black’s queenside castle. Santeramo found an exquisite and complex Rg4 move that was missed in the actual game.

By the time the 3+1 games had wound up, the match was all but over. Hou garnered an unassailable lead of 15-3, but Yip, the more experienced player in the quickest time control, certainly appeared to have the energy to contest her opponent as Hou had shown that her only weakness thus far was her vulnerability to flagging.

The bullet section was the closest part of the match, and Yip remained alert and eager to stop the stampede on the scoreboard. A flash of her tactical prowess and creativity was on display in the 20th game of the match, where she poetically pounced on a mistake Hou made on move 20 after employing the rarely-seen Alekhine’s Defense.

Hou only had a single mishap in the tournament when she mouse slipped her rook to a square where it could be captured. A wry smile and acknowledgment that she is human after all and susceptible to the occasional blunder will have more chess mortals resting easier…

In the end, Hou was simply too consistent and took most of her chances to put away a defeated Yip even when pressured on the clock. The 21st game of the match summed up the overall feel of the match. Yip playing creatively in the opening and gaining reasonable positions, the two duking out complex moves through the middlegame, and finally, Hou finding a key idea that allowed her to liquidate or checkmate.

The match finished with an anything but peaceful draw, which did prevent Hou from completing yet another five-game streak.

The victory has set up a mesmerizing clash between the Chinese superstar and GM Alexandra Kosteniuk, who is the reigning women’s world rapid champion and will surely go a long way to deciding the women’s speed chess champion for 2022. 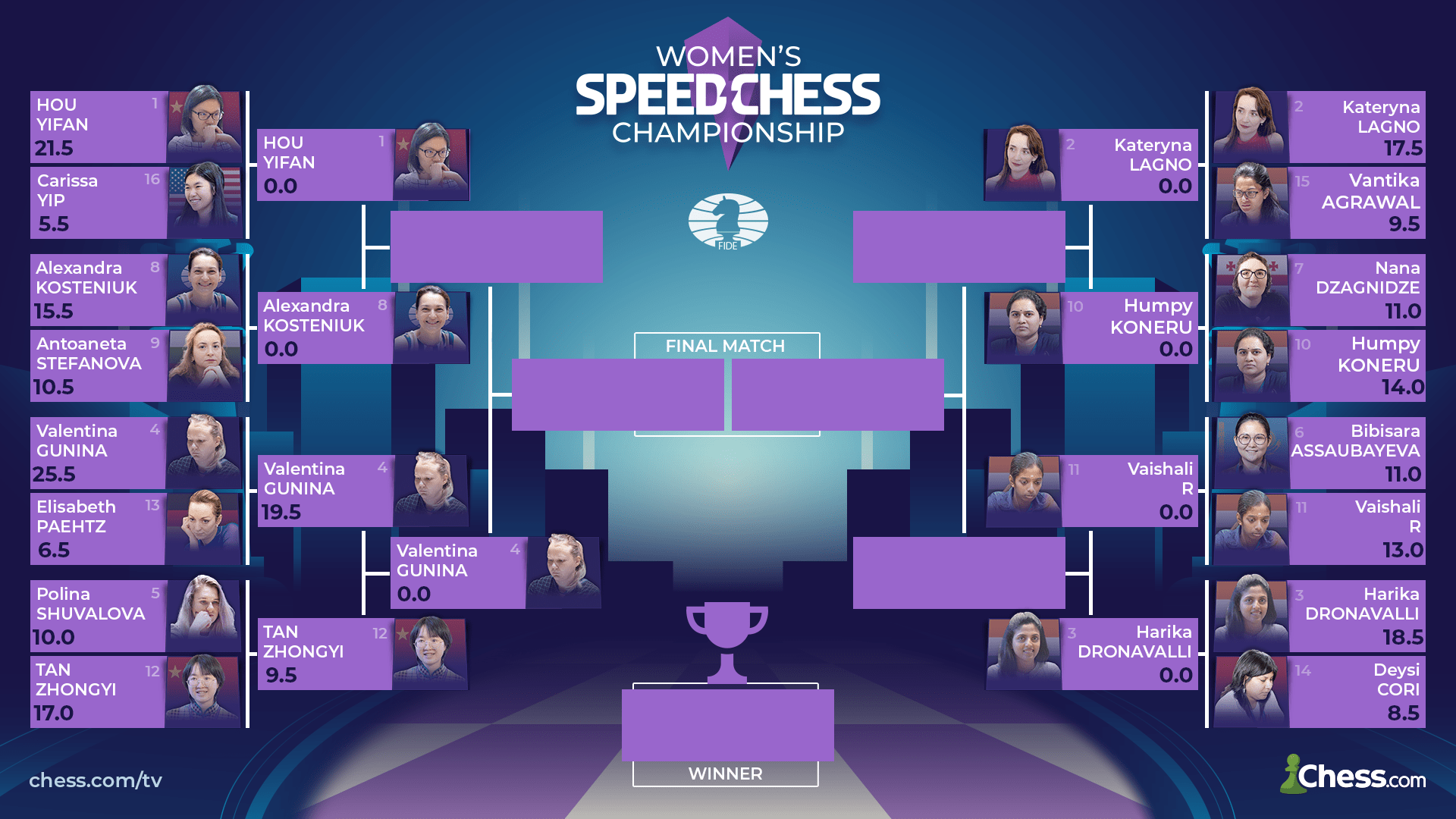 The FIDE Chess.com 2022 Women’s Speed ​​Chess Championship is an online event where titled women players will play a series of blitz and bullet matches for a share of the $70,000 prize fund. The qualifiers for the event took place on May 24-27, with the main event starting on June 13 and ending on July 21.