Continuing their remarkable run in the 44th FIDE Chess Olympiad, the 12th-seeded Armenia defeated second-seeded India 2.5-1.5 and maintained their sole lead with 15 match points at the end of the eighth round. The 11th-seeded India 2 defeated the top-seeded US by a 3-1 score.

India 2 is tied for the second-third positions on 14 match points with 14th-seeded Uzbekistan that prevailed over ninth-seeded Germany by a 2.5-1.5 score. The Netherlands, Iran, and Azerbaijan are tied for the fourth-sixth places with 13 match points.

GM Gabriel Sargissian of Armenia continued to excel on the top board by defeating GM Pentala Harikrishna of India for the deciding victory for the tournament leader. With the black pieces, GM Dommaraju Gukesh of India 2 shocked GM Fabiano Caruana of the US to maintain a 100 percent score on the top board. Gukesh reached a live rating of 2729 and entered the world top-20. He is also now the second highest-rated Indian behind only GM Viswanathan Anand.

In the FIDE Women’s Chess Olympiad, the eighth-round clash between the top two seeds, India and Ukraine, ended in a 2-2, and the former maintained their sole lead with 15 match points. Third-seeded Georgia jumped into second place with 14 match points by beating Armenia with a huge 3.5-0.5 margin. Ukraine, Poland, Bulgaria, Kazakhstan, and Mongolia are tied for the third-seventh places with 13 match points each.

WIM Oliwia Kiolbasa of Poland maintained her 100 percent score of 8/8 by beating WGM PV Nandhidhaa of India 3 for a performance rating of 2984 and helped her team to beat India 3 with a 3-1 score. The 16-year-old untitled Eline Roebers (2344) of the Netherlands defeated WGM Deysi Cori (2371) of Peru on the top board to score 6.5/8 with a performance rating of 2582 and helped her country defeat Peru by a 2.5-1.5 score.

The Olympiad arena is neither only about playing chess nor just about the players. There are arbiters, team captains, spectators, volunteers, officials, photographers, and media going about their jobs. The presence of fans is actually a wow factor, energizing the games being played and making the Olympiad itself an admirable extravaganza. Even for players themselves, there is a lot going on during the games. They like to walk around and watch their colleagues and rivals play. Even sitting at the boards, they are not really looking at the boards the whole time. Observing the arena is a pleasure in itself, looking at all that is happening away from the chessboards and being entertained.

The top-board clash between Armenia and India looked to be evenly matched on all boards, and the second-board encounter between GM Vidit Gujrathi and GM Hrant Melkumyan ended in a draw just after the time control ended. GM Sunilduth Narayanan was in difficulties against GM Robert Hovhannisyan but escaped with a draw in 45 moves.

The game between GM Samvel Ter-Sahakyan and GM Arjun Erigaisi also ended in a draw after 84 moves. This meant the top-board game between Sargissian and Harikrishna would decide the match. Sargissian held the classic double-bishop advantage against Harikrishna’s bishop and knight. Although Harikrishna is known for his strong endgame play, Sargissian fought bravely, with the players having less than a minute on their clocks and a 30-second increment at the end of the game.

On Chess.com’s live commentary, GM Arturs Neiksans commented colorfully; “Very, very unpleasant endgame, …these endgames—they don’t hold in practice…. Every single move, (Black is facing) a mathematical problem that needs to be solved in 30 seconds.” Finally cracking under sustained pressure, Harikrishna handed over the match to Armenia with a 2.5-1.5 margin:

The second-board match between the top-seeded US and 11th-seeded India 2 was the encounter of the day. The American players hold a rating advantage of more than 100 points over their rivals on all the boards. Nearing the end of the fourth hour of play, the match looked to be going India 2’s way. Only Caruana held a slight advantage against Gukesh on the top board while GM Levon Aronian, GM Wesley So, and GM Leinier Dominguez all seemed to be under pressure at some point.

After So vs. GM R. Praggnanandhaa eventually ended in a draw, Sarin in an advantageous position spurned Aronian’s draw offer around the 30th move but then decided to end the game a few moves later in a position that still showed promise for him. However, he had under two minutes on his clock, and the other boards for his team were doing well:

Soon Gukesh won his game against Caruana. It is analyzed as the game of the day:

Neiksans had dramatic words for Gukesh’s performance: “Eight out of eight? Are you kidding me!? And you are doing this against Fabi Caruana with the black color?” Then Neiksans grandly declared: “The future has arrived!”

The future has arrived!
— GM Arturs Neiksans, on Gukesh’s performance

📈 20th in the world!@DGukesh rises to become the new Indian #2 in the live ratings following his historic 8/8 start at the #ChessOlympiad! @2700chess pic.twitter.com/nVEAQzxQGg

Neiksans had words of empathy for Caruana: “He is struggling. Something is not working for him. This is not Fabi we know. Something is wrong with him.”

The going has been rough for Caruana (Elo 2783) in this Olympiad, as he has lost three games in total—with White against GM Nodirbek Abdusattarov and Gukesh, and with Black against Sargissian.

While the momentum turned against Caruana on the top board, the game between GM Raunak Sadhwani and Dominguez saw dramatic developments towards the end of the first time control. Dominguez got caught in a classic clock trap: a blunder on the 40th move:

Seeing that Caruana was in trouble on the top board, Dominguez probably wanted to fight harder for the US team, but his effort turned out to be counterproductive. Neiksans described Dominguez’s collapse: “I’ve seen this happen before, especially in team events. Your team is doing badly. You ask the question, ‘Who’s going to win it? Who’s going to win it?… I’m going do it.’ You continue to play on. Then everybody saves their games—except you! …The action turns against you.”

In other important matches of the day, 14th-seeded Uzbekistan surprised ninth-seeded Germany 2.5-1.5 with the winning effort coming from GM Nodirbek Yakubboev who defeated GM Matthias Bluebaum:

The Netherlands scored an emphatic 3-1 victory over Hungary. An important victory was scored by GM Anish Giri on the top board:

Another victory for the Netherlands came from GM Max Warmerdam who played a beautiful attacking game against GM Gergely Kantor: 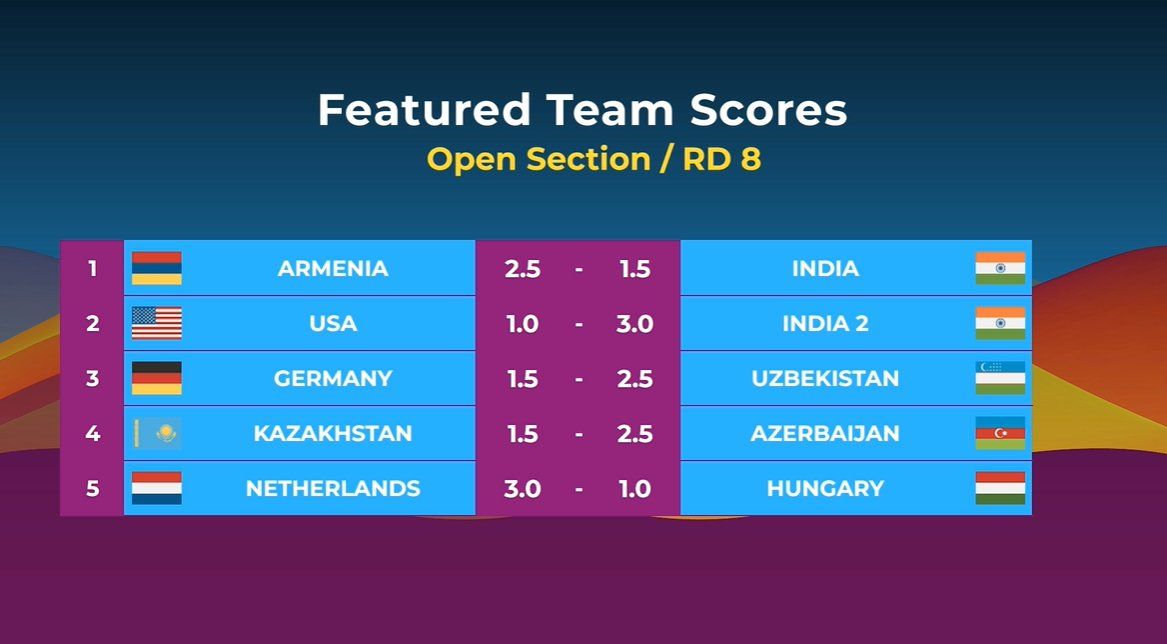 In a crucial victory on the top board over Cori, Roebers helped the Netherlands to defeat Peru with a 2.5-1.5 score and moved her towards possible title norms: 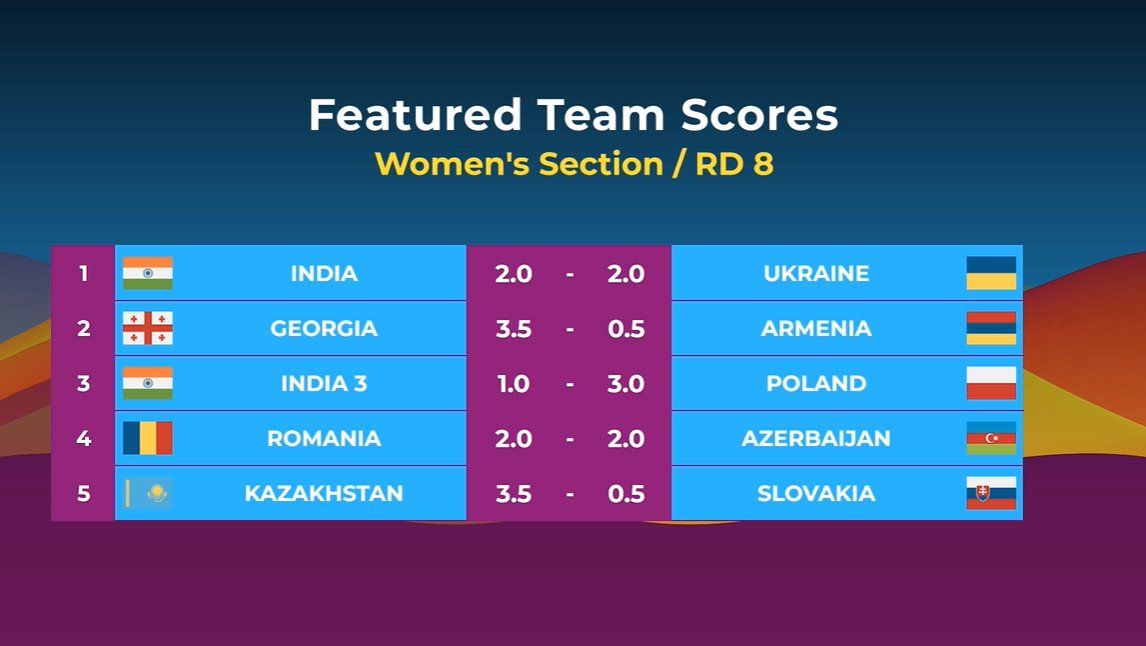