After spending the past 12 years at the Class A level, Hauser is back in 2A.

The Jets won volleyball sectional titles each of those first 11 years in Class A. They saw that streak come to an end last season.

The Columbus East and Columbus North volleyball previews ran Friday and Saturday. Here is a look at Hauser and other area teams heading into the 2022 season:

Even though the Jets have been a Class A program, they play several 2A, 3A and even some 4A schools. They went 17-15 last season, including 5-1 in winning a share of the Mid-Hoosier Conference title with North Decatur.

“We’re looking pretty good,” Hauser coach Jeff Case said. “It will be interesting to see when we get out and play against other teams. We’re a little hungrier, and they seem to be taking it pretty seriously. The girls have a lot of energy and have been working hard. We’re upbeat and ready to start the season.” 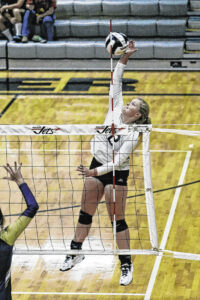 “She’s been doing great,” Case said. “It’s all coming back to here. She’ll go a long way to us trying to replace Andie Clark.”

Junior Kayden Miller will play on the outside or right side. Juniors Mattie Foster and Gracie Blair will be defensive specialists, and junior Abby Blair could play the middle or right side.

Hauser added some height in 6-foot-1 junior Paige McDaniel in the middle or right side. McDaniel, the pitcher on the Jets softball team that reached the state’s final four in Class A this spring, is playing volleyball for the first time since elementary school.

“She’s new, but she’s coming along pretty quickly,” Case said. “She adds a presence at the net.”

The Jets will host a 2A sectional this year and hope to start a new streak.

“We’re keeping things in perspective, but it’s definitely a goal we have,” Case said. “They’re goal-oriented people, and it’s something to strive for. We talked a lot about the purpose of a goal is when they get out of the journey in trying to achieve that goal.”

The Crusaders return most of their roster and have added several new players after going 2-13 last season.

“I feel like we’re a step up from that rebuilding season we had last year,” Columbus Christian coach Savannah Spurgeon said. “Hopefully, we can win a few more games this season.”

Junior Alexys Murray and sophomore Madyson Murray, who transferred from Columbus North, are outside hitters, and their sister, freshman Emma Murray plays in the middle.

“They’re going to be a pretty integral part of our rotation this year,” Spurgeon said.

Other newcomers include junior Paige Walden on the right side, sophomore setter Grace Johnson and freshman libero Eden Ridder.

“I’m super excited about the potential that this team has,” Spurgeon said. “With a lot of the new faces that we have, we have a lot more height, which is exciting. We have enough girls to field a varsity and a JV team this year, so we’re really excited about that.”

The Panthers are looking for a big season after going 16-14, including 1-5 in the Hoosier Hills Conference.

“The offseason was really good,” Jennings coach Toby Harrell said. “We hosted a league, and it was a really good turnout for us. We were very competitive. They really started to mesh. It’s looking like it will be a good season for us. They’re ready to change this entire program from top to bottom.”

Senior setter Megan Vogel is entering her fourth year as a starter, and junior hitter Charlee Barlow is entering her third season as a starter. Also back are senior Zoie Suhre and sophomore Avynn Belding in the middle and seniors Taylor Mowery and Lydia Roth at defensive specialist.

Sophomore Mallory Manowitz and junior Chloe Haeufle saw some varsity action as defensive specialists last season. Freshmen Avery Belding on the outside and Addison Martin at setter and hitter will look to make an immediate impact.

The Eagles return six regular rotational players from a team that went 11-10, including 4-6 in the Western Indiana Conference.

Senior Londyn Koester is back as a defensive specialist, and is coming off a torn ACL. Seniors Abigail Watson, Milly Patrick outside and Emma Lucas return on the outside, junior Cady Kemp is back in the middle and sophomore Madilyn Hawley returns at setter.

Senior Lizzie Roush will be on the right side after missing last year with an injury. Junior Anna Stogsdill, who moves from setter to hitter, is up from the JV, along with junior defensive specialists Ava Kelly and Marqi Satter and junior middle hitter Evie Finley. Freshman Morgan Osborn could step in at libero.

“I really do think that we have a good lineup of DSs that will help us out in case Londyn has any trouble after her injury,” Brown County coach Jessica Robertson said. “Abigail Watson I think is going to be a really good hitter for us on the outside. We have a few girls that are stepping into roles that they’re not used to playing.”

The Lancers have a new coach in Kristi Allen, who moves up after coaching the JV the past two years. She will have just seven varsity and six JV players.

Senior Gracie Crawhorn and junior MacKenzie Bieker return in the middle, junior Kyah Streeval is back at setter and juniors Jessica Walsh and Zoey Sida return on the outside from a team that went 9-21, including 2-4 in the MHC.

Sophomore Mia Dotson also played some varsity last year and will step in on the right side. Freshman Kenna Streeval takes over as the libero or defensive specialist.

“They’ve been doing well, one because we have almost all of our girls returning, and most of those girls are upperclassmen,” Allen said. “I think it’s going to be a pretty solid year, and we’re looking forward to a better year definitely than last year.”

The Cougars will look to improve on a 1-16 record that included an 0-6 mark in the MHC.

Freshman Zsophia Sharp will step in as a middle hitter. Sophomore Piper Phelps on the right side and sophomore Makayla Puckett at defensive specialist also could contribute.

The Cougars made it all the way to the state finals last season, finishing as Class A state runner-up for the second time in three years.

Middle hitter Bailey Tabeling is the lone returning senior from that team that went 30-5. But Trinity does return four sophomores who saw considerable action as freshmen last season in setter Addison Darlage, middle hitter Carson Bowling, along with Madison Keith, who moves from the right to left side and Laura Roeder, moves from defensive specialist to libero.

Junior Drew Hubbard steps in on the outside and junior Kiley Zabel could play outside or defensive specialist. Sophomore Ava Blomenburg could play middle, outside or right side, and sophomore Jordan Brewer will be backup setter and could play in the back row.

“We lost a lot of ball-control people, so we have to really work and develop that, but we have some people that I think are up to the task,” Trinity coach Faith Wilder-Newland said. “We’re young, but experienced at some positions and developing the others. Most of these kids play in club volleyball, so I think that helps a lot, too.”

The 2022 volleyball schedules for Hauser and Columbus Christian:

September 17;at Lawrenceburg Invitational;9 am