The sixth game, described by GM Bobby Fischer as his best game in the match, was likely the major turning point of the 1972 World Chess Championship. The challenger, who started the match trailing by two points, began to take control. Losing the first game and then forfeiting the second, Fischer returned to win game three, draw game four, and win game five to tie the score. After winning the unforgettable game featured in this article, the American grandmaster took the lead for the first time in the match.

Fischer was on the precipice of a sensational and unbelievable comeback. Both of his wins came with the black pieces—a rarity in a world championship match. Spassky’s play had begun to show signs of weakness, anxiety, and a decline in the confidence he exuded in the early rounds. With the score now level, the match had begun anew in a sense—but Fischer was on the upswing, having just won game five. With the white pieces in game six, a victory would come at a critical moment psychologically. The rest, as they say, is history.

Fischer, who had almost exclusively played 1.e4 during his career, famously said that this first move is “best by test.” His approximately 750 tournament games by the 1972 match had confirmed his perspective, so when he opened this game with the English Opening (1.c4), it shocked both the roughly 1,600-person audience in Laugardalsholl, where they played, and the world watching . Note that original footage of this game would not be captured as they played without cameras in the main playing hall.

While it may have been the first time most spectators had seen Fischer play a first move that was not the King’s Pawn Opening, the American grandmaster had played 1.c4 three times in the past, all in the year 1970. Fascinatingly, these early excursions into new territory featured standard English Opening play with the d-pawn never being pushed two squares even once.

Thus, with the exception of unrecorded games or simultaneous exhibitions, it is fair to say that the first time Fischer had ever played the white side of the Queen’s Gambit in a classical game was at the world championship!

The challenger would repeat this opening (1.c4) three more times in his seven remaining white games of the match, showing that this was clearly more than a one-game surprise. Despite unleashing an opening he was less experienced in, Fischer went on to play a near-perfect game of chess and outclass the reigning world champion “in his own backyard,” so to speak. Chess.com’s Game Review feature claims just one clear mistake by Spassky in the entire game—and none by the challenger. 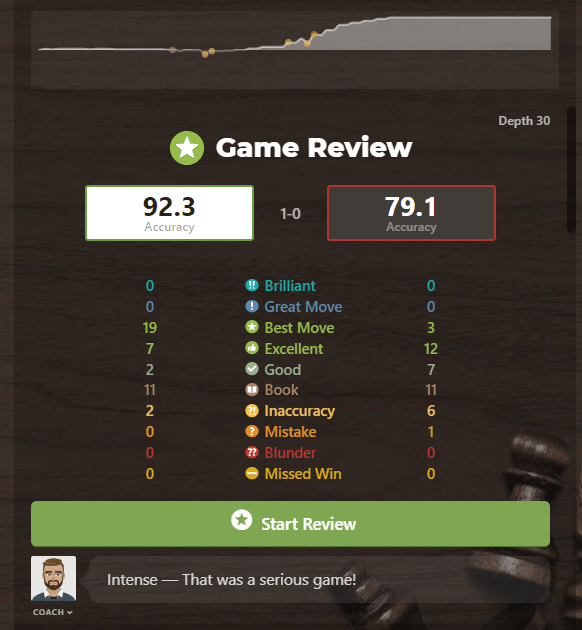 “And it seems to me that Spassky’s defeat is largely due to the fact that he lost the psychological duel. It was not so much that Fischer changed the match conditions, but rather that he simply broke Spassky. He began dictating the conditions off the chessboard , and then also on it!”

He began dictating the conditions off the chessboard, and then also on it!

“It was a game like a symphony,” said GM Miguel Najdorf, while GM Svetozar Gligoric called attention to this fact: “It seemed he knew the whole line better than Spassky, although Spassky has played that line many times in past tournaments as Black .”

What started as an English Opening on move one quickly transposed into Queen’s Gambit territory as Spassky opted for the Tartakower Variation—in which he had never lost. Creating a pin on the a3-f8 diagonal with 13.Qa3, Fischer began to pressure what would become hanging pawns on c5 and d5.

After Fischer struck in the center with 20.e4!, Black’s most clear positional error in the game occurred: 20…d4?. This unfortunate move opened the c4-square for the light-squared bishop, left a weak pawn on e6, and allowed White an attack with a future f4-f5. In comparison, the other reaction to the central tension (20…c4) would be better. This moment allowed Fischer to take the initiative.

While Spassky could have defended more resiliently after this point, the position was already clearly better for White objectively, and Fischer never let go of the advantage. Combining threats against a weak black king, pushing a powerful passed e-pawn in the later stage, and maintaining a perfect blockade on all of Black’s pawns, Fischer played a masterpiece of a game from the first move through the end. The exchange sacrifice to finish the game fits nicely as the cherry on top.

To many experts, the sixth game is the best of the match. Some even place it as one of the best games in the history of chess. Many stories are told about it, and I can vividly remember my father trying to convince me that Spassky, along with the audience, applauded Fischer when the game was over, something that my combative child’s heart refused to believe.

I’ve analyzed this game many times. What always strikes me is Fischer’s precision when the position comes down to his favorite elements: a bishop against knight struggle, with no counterplay for the opponent. It’s surprising that Spassky plays with uncharacteristic passivity—he seems to accept his fate without trying to change the character of the game in the many opportunities he had.

After the game, Spassky famously joined the audience in applauding Fischer on the win, a scene dramatized in the movie Pawn Sacrifice. Actual footage of this would not be available, again, because Fischer had successfully excluded cameras from the playing hall. Seen by Fischer as a sign of sportsmanship but not by the Russian side, Spassky’s applause would signify a turning point in morale for the two players—and, in hindsight, would foreshadow a dominant performance by Fischer in the rest of the match.

What is the most memorable aspect of this game to you? What is your favorite move? Please share your thoughts and reactions in the comments below!