The semifinals of the FTX Road to Miami tournament will see the matches GM Jan-Krzysztof Duda vs. GM Levon Aronian and GM Wei Yi vs. GM Richard Report. In three of Thursday’s quarterfinal matches, the younger player took the lead but then was eliminated after all.

This way, the tournament said goodbye to the top-two finishers of the preliminaries, GMs Sam Sevian and Arjun Erigaisi, while GMs Jeffery Xiong and Anish Giri also didn’t advance.

How to watch? The games of the FTX Road to Miami knockout can be found here as part of our live events platform. The rounds start each day at 9 am Pacific/18:00 CEST.

By winning the preliminaries, Sevian was automatically paired with the player finishing in eighth place. After three games, he seemed well on his way to knock out Wei, who couldn’t win his two white games and lost as Black.

The Chinese player, however, managed to win on demand (scoring his first win in 12 rounds) to force a tiebreak of two 5+3 games. This time, he did win as White, using 1.b3 and eventually winning in a middlegame with opposite-colored bishops:

Here it was Xiong who took the lead in game two, but Rapport struck back right away, so both won with the black pieces. With draws in the other two games, this match also went to tiebreak, where Rapport won both games.

In the first, he laid the foundation by winning with the black pieces, using the always interesting King’s Indian:

You guessed it: here, it was Erigaisi who started with a win—an excellent game by the 18-year-old grandmaster, by the way. After a draw, Aronian won with the black pieces and then decided the match before the tiebreak with another win as his opponent erred in a queen endgame:

Aronian didn’t think experience prevailed in this match, saying: “Nowadays young players play so much online chess. I’m not sure who is more experienced, me or him in online chess!”

It must have been painful for the Dutch grandmaster, maybe not to lose this match, but the way he did it. After a draw in the first game, Giri built up a winning advantage but blundered it away in one move:

In a must-win game, Giri got a King’s Indian-like structure as Black and that meant there were definitely some dynamic chances. However, he waited too long with the typical pawn break …g5-g4 and, in fact, because no piece trade and no pawn move was made at all, the game ended in a draw because of the 50-move rule.

Afterwards, Duda said: “I was actually hoping that … perhaps there was a chance that he didn’t realize there was 50 moves coming, so I was kind of trying to discourage him from playing …g4, or .. .a6, some pawn moves.” 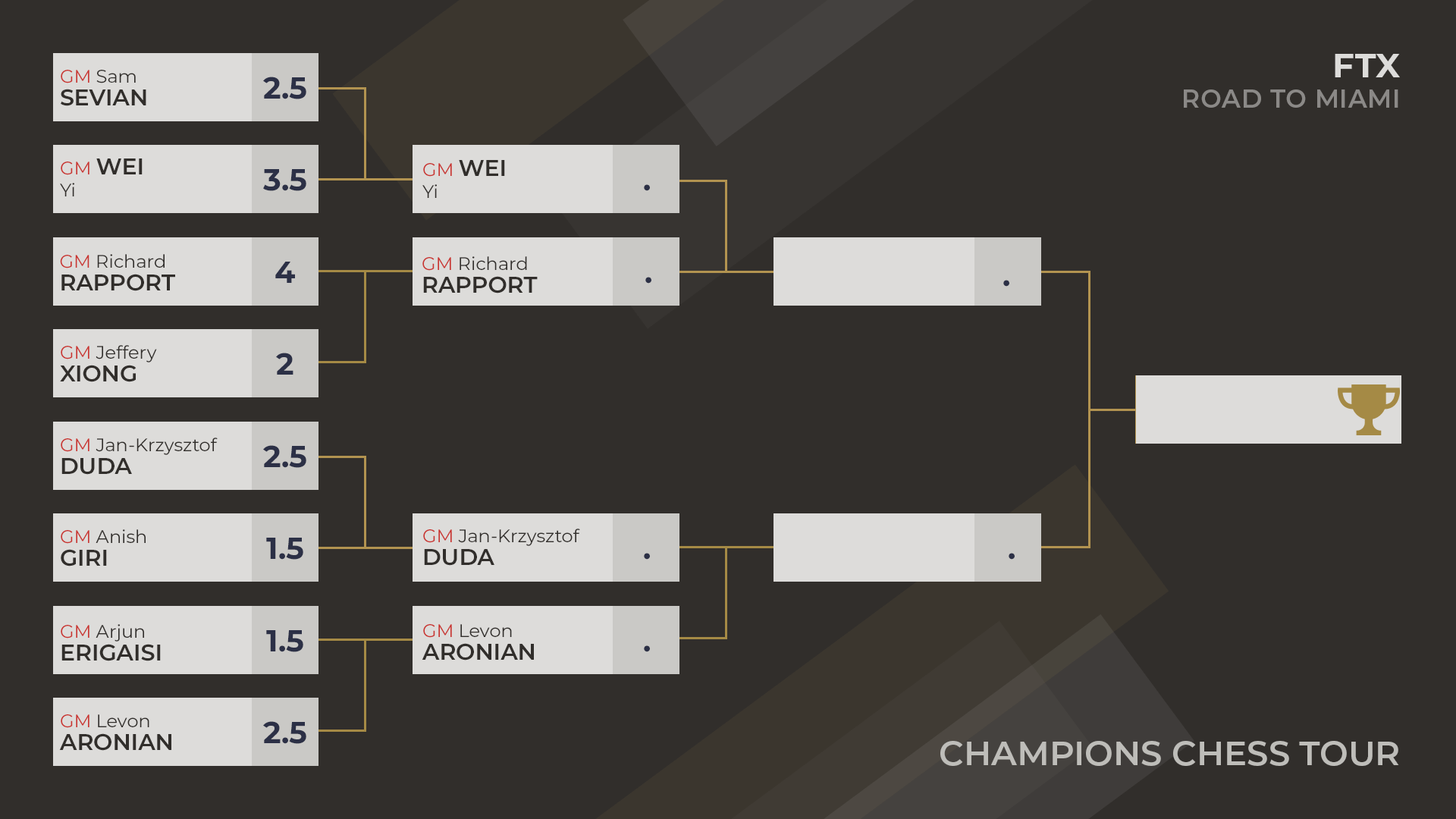 The 2022 Champions Chess Tour’s fifth event, the FXT Road To Miami, takes place July 10-17, 2022 on chess24. The preliminary phase is a 16-player rapid (15|10) round-robin. The top eight players advance to the knockout phase that consists of two days of four-game rapid matches, which advance to blitz (5|3) and armageddon (White has five minutes; Black, four with no increment) tiebreaks only if a knockout match is tied after the second day. The prize fund is $150,000.