Call a chief guest to a chess event and invariably he spends a few minutes reminding the gathering how India gave this cerebral sport to the world. If the guest of honor happens to be from the judiciary or is a politician, then get ready to hear how they weave chess into their speech and declare how they make each ‘move’ after due consideration of the possible consequences.

Mercifully, none of this happened when the All India Chess Federation approached the Tamil Nadu Government to consider the possibility of hosting the 44th Chess Olympiad in Mahabalipuram in July-August. A forthright confirmation followed once Chief Minister MK Stalin verbally approved the idea.

As a result, within four months, the stage was set for the global event with the participation of 187 countries. Probably, the last 43 editions of the biennial event have not witnessed anything quite like this.

From finalizing the venue to the choice of trophies and medals, everything is planned meticulously. Accommodation for players/delegates/guests/volunteers, transportation, Opening and Closing ceremonies and the technical conduct of the event was approved, fine-tuned and responsibilities delegated to the different heads of the task force. Special attention is being paid for promotion. In short, nothing is left to chance.

Probably, the last 43 editions of the biennial event have not witnessed anything quite like what they stand to in Chennai’s case. | Photo Credit: Special Arrangement

In the past, Olympiad hosts have gone for an Opening Ceremony lasting around an hour. The quality of accommodation has varied from budget hotels to three-star for most teams. At times, for example in Turin, in 2006, the Winter Olympic Games village was used to provide accommodation to the visiting contingents.

The TN Government and the AICF finalized some notable hotel properties on the East Coast Road for accommodation, closer to the venue of the mega event.

The banquet hall at the venue proved to be clincher but it was also decided to build a second playing hall, at the cost of around Rs. 5-6 crore, in front of the existing hall. If the first hall was approved for being 22,500 square feet in area, the proposed second hall covers around 45,000 square feet. Provisions are in place for an Expo Area, FIDE Pavilion, AICF Pavilion, VVIP lounges, Sponsors’ Pavilion, designated areas for publishers of chess literature, ornamental chess-set makers and more. 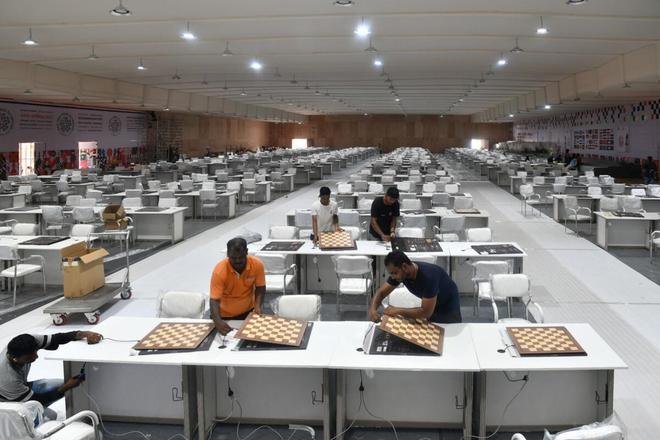 Technicians are installing the CHESS DIgital board on the player’s tables at the 44th Chess Olympiad to be held at Mamallapuram from July 28th to August 10 in Four Points Hotel by Sheraton. | Photo Credit: Velankanni Raj B

Given the participation of around 1700 players plus coaches/officials, besides arbiters, special guests, delegates for FIDE Congress, volunteers etc, around 1800 rooms in the nearby five-star hotels and another 650 in four-star properties are blocked. Another 500 rooms, in three-star and two-star hotels, are reserved for volunteers and invited winners of the age-group chess tournaments held in all the States to mark the Chess Olympiad.

The TN Government has made special boarding and lodging arrangements for members of the police and health departments during the event.

Keeping in mind the tastes of players/officials from over 180 countries, the menu for the entire duration of the event is meticulously planned by hand-picked chefs of some of the finest hotel brands.

No effort is spared to provide timely medical help during the event. Besides the mandatory Covid-19 protocols, plans are in place for ambulances near every hotel, with the doctors and the nurses available 24×7.

Calls can be made to toll-free numbers for assistance of any kind. The service, besides in English, is offered in Spanish, French, Russian, Malay, German and Japanese. Around 415 selected volunteers have been trained to deal with the needs of the visiting teams.

After the traditional welcome at the airport, the guests, on checking into their designated hotels, will be presented with a welcome kit and the necessary accreditation card at the hotel. They will also be offered complimentary high-speed internet services and laundry for 3-4 pieces of clothing every day.

The TN Government has made special arrangements at the Chennai Airport for speedy processing of arrival protocols. Dedicated conveyor belts will be used for guests arriving for the Olympiad.

Transportation is a major part of the logistics and the promised arrangements appear very impressive. Nearly 125 buses from Benz, 100s SUVs and six high-end luxury cars will facilitate the movement of the players/dignitaries during the event. Special air-conditioned waiting areas at the parking lot will be prepared for the benefit of the guests.

A dedicated corridor is planned on the highway for the smooth movement of the buses/SUVs that carry the players/officials to and from the venue. The road from Chennai airport to Mahabalipuram is being widened and beautified. Welcome gates/hoardings are also being planned along the way. In fact, Chennai’s iconic Napier Bridge has already undergone a chess makeover.

Chennai is gearing up to host its first Chess Olympiad. Have you spotted the preparations?

For the two-hour gala Opening Ceremony, Chennai’s Jawaharlal Nehru Stadium has been finalized. The TN government’s guests include several imminent personalities from the State and the film world with composer AR Rehman roped in for a live performance.

Although the Closing Ceremony, too, is proposed at the same venue, the AICF has requested the TN Government to consider holding it on the beach of one of the seaside hotels near the venue. This plea is to make it easier for those guests, due to leave for home, to head straight to the Chennai airport with their luggage, instead of carrying it all the way to the Stadium and then traveling back to board the flight.

Financial bonanza awaits the members of the Indian team following a never-before sponsorship of Rs. 2 crore. The TN Government has footed half the amount with Indorama and State Bank of India contributing Rs. 50 lakh each.

The live broadcast of the games, which is one of the most important components of the event, has been given the attention it deserves. Around 700 digital boards will be used, covering every single game, as part of the live coverage on various platforms. Commentary will be available in at least seven languages, including Tamil. Judit Polgar, Peter Leko and some of the leading commentators will be part of the broadcast team. A deal with DD Sports is likely to be signed for the live telecast of the event in the country. Around 200 arbiters, including 80 Indians, will ensure smooth technical conduct of the Olympiad. Cultural activities are planned daily for the benefit of the guests every evening. Meanwhile, the AICF plans to organize quiz contests for the visiting spectators.

Plans are also afoot to not only present the customary trophies and medals but also give away specially-crafted trophies to the podium finishers.

Clearly, this scale and magnitude in organizing an edition of Chess Olympiad is going to be unprecedented. No wonder, Budapest, the host in 2024, will find it very tough to match the organizational marvel that this edition promises to be.