DYERSVILLE — It’s a sunny June day as brothers Andy and Adam Rahe walk to right field of the famous rural ball diamond from the 1989 film classic “Field of Dreams.”

The brothers, who have been farming at the site for years, stop at the outfield grass, and Adam notices several cornstalks trampled on the ground. He asks his brother what happened.

“Somebody knocked a bunch of corn down,” Andy says as he shakes his head.

It’s a common occurrence at this northeast Iowa tourist destination.

Film buffs and baseball fans from across the country visit the field and its surroundings. Among the first things they do is run to the outfield grass and step into the mystical cornfield, just like Kevin Costner did in the film when he heard that celestial voice.

There’s bound to be incidental damage.

“We fight that where people are walking down through the corn and they don’t think, ‘Well, I just knocked over a piece of corn,'” Andy said.

Most people don’t give it a second thought. After all, it’s a cornfield, not a pristine French garden.

But to Andy and Adam, it may as well be. They are the people tasked with growing and maintaining America’s most famous cornfield. They have poured countless hours into nurturing the corn, and they notice every little thing — every perfection and imperfection.

“It looks good,” Adam said of the corn in late July.

Their work will be front and center on national television once again during the Tuesday and Thursday Minor League and Major League Baseball games to be played at the stadium near the original iconic diamond.

“They are two of the most important people that work with us here,” said Dan Evans, chief operating officer of Go the Distance, the company that owns and operates the movie site.

The opportunity to farm the land was ‘pretty cool’

Visitors come expecting to see a re-creation of their memories from the movie: the original ball diamond and the white farmhouse nearby, plus now the new stadium, and around it all, the corn.

In the film, Kevin Costner plays a struggling Iowa farmer who plows over his corn to build a baseball field for the ghosts of Joe Jackson and other members of the banished 1919 Chicago White Sox to play on. Jackson and his teammates, who were tossed out of baseball for allegedly throwing the World Series, come out of the corn and play on the diamond. 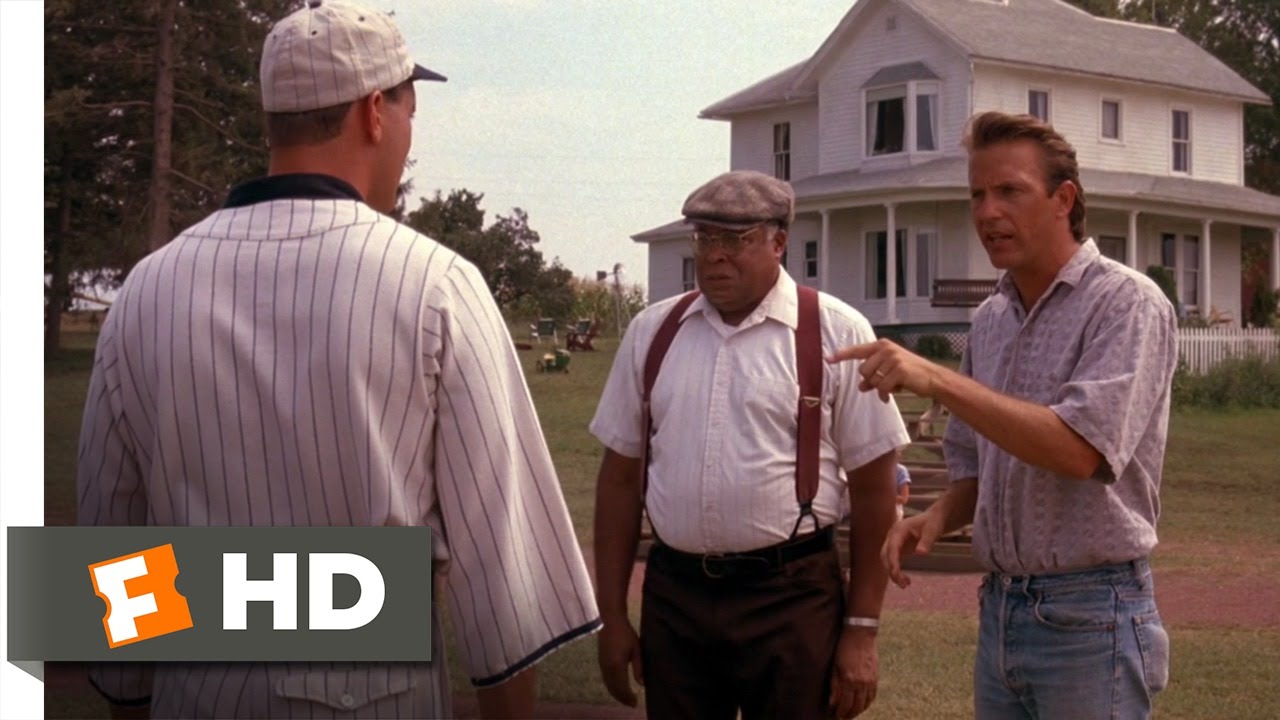 The scenes of Jackson and his teammates appearing and disappearing from the cornfield are among the movie’s most memorable moments. So naturally, the corn has become a magnet for the tourists who flock to the Dyersville diamond.

The Rahe family has farmed in the area since before the movie was made. Andy and Adam Rahe’s uncle, Keith, ran the left and centerfield parts of the park, which were owned by the Ameskamp family. The Lansing family owned the remainder of the property, including the house.

Keith, along with Andy and Adam’s dad, John, farmed the Ameskamp part of the property and helped carve a maze for visitors to walk through. Keith also started the ghost player games, where people dress up as 1919 White Sox players and compete in games on the field.

When Andy and Adam got old enough, they helped their dad and uncle with the farming and with maintaining the maze until Rita Ameskamp sold the remainder of the property to the Lansing family in 2007.

Amuse:What channel is the 2022 Field of Dreams game? How to watch the MLB game between the Cubs and Reds

They got another chance to work the land when Denise Stillman, who had founded Go the Distance, bought it and needed someone to farm it. Stillman knew about the Rahe family’s history with the park, and in 2012, she asked Andy and Adam.

They jumped at the chance, and have done it ever since.

“It was pretty cool,” Adam said.

They don’t take the task lightly. They understand just how important the corn is to fans and the community. Around 250,000 people visited the site last year from across the nation and around the world.

Many just want a picture with the corn. So Andy and Adam want to make sure they do everything they can to make it perfect.

“We take a lot of pride in all our farming,” Andy said. “But we take a little extra pride here too.”

Amuse:Yes, the Field of Dreams is a real place — and it’s in Iowa. Here are 13 things you should know.

How brothers care for the ‘Field of Dreams’ cornfield

The two invest many hours into a process they have perfected.

It begins in the fall, when they till the land and put nutrients down after they’ve finished harvesting. They pick a specific seed corn: It needs a good root structure to help it withstand the wind and protect it from diseases. And it needs to produce the perfect type of dark green coloring.

Planting starts in April. Then they monitor the corn as it grows, providing water and nutrients when needed and controlling weeds.

Andy and Adam pay special attention to the rows closest to the parks. Sometimes that means putting down plant food and irrigating.

“It takes a little more TLC,” Adam said, “like a garden.”

The two carefully walk through the corn daily, usually as early as 5 am, and then later in the evening as it gets dark, to make sure nothing has been damaged.

Amuse:In its second year, will they still come? Iowans jump at chance for 2022 Field of Dreams game

Even in the offseason, they notice every little thing about the corn. Last winter, they spotted footprints from fans who had tried sneaking over from the movie site field to the big league park. During the spring, Adam discovered a baseball belted into the corn either from batting practice or in the game. He kept it as a memento.

While the cornfield is a tourist attraction, it’s still part of a working farm. Once harvested, the corn is used for ethanol, feed for livestock and whiskey.

Balancing farming and tourism isn’t easy, but insiders say the brothers have perfected it.

“These guys are magicians,” Evans said.

The brothers added another big project to their workload in 2019 when MLB announced it was building a stadium near the movie site diamond for a regular season game in 2020 between the White Sox and New York Yankees. The game was pushed back to 2021 due to COVID-19.

MLB enlisted the brothers to help. They did a little bit of everything: They stored MLB’s equipment and did frequent checks on the field. They made sure no one wandered over to the field before it was open to media and then fans.

They even transplanted corn from other spots to fill in empty areas around the big-league stadium’s scoreboard and videoboard.

They had to hand plant and hand harvest near the outfield fence, since equipment can’t get too close to it.

Andy and Adam also cut some of the corn to create a path for visitors to walk through from the movie site diamond to the big league field. The walk to the park became one of the most popular parts of the trip for fans and even big leaguers who strolled down it before last season’s game.

Amuse:Big changes are coming to the ‘Field of Dreams’ site. Can new owners maintain its mystique?

The two had to keep their work under wraps and off social media as MLB tried to keep anyone from getting an early look at the stadium.

“We couldn’t ask for better partners,” said Murray Cook, the president of BrightView Sports Turf Division and an MLB consultant who oversaw building the playing field.

But their biggest contribution came the week of last year’s game, when a storm battered 1,100 cornstalks two days before the game. Andy, who lives near the ballpark, raced over to the site to check the damage.

He called Adam, and the two came up with a plan. They stuck fence posts in the ground, stood up the wind-felled cornstalks and zip-tied them to the posts. Andy and Adam stayed up until around 11:30 that night working on the corn. They came back at 7 am the next day to continue rigging up the cornstalks.

Viewers of the game and visitors to the park never knew any better.

When the game started, fans, players and broadcasters marveled at their work. Then FOX Sports analyst Ken Rosenthal gave them a shout-out for their last-minute hustle. Their phones started filling up with texts — “friends from college that I hadn’t heard from in 18 years,” Adam said.

Amuse:Hunting for 2022 Field of Dreams game tickets? These are the cheapest seats.

Andy and Adam prepare for another big August

The brothers are busy at the park again, this year preparing for two games. The first comes on Tuesday, when the Cedar Rapids Kernels and Quad Cities River Bandits will play a Minor League Baseball game at the park.

Two days later, the Chicago Cubs and Cincinnati Reds will play, in front of thousands of fans in the stands and millions more on TV.

Once again, all eyes will be on the game… and their cornfield.

“Every farmer takes a lot of pride in all the work,” Andy said. “Everybody does because it’s a lot of long hours, and you have to really want to be motivated because there’s nobody telling you to wake up and go do it.”

They hope the days leading up to this year’s games will be more relaxing. They’re doing what any seasoned Iowa farmer does: hoping for good weather.

“Life trains you to be on the front side,” Adam said.

The corn is always on their minds. Such is the case when Andy rewatches the film. He can tell how dry it was in Iowa that summer. Some farmers had to irrigate their corn that year, and Andy can tell where the water ran out.

“As farmers, we all pick out every little detail,” Andy said.

Last August, as they sat in the stands at the historic MLB game, the first ever played in Iowa, they took in the sight of the pristine playing field and their lush, green carefully tended cornfield as the backdrop.

“When everybody’s out there, it’s such a neat, neat thing,” Andy said. “It’s something you want every baseball fan to enjoy.”

Tommy Birch, the Register’s sports enterprise and features reporter, has been working at the newspaper since 2008. He’s the 2018 and 2020 Iowa Sportswriter of the Year. Reach him at tbirch@dmreg.com or 515-284-8468. Follow him on Twitter @TommyBirch.