ChessBrainiac is a talented young chess player who’s aiming for the NM title in the near future, with a current USCF rating of 2121. Just over a year ago, he started streaming his chess journey on Twitch, reaching milestones like a 2700 blitz rating and gaining over 6,000 followers in the process. We spoke to James (his real name isn’t Brainiac, believe it or not) to find out more about his stream, his community, and how to make a positive impact on the world by streaming chess.

Chess.com: How long have you been streaming chess, and what made you decide to start?

ChessBrainiac: I started streaming around 15 months ago. I was watching a lot of streams and just loved being on Twitch in general. I was also a big fan of Arena Kings, and loved watching people play it. A few seasons later I realized that there was a new requirement: if you were going to play in Arena Kings, you’d have to stream it. So I thought, okay! I can combine streaming with a tournament that I love, so let’s try it out.

I had to wait until I was 13 before I started streaming… I was definitely considering streaming before that, but obviously, I couldn’t (due to Twitch’s terms and conditions)!

What’s your favorite thing about streaming?

I definitely love building my community up, and enjoy slowly seeing more and more people coming in and chatting. The social aspect of it is amazing; I love how you get to engage with your viewers, have fun, and have a conversation with them.

If you’re just playing chess by yourself, it can sometimes get a little boring! Streaming things live really adds another dimension. I feel like sometimes you just need to find fun in chess, and streaming can definitely provide that. I love sharing my passion for the game; I started playing when I was around six years old and have basically been hooked since then.

Who are some of your own personal favorite chess streamers, and why?

Before I started streaming I was almost exclusively watching Levy and Hikaru. They definitely inspired me to start streaming. Seeing the collaboration between them was great. Levy wasn’t that big of a streamer, but they had great collabs and he grew insanely. That inspired me to start! I thought: ”Hey, I could get similar growth.”

Now I actually still watch a lot of streamers, but since then I’ve expanded my list. Nowadays I regularly watch the Chessbrahs, Hikaru still, and Daniel “Danya” Naroditsky. Those would be my top three favorite streamers at this moment in time.

Every streamer’s sub-community is unique. How would you describe your community?

Great question! We mentioned Levy… I feel like sometimes my community is a bit similar to his, in that they definitely like to have fun at my expense occasionally! That’s kind of what Twitch is about though. My community definitely has that aspect to it, but on the other side of it, it can be very wholesome.

I have some younger viewers as well as some members of the older generation watching, who are very supportive and kind. They definitely pick me up when I’m feeling down. I’m very grateful for my community, and honestly wouldn’t change a thing about them. I just have a lot of fun engaging with them; they make the streaming aspect so much fun.

You’re currently 14 years old. That’s quite a bit younger than most chess streamers! How do you think it’s different streaming as a 14-year-old vs. streaming as someone who’s older?

One thing about being 14 is that I grab a lot of the younger audience. I feel like I have a lot of friends my age who just encouraged me to start streaming, and they’ve been supporting me for a long time. So lots of people around my age or even younger are watching.

Most of Levy or Hikaru’s audience can be a bit older; being part of the younger generation does help me attract more people my age to the stream. My community has lots of young, strong chess players, which I really enjoy. But I do feel like I have balanced support from a lot of different age groups and people!

What’s the most memorable or exciting moment you’ve had on stream so far?

When I started streaming, I made myself a goal: while I was building my community, I wanted to get raided by Hikaru. I remember it very vividly, it happened probably about five months into streaming. I think I’d just finished an Arena Kings stream and I remember being in an intense blitz game and not even looking at the chat, but just trying my best to win.

When I finished the game, I glanced over and realized I was being raided by Hikaru! I remember pinching myself just to make sure I wasn’t dreaming. That was definitely one of the most exciting moments so far.

… I was being raided by Hikaru! I remember pinching myself just to make sure I wasn’t dreaming.

What’s the craziest bet or challenge you’ve received while streaming?

Nothing tops a bet by a user called Aksinha24, who you might know if you watch GothamChess. He came to my stream and offered 100 subs every time I completed one of his chess challenges; he’d be like ”Okay, win a game without a queen and a knight” and I’d try it. That went on for quite a long time! At the end of the day he gifted around 300 subs! That was quite something. It was a very exciting day of streaming and has to be the craziest bet or challenge I’ve gotten, for sure.

Your channel is constantly growing. Can you tell us a bit about the future of your stream? Do you have any milestones you’re aiming for, or fun plans/ideas?

With streaming, I’ve always been a big believer in not focusing on the numbers too much in the beginning. But now that my stream has gotten a bit bigger, I find that I have to focus on the numbers to motivate myself to go forward!

A big milestone for me is definitely 10,000 followers. It’s a goal I’ve had in the back of my mind. In terms of streaming in general, I’m basically just trying to build my community. Recently I’ve been on the rating grind and hit 2700 in Blitz. My aim is just to keep improving, create a positive environment, and make it fun for everyone to watch the stream. Numbers come and go, but if you continue to build and focus on that, I feel like at some point the numbers will follow.

By the way, congrats on qualifying for the Chess.com Global Championship! I think you were actually one of the first streamers who qualified. How did your games go?

So if I’m not mistaken, I was indeed the first streamer to qualify! I ended up qualifying in the second qualifier; the first time I came very close. That was kind of exciting… if I was THAT close to qualifying the first time, then I definitely had to try again.

I started the second attempt and was doing pretty well: I was on 7/7 points, and yet I had some very stressful games at the end! The viewership and level of support was insane, a lot of people were rooting for me and cheering me on. It was a great experience and I was very happy when I qualified. It was fun for me as well as the viewers! I think the next phase will be considerably harder, but it should be a lot of fun. I’m definitely looking forward to that.

Imagine you could do a chess-based collab on your stream with anyone in the world. Who would it be, and why?

That’s a hard question! Something I’ve always loved watching and wished I could do is chess commentary. I always watch Chess.com streams, it doesn’t really matter what the event is. As a result, I’ve watched a lot of commentary over the years.

I would really just love to do commentary with Hikaru, or as part of a Chess.com broadcast. But obviously, I’m just too young to legally work! Maybe in a few years that could be an option.

I don’t think I necessarily have one person in mind that I’d love to collaborate with, but it could be any one of those three streamers I mentioned earlier (Hikaru, GothamChess, Daniel Naroditsky). I’d love the chance to do some commentary with them.

We haven’t mentioned one important thing about online chess: the memes. What’s your favorite chess meme?

So some of my favorites are actually in this article! LulaRobs also has some great memes on here Twitter, she’s really good at those. It takes so much creativity to make them! 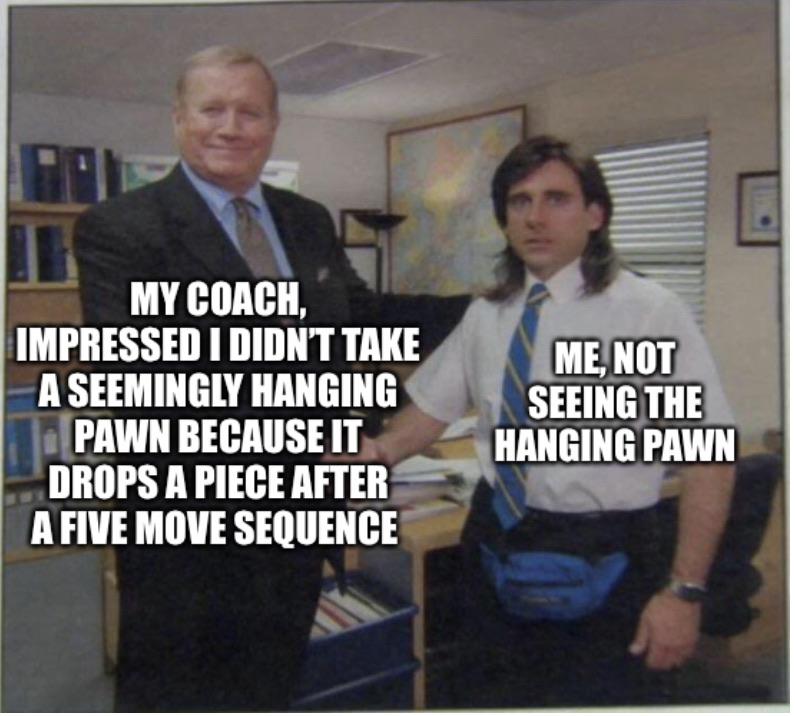 Your Twitter profile says: ”I’m here to make an impact on the world. Aside from that, chess expert, professional streamer.” What impact would you like to make?

I think just being a good person is important. If you think about it, streaming, in general, is very dependent not necessarily on you, but on the community and the support and love you get from them.

Streaming has made me understand that I have to do my part as well. I wouldn’t be here if it wasn’t for my community and the people who supported me along the way. I realize that at 14 years old, it’s hard to make an impact on the entire world, but I can do my part. Just being kind, helping others, and being positive in general can go a long way. You have to put others first sometimes.

Somebody from my community was going through a rough period of his life, and he told me he’d just recently found my stream and felt welcome and recharged by the community and all the positivity going around. A few days ago he just got a new job and everything is going back to normal for him, and I’m really grateful to have a community that can make a positive difference for people. I’m glad I can help people out in some way.

I realize that at 14 years old, it’s hard to make an impact on the entire world, but I can do my part.

And finally: what advice would you give to aspiring chess streamers? What are some of the lessons you’ve learned?

1) Don’t overthink it. If you want to stream, just start! It takes courage; not everybody feels comfortable speaking to an audience, but if you have that desire, just go for it. Don’t allow yourself to be afraid of it; I feel like I definitely had to overcome that in the beginning.

2) Be very consistent. I feel like that’s one of the most important things. When I started, I streamed every day for around a month. Your viewers want to watch a streamer who streams! Having that consistency is key, whether you’re starting out or if you’re someone like Hikaru.

3) Focus on having a positive environment. At the start, I had a lot of trolls, and a lot of negativity and mean people in general. You have to set the tone and not encourage it. If someone is mean or annoying, ban them, and others are less likely to do the same thing. I’ve had one or two mods from the beginning who understood this and have helped keep a nice environment to this day!

Catch ChessBrainiac live on his Twitch channel. Is there anyone you’d like to see as the next Streamer of the Month? Let us know in the comments below!

Previous Streamer of the Month winners: