Virtual reality in rugby – the future of sports psychology?

“Virtual reality is in its infancy in sport,” he says Mickaël Campo, an associate professor of sports psychology at the University of Burgundy who works for the Fédération Française de Rugby (FFR) across their national teams. His world is split between research and applied techniques with elite athletes. And in rugby, he sees an opportunity.

“Mental training has to go beyond traditional approaches,” he begins. “I got funding for the Olympic Games – a research grant for a team sports project that uses social identity and team dynamics as the key. A big factor to optimize performance in team sports.

“So for this project I work with FFR, but also with the soccer federation, handball, volleyball and the federation of basketball. The five main federations. We have many work packages and studies that investigate social identity and one of these studies is our work and we induce social identity viability.

This is where virtual reality comes in.

According to Campo, they have developed a virtual environment where an athlete can see (from a first-person perspective) around the Stade de France. The program can be manipulated to see things from a team, or individual, perspective.

So they witness a scenario with team-mates in one colour, an opposition team in another set of colours. You see team names, hear the national anthem, and you see a scene after a try is scored played out on the big screen. Then team-mates come up to you to celebrate, make a huddle and more. That’s one setting.

Or you can focus on the ‘I’ and there is a graying out of colours, no integration of opposition. It’s all on you, while the other setting hopes to promote social identity and the sense of ‘we’.

So where are we in this process, between testing and roll-out?

Campo says: “We have been testing on professional players in France. We see that there is an expected effect on social identification. So when the players used this tool, they felt more identified with the team. And when they use this tool with the personal parameters, they feel it not at the personal level, but they identify less with the team.

“So now we want to add another level to the feedback, you know? When the guys are in a huddle and there is a social interaction, we want the participants to have proprioceptive feedback – if there is a pat on the shoulder (in the virtual environment), they could feel a vibration – to make it feel more real .

“And after we have developed this for all the sports, in parallel, we can create a training program to use this variation and develop some regulation strategy.” 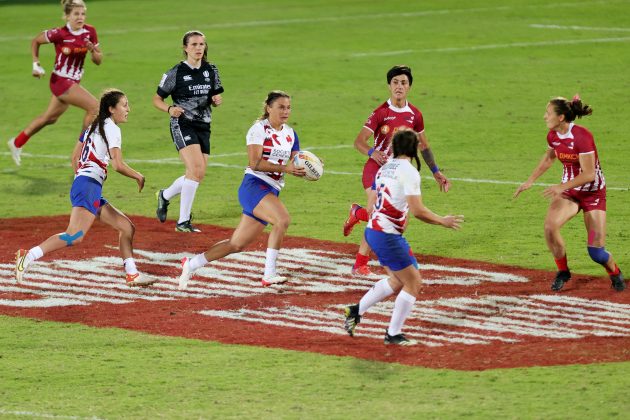 Campo points out that a virtual system like this is the closest you can feel to an actual game as you search for associated emotions and interactions. Having worked as a trainer, he sees the difficulty of replicating a match on the training paddock, from a psychological viewpoint too.

If everything works out as is hoped, Campo can see it benefitting rugby athletes on several levels. He gives the example of sevens players who may not be used to packed stadiums. If they react well to virtual training, perhaps they will not be overwhelmed or distracted.

He also talks of the ‘I’ and ‘we’, giving the example of a missed tackle leading to a try – we don’t want an individual to sink into a debilitating sense of guilt or to totally internalise what happened, nor do we want a team-mate to direct anger and blame directly at one team-mate and allow that to fester.

“What we want is to train players with different situations in a virtual environment, with different emotions provoked by the social identification, and with this to develop some adaptations or regulation strategies.”

Campo says they are not the first researchers to explore virtual reality, but adds: “We are the first to use virtual reality to help cope with social identity and the effect of team identification on my emotions and performance.”

Could this be the future of sports psychology? Either way, it looks like another front French rugby are keen to lead on.

Download the digital edition of Rugby World straight to your tablet or subscribe to the print edition to get the magazine delivered to your door.