DIO‘s classic debut album, 1983’s “Holy Diver”was reissued last month as “Holy Diver: Super Deluxe Edition” via Rhino. The four-CD boxed set comes with two versions of “Holy Diver”. The first is a new mix of the album made by Joe Barresi (TWO BEERS, QUEENS OF THE STONE AGE, SLIP KNOT). He used the original analog tapes to remix all nine tracks on the album. The second is a newly remastered version of the original 1983 mix. The Super Deluxe Edition also features unreleased live performances and outtakes, along with a selection of rarities from the era.

Original DIO guitarist Vivian Campbell discussed the decision to remix “Holy Diver” during an appearance on this past Wednesday’s (August 3) episode of SiriusXM’s “Trunk Nation With Eddie Trunk”. Asked if he has heard the new version of “Holy Diver” and what he thought about it, Vivian said (as transcribed by BLABBERMOUTH.NET): “I have not. And I find it a little bit unsettling that I ended up being talked into doing an interview a couple of months ago about it, not having heard the record. And I’ve gotta say I haven’t heard good reports. [Laughs] That was a little weird. I just spoke to some journalist at length about this, but I haven’t actually even heard the product.”

He added: “I’ve heard that they’ve put out outtakes of tracks from ‘Holy Diver’ and solos that didn’t make the cut. And I’m wondering why… There’s a reason why stuff didn’t make a record in the first place. It doesn’t make a lot of sense to me to be putting it out there.”

Original DIO drummer Vinny Appice admitted two “The Rock Is George” podcast that it was “risky” remixing “Holy Diver” nearly 40 years after the LP’s original release. “When you mess with something that is a classic, you’re taking a chance that, is this gonna be better or is this gonna be different?” he said. “The remastered [version of the album], I heard some of that, and that sounds pretty good. I heard a little bit of the remix… I’m almost afraid to listen to it because the sounds on there sound great — the drums sound great. And I think it might sound a little bit drier, maybe a slightly different sound to the album.

“You’re used to hearing an album like ‘Led Zeppelin I’,” he continued. “There’s a sound to that record. And the drums are recorded great on that; [Jimmy] Page‘s guitars and the mix — fantastic. The mix is incredible on those albums — all the ZEPPELIN albums. So when you’re gonna take up that task of trying to remix something like that, that’s risky. I think even Joe was nervous about touching this classic thing. And the problem with the remix, too, is when we mixed that album, there weren’t really any computers in the studio. There was outboard gear brought in. There was some red thing we had — I forgot what it was called — we put on the drums, an EMT thing. And that was on, and it gave the drums some ambience. And so everything was alive. So when we mixed it, it was Ronnie [James Dio, vocals], Angelo [Arcuri, engineer]me or We V [guitarist Vivian Campbell] or whoever was in the studio. We went over how we’re mixing this. ‘Okay, you pull those faders down a little bit when this part comes up.’ ‘Angelo, you put the guitar solo up.’ ‘Ronnie, you do the keyboard’ — whatever was in there. So we mixed it like that. We didn’t put it on an auto-mix and the computer remembered the mix and then you can just keep mixing to that. That was the way we mixed it. So even Joe mentioned that he couldn’t really get some of the… Like that EMT, they don’t use it anymore. [They have] plug-ins now, but it still sounds different. So that’s the way we mixed it, and now you bring it up to the new technology and things are done differently. So he had quite a task ahead of him. I mean, it sounds good, but if you’re used to the other sound, it sounds a little different.”

Two months ago, Ronnie‘s wife and longtime manager Wendy Dio customs duty Rob Rush Radio about the reasoning behind “Holy Diver: Super Deluxe Edition”: “We were just — Rhino and myself — were thinking that it would be nice to re-release it with a newly remixed version. And I went through lots of different producers and thinking who would make a good job of it for Ronnie and bring it a bit more modern. So we picked Joe Barresiwho’s done lots of stuff with TWO BEERS spirit QUEENS OF THE STONE AGE and so on. And he was quite reluctant in the beginning to do it because he said, ‘Oh, I can’t improve on what Ronnie there.’ And I said, ‘Well, it’s not really to improve on it. It’s just to make it a little bit different and to bring it up to today’s standards.’ And so he did it, and I’m very pleased. I think he did an absolutely amazing job with it. Spirit [next month] being Ronnie‘s 80th birthday, we wanted to bring something out to celebrate it. So it’s a two-LP set and there’s a vinyl with it and lots of outtakes that nobody’s ever heard of before. We went into the vault and found lots of outtakes, and Joe said, ‘What about these?’ And you said, ‘Fine. Let’s do that too.’ And there’s also, on the deluxe version, a show that Wynn Davisa longtime engineer and friend of Ronnie‘s, he remastered that one. And so that one’s coming out as well on there. It was done in 1983 on the ‘Holy Diver’ tour at the Selland Arena in Fresno. So he mixed it — it was a concert, a live recording, so he mixed it. And that’s on there as well. It’s gonna be a wonderful deluxe version and a super celebration of Ronnie‘s life.”

Barresi‘s new mix of the “Holy Diver” title track is available digitally as a preview to the new album mix. Check it out below.

In addition, Barresi‘s new mix of “Holy Diver” was released the same day as a two-LP set on 180-gram vinyl ($34.98). It includes the original nine tracks, plus the 1983 B-side version of “Evil Eyes” as a bonus track. Side four is decorated with an etching of the legendary demon Murry that graces the album’s iconic cover. The vinyl is kept in a gatefold sleeve that shows off newly commissioned artwork by longtime DIO artist Marc Sasso. The same artwork is also used for the four-CD Super Deluxe Edition.

Critically acclaimed and a commercial success, “Holy Diver” contributed two timeless classics to the heavy metal canon — “Rainbow In The Dark” and its title track. The album also ranks No. 16 Wed Rolling Stone‘s current list of “100 Greatest Metal Albums Of All Time.”

In the illustrated liner notes that accompany the Super Deluxe Edition, music journalist Mick Wall shares the album’s creation story, including the making of its crown jewel, “Rainbow In The Dark”.

He writes: “Lyrically, it was Ronnie James Dio at his poetic best… Musically, ‘Rainbow In The Dark’ was also the band’s first truly collaborative endeavour. The inspiration for the monster guitar riff came from something We V had written when he was 16. Vinny added his distinctive battle-cry beat, and Jimmy added the final touch with the infectiously simple keyboard motif.” The song was finished in 10 minutes, he adds.

“Holy Diver: Super Deluxe Edition” goes beyond the original album with a previously unreleased recording of the quartet performing live in 1983 at Selland Arena in Fresno, California during the “Holy Diver” tour. Wynn Davis mixed the concert recording, which spotlights live versions of songs from “Holy Diver” (“Stand Up And Shout” spirit “Rainbow In The Dark”),RAINBOW classics (“Man On The Silver Mountain” spirit “Starstruck”),spirit SABBATH staples (“Children Of The Sea” spirit “Heaven And Hell”).

The Super Deluxe Edition also revisits the “Holy Diver” recording sessions to uncover unreleased outtakes for several album cuts, including unheard takes for “Invisible”, “Straight Through The Heart” and a version of “Rainbow In The Dark” that boasts an alternative guitar solo. There’s also an early version of “Evil Eyes”a song that would resurface on DIO‘s 1984 follow-up album, “The Last In Line”. A selection of rarities rounds out the new collection with mono and stereo 7″ single edits for “Rainbow In The Dark” and a version of “Evil Eyes” that was released in 1983 as the B-side two “Holy Diver”.

01. Don’t Talk To Strangers
02. Straight Through The Heart
03. Invisible 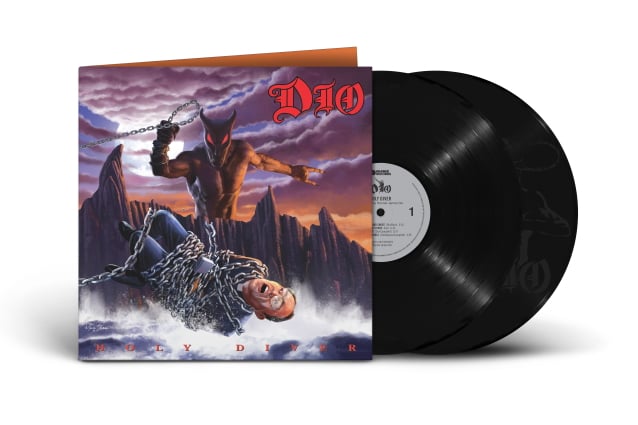