“I started working part time at the Kids are TOPS Sports Center,” LaPeer said of the Centerville gym. “Eventually I moved into a full-time role there.”

That was 25 years ago, and today, LaPeer, who has no biological children of her own, is the general manager and inspires her gymnastic “kids” to make their dreams come true.

This includes not only encouraging, teaching and mentoring but also standing by them when injuries happen. LaPeer visits her students in the hospital prior to surgeries or any other procedures, often giving them a lucky charm beforehand to help them keep a positive attitude.

Melissa LaPeer has earned the love of her student gymnasts and their families through her positive attitude. CONTRIBUTED

Melissa LaPeer has earned the love of her student gymnasts and their families through her positive attitude. CONTRIBUTED

The students did the same for LaPeer when her life changed in 2019.

“I got my mammogram and they (medical personnel) thought they saw something,” LaPeer said. “They ordered a biopsy, and everything came back fine.”

LaPeer breathed a huge sigh of relief when doctors said she had “dense” breast tissue and there was nothing to worry about. At the time she was supporting a close friend who was going through a similar process and had just been diagnosed with breast cancer.

“My friend, Jen, was diagnosed and right after that I felt a small lump,” LaPeer said. “I had another ultrasound and a second mammogram earlier this year.”

LaPeer’s ultrasound didn’t show anything concerning so a needle biopsy was ordered. A follow up was scheduled right away. Since her biopsy results were visible the next day online, LaPeer was shocked when she saw the words “ductal carcinoma.”

“Being able to see the results is both good and bad,” LaPeer said. “I knew what carcinoma meant. In my mind, that’s cancer.”

Throughout her time working with so many families at the gym, LaPeer ended up meeting a few medical professionals, including an oncology surgeon. She reached out right away and asked him to review her results.

“He confirmed that it was cancer,” LaPeer said. “I was referred to an oncology surgeon, so it was good I already knew one.”

LaPeer’s cancer journey began once she heard those words. Although she didn’t know the stage, she felt confident that it had been caught early. Here biomarker testing would determine if she would need chemotherapy and radiation.

Melissa LaPeer in recovery after her double mastectomy on March 7. In her left hand she holds a character from “The Smurfs” – a good luck charm she always sent to her students when they were injured and facing surgery. CONTRIBUTED 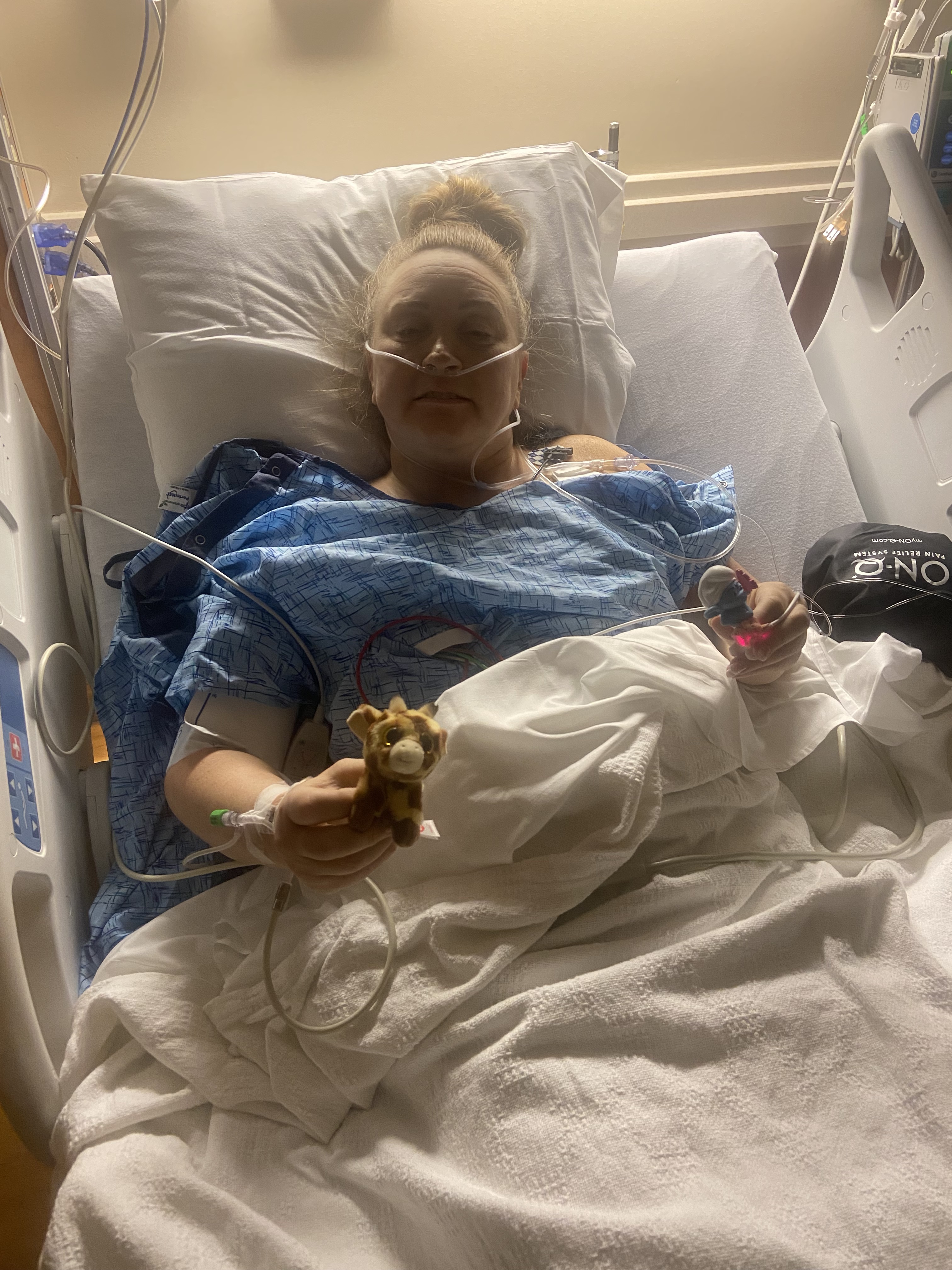 Melissa LaPeer in recovery after her double mastectomy on March 7. In her left hand she holds a character from “The Smurfs” – a good luck charm she always sent to her students when they were injured and facing surgery. CONTRIBUTED

“I did get the genetic testing and I was not positive,” LaPeer said. “This was good news because if I were positive, I would have been at higher risk for uterine cancer too.”

LaPeer’s friend Jen ended up having a double mastectomy after being diagnosed with breast cancer.

“I always said that since watching what Jen went through, I would have both breasts removed at the same time,” LaPeer said. “I didn’t want to go through the process twice.”

On March 7, LaPeer had a double mastectomy. Post-surgery testing showed that her cancer was indeed in the early stages. Because her surgeon determined all her cancer was removed, she did not have to undergo chemo or radiation treatments. Instead, she takes oral chemotherapy and will do so for five years.

As soon as her students and their families heard about LaPeer’s cancer, they rallied around her and offered their support, throwing a huge party at the gym prior to surgery and visiting her in the hospital. Her students even sent along the same lucky charm – a little blue character from “The Smurfs” – that LaPeer sent to them whenever they needed it.

“I missed four days of work and the kids were absolutely fantastic,” LaPeer said. “They really made the entire process easier for me.”

LaPeer decided up front to be honest with her gymnasts and their families and answer any questions they had about her cancer and the surgery. And today, she has completely recovered, having undergone her first reconstruction surgery this summer.

“It was amazing how this gave me a place to talk all about it,” LaPeer said. “I wish everyone could be around a group of kids when going through something like this. The kids and their families have been my biggest blessing.”