The 14th-seeded young Uzbekistan team with an average age of 20 prevailed over the overnight leader, 12th-seeded Armenia, by a strong 3-1 score to jump into sole lead with 16 match points at the end of the ninth round of the 44th FIDE Chess Olympiad. The 11th-seeded India 2 held sixth-seeded Azerbaijan to a 2-2 draw to share the second spot with Armenia on 15 match points. The top two seeds, US and India, are in a tie with others for fourth-tenth places with 14 match points each.

In the FIDE Women’s Chess Olympiad, fourth-seeded Poland defeated top-seeded India by a 2.5-1.5 score to join them in a four-way shared lead with 15 match points. Third-seeded Georgia held second-seeded Ukraine 2-2 to join the leaders with 10th-seeded Kazakhstan who defeated 15th-seeded Bulgaria by a 3-1 score. Indonesia, Armenia, Ukraine, Germany, and Azerbaijan are tied for the fifth-ninth places with 14 match points each.

Olympiads are invariably characterized by the scramble to the top of the points table in the final stretch of the competition, almost undeterred by early leads and initial performances. Thus, as the tournament entered the final three rounds, the chess lovers of Chennai were delighted to be served with high-voltage clashes on Sunday.

Tournament leader Armenia’s clash with the Uzbekistan team was well-fought on all boards, and the bottom tables proved to be the clincher for the latter. Sindarov prevailed over GM Samvel Ter-Sahakyan with a sacrificial attack in a well-conducted game:

In contrast, GM Robert Hovhannisyan vs. Vakhidov was a long, protracted struggle. The young Uzbek prevailed in a complicated endgame:

Although India 2 has done much better than their initial seeding in the tournament so far, it was never going to be easy for them to face a higher-seeded team. The top board game between GM Dommaraju Gukesh and GM Shakhriyar Mamedyarov never seemed to cross the equal mark, but the GM Rauf Mamedov vs. GM Nihal Sarin’s encounter was more uneven:

Then it was left to GM Praggnanandhaa Rameshbabu to score the equalizer for India 2 in a cliff-hanger of a struggle against GM Vasif Durarbayli. It is analyzed as our game of the day:

After an upset loss against Israel in the fourth round, the seventh-seeded Netherlands has steadily come back into the tournament scoring wins in all the rounds except for a draw against France in the seventh round. It was expected that the Dutch would push for a podium finish in the final stretch for a much-needed victory against 13th-seeded Iran in this round.

Iran has had an uneven event, as they were held by the 44th-seeded Canada in the fourth round and beaten by the top-seeded US in the sixth round. They came back into the tournament with a much-needed win against the 15th-seeded France in the eighth round. It was expected that the Iranians would also try for a win in the crucial ninth round. And it looked very much possible at one point.

After the bottom-table games—GM Benjamin Bok vs. GM Pouya Idani and Max Warmerdam vs. IM Seyed Khalil Mousavi—ended draws, the other two boards looked equal for a long time. Although GM Anish Giri sacrificed an exchange against GM Parham Maghsoodloo in the endgame, he could not progress in the resulting locked endgame:

Thus, it was left for the cliff-hanger game between GM Amin Tabatabaei and GM Jorden van Foreest where the Iranian made an interesting exchange sacrifice in the opening, an invention of GM Vladimir Kramnik. Further, Tabatabaei even tortured his opponent in that familiar nightmare of a chess player—rook and bishop vs. rook endgame, but van Foreest defended steadily to force a draw:

Another interesting clash of the day was between the top-seeded US and 25th-seeded Greece. On the top table, after his uneven performance in the tournament so far, GM Fabiano Caruana showed his aggressive intentions by adopting the sharp Sveshnikov variation of the Sicilian Defense and scored an impressive victory:

But on the second board, GM Levon Aronian mishandled a promising position and lost to GM Nikolas Theodorou:

Finally, in an advantageous rook ending, GM Wesley So pressured his opponent to give the US a winning advantage:

Ireland’s Murphy continues to impress and defeated his fourth grandmaster opponent for a score of 7.5/8 in the tournament: 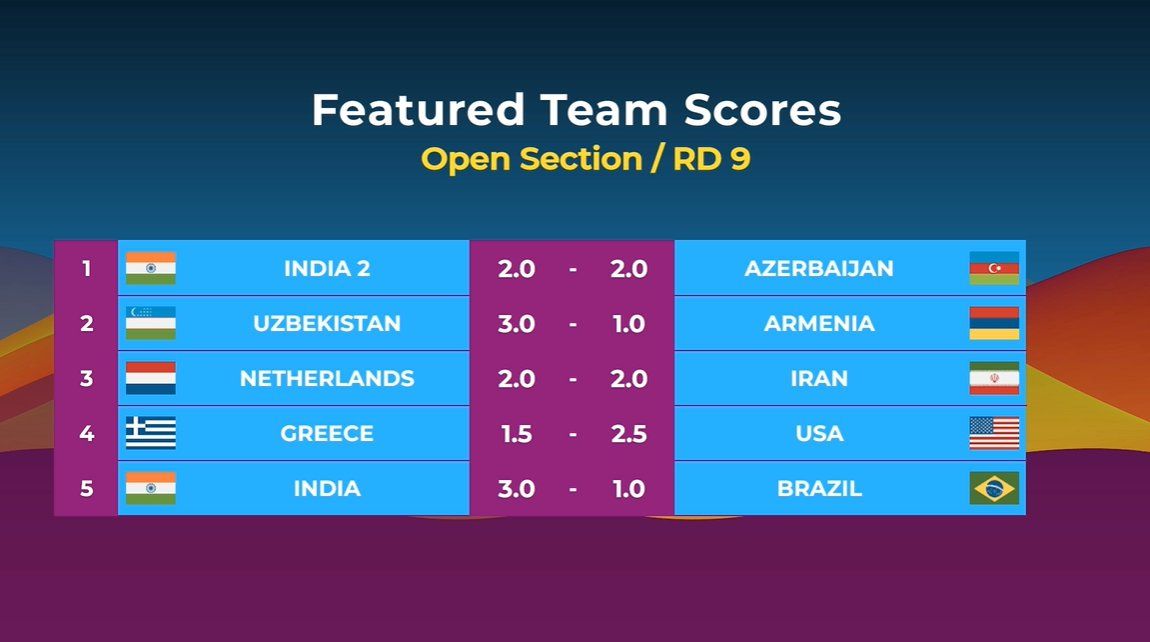 In the top-table encounter between erstwhile leader India and Poland, GM Harika Dronavalli seemed to build up a clear advantage against GM Monika Socko:

The match turned in Poland’s favor when in-form Kiolbasa prevailed over Vaishali in a drawish ending when the latter tried to overpress:

On the second table, in a battle of heavyweights on the top board, former world women’s champion GM Mariya Muzychuk missed an opportunity to gain a significant advantage against GM Nana Dzagnidze:

In another all-GM encounter on the second board, GM Nino Batsiashvili defeated GM Anna Muzychuk in a tactical encounter:

On the fourth board, IM Nataliya Buksa equalized the scores for Ukraine by defeating IM Meri Arabidze in a kingside attack: 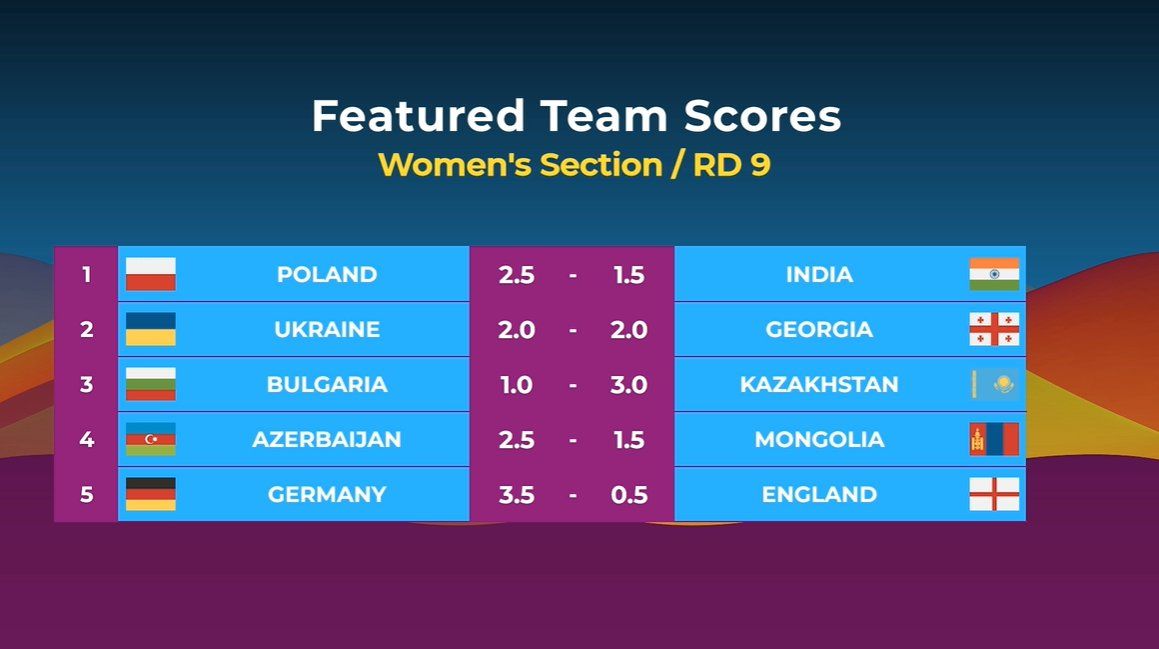