Ireland internationals Enya Breen and Katie O’Dwyer have both paid tribute to their former teammate Sene Naoupu, who announced her retirement from Test rugby yesterday.

The 38-year-old confirmed the end of her international career, having won 48 caps for Ireland since her debut in 2015, while also featuring for Ireland Sevens.

It had been thought the New Zealand native’s international career was over when she was left out of the Ireland squad for the opening rounds of this year’s Six Nations, before returning for the final two games against England and Scotland.

Breen, who started alongside Naoupu in the center for both games, says her former teammate has made an enormous contribution to the game in Ireland.

“Sene was massive to my development,” she said from Ireland’s team base in Hamamatsu, ahead of their opening Test against Japan on Saturday (11am Irish time).

“I came in as a young center and she mentored me in that capacity. I probably wouldn’t be where I am today without some of her guidance and some of her tips that I’ve gotten from her.

“I wish her all the best in the future. She’s been great, and her contribution to Irish rugby can’t be understated.”

Naoupu moved to Ireland from New Zealand in 2009 with her husband and former Connacht back row George, before qualifying for Ireland through residency and making her debut in the 2015 Six Nations.

The center was named Rugby Writers of Ireland Women’s Player of the Year in 2016, and scored six tries in her 48 caps.

“She’s been a huge part in all of our journeys, whether at club level, interprovincial or Ireland,” her Leinster teammate Katie O’Dwyer added.

“She will always be the first person to put the arm around you and give you a dig out when you need it. I know the off-pitch stuff for her, she’s pushed hard to change the game. I think us as a squad, we wish her all the best.

“No doubt she’ll have a huge influence on the game down the line and for years to come. Just a big thank you and best wishes to her in the future.”

“Obviously, there’s plenty of new faces on the team and in the backroom staff, but everybody’s fitted in pretty seamlessly, they’ve fitted in pretty much right around the foundations that we started to develop during the Six Nations, and they fully bought into what we’re trying to do here.”

Ireland are currently preparing for a two-Test series against Japan, the first of which is this Saturday in Shizuoka.

After arriving in their Hamamatsu base on Friday, the squad ramped up preparations for the first Test in recent days.

“We got down to work yesterday, kind of setting the plan for the week and setting the tone, getting used to the heat as well,” Breen (blow) added.

“And today was another tough day at the office. We had a big session, full of contact. I think it felt something like 42 degrees today with the humidity up at around 80%. Getting used to that has been tough, but it’s been hugely exciting and great to finally be here, settled in and preparing for the weekend.” 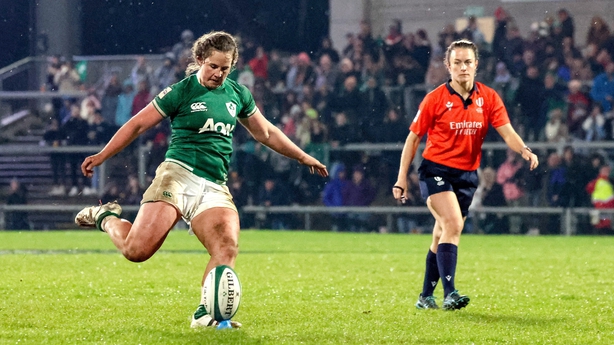 With a host of injuries, as well as the unavailability of some Sevens players, Ireland’s squad is much-changed from the Six Nations campaign, with eight uncapped players in the squad named by Greg McWilliams earlier this summer.

And Breen, who scored the match-winning try and conversion in Ireland’s final Six Nations game against Scotland in April, says they’re desperate to get out on the pitch and build on their recent campaign.

“It’s been a big focus of the week. Obviously, there’s plenty of new faces on the team and in the backroom staff, but everybody’s fitted in pretty seamlessly, they’ve fitted in pretty much right around the foundations that we started to develop during the Six Nations, and they fully bought into what we’re trying to do here.

“I don’t think anybody’s standing out as not hitting the mark, everyone’s here because they deserve to be. It’s great to see some new young fresh faces and to see what the pathways are bringing through at the moment. It’ll be exciting to see what they do at the weekend.

“I’m buzzing to get going now, to be honest. It’s been a long few months break. I’m feeling really good. It’s a massive few weeks for Irish women’s rugby, first-ever summer tour and to be part of that is pretty special. Buzzing to get going and show what this young new group can do,” the Munster center added.