There’s a little pressure that goes with winning streaks and the Missoula Sentinel’s football team has a long one — 25 games and counting, after a 38-31 victory Friday night.

Glacier High added some pressure of its own.

The host Wolfpack pushed the Spartans all the way back to their 4-yard line Friday at Legends Stadium, before a final Gage Sliter pass — as the clock ticked to 0:00 — fell to Karsen Beitz for his second interception of the game.

Sentinel held on in an early Western AA showdown.

“The way the game ends up — I’m so proud of our football team,” said Wolfpack coach Grady Bennett, whose club quickly took a 14-0 lead, and just as suddenly trailed 28-14 at Legends Stadium. “To battle back like that, stay in it, and push them right to the very end, I’m proud of them.

It was a wild game, starting with Glacier scoring on its first two possessions. Alex Hausmann high-pointed a nice throw from Sliter for a 16-yard touchdown pass to start things. On the Pack’s next possession Sliter hit Jackson Hensley for 35 yards, then handed off to the senior running back for a 5-yard scoring run.

The game wasn’t eight minutes old and Sentinel was down two scores. But then the Spartans scored 42 seconds after Hensley’s TD: Adam Jones took a direct snap in the Wildcat formation and scored from 57 yards out.

Jones scored on a 33-yard run before the quarter was over, and then his backfield mate Kellen Curtiss added scoring runs of 35 and 9 yards in the second quarter.

Sentinel stayed ahead, but with players (including Jones) cramping and yards getting tougher, the Spartans couldn’t put the Pack away.

“I thought we had a chance to stretch it and had some untimely penalties,” Sentinel coach Dane Oliver said. “We were wounded there; that’s what three days of indoor smoke practice will do. We had cramps and the volume is hard to simulate.

“But I don’t know — to come up here and beat a great program like Glacier’s, that’s a heck of a night. I haven’t felt like this in a while. We’ve had a lot of games that haven’t been this tight.”

Sentinel had a long stretch of near-perfect football. Jones, who ran for 163 yards and added 96 yards in receptions, helped.

“He’s a cheat code right now,” Oliver said. “We’re down 14-zero and he might have single-handedly brought us back. I mean, you saw it. And he played a ton of snaps on defense tonight. Heck of a football player.”

Meanwhile Sliter’s hot start gave way to a stretch of eighth straight incompletions, with two interceptions. He had another drive end on downs at Sentinel’s 34, and then — after Curtiss’ second TD — a third interception after the Pack reached the Spartans’ 31.

“I told him at halftime, ‘Hey, I had several three-interception first halves. You’ve just got to get your mind back in it and play well the second half,’ ” Bennett said.

“And he did that. I’m just really proud of how our kids battled, and especially defensively. It got away from us a little bit in the first half, but they really buckled down and played a solid second half.”

Sliter, who threw for 143 yards after halftime, hit Cohen Kastelitz with a 31-yard strike in the third quarter, setting up a 15-yard TD run from Kash Goicoechea.

Jones answered for Sentinel, first with a second-effort, 32-yard run out of the Wildcat, then a leaping catch of a 22-yard Riley Allen scoring pass to make it 35-21.

But the Wolfpack kept circling: Sliter converted a fourth-and-21 with a scrambling throw to Kaid Buls for a 34-yard gain; Kobe Dorcheus had a 2-yard scoring run on the next play.

The Pack, burning its last two time outs, forced a punt and took over at its 46 with 1:33 remaining. Glacier got off 11 snaps, using sideline throws and a 10-yard, fourth-down Sliter scramble to get to the 4-yard line.

Two throws into the end zone failed, although Hensley almost hauled in one that Bietz dove at and barely missed. Beitz made his game-clinching pick on the next snap.

“That’s a young football team that’s just learning how to compete,” Bennett said. “We had a lot of guys that struggled at moments that were big in a game like this. But they’ll learn from it.

“And we competed way better in the second half. Shoot, this is a team that’s just going to get better and better and I’m excited about where we’re going to end up — because that’s what matters.” 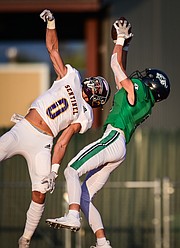