It was, in many ways, emblematic of the much larger pool community that has come so far while continuing to have a long way to go. Exhibition and/or Challenge matches happen all the time, but on Saturday, Sept. 10, two professionals squared off in a somewhat isolated venue in Wilmington, NC and played a double-hill exhibition match that was everything, as a spectator, one could hope for; ups and downs, lead changes and at the end of a race-to-17, a single game to determine the winner.

The event was organized by pro-player Justin Martin, who grew up and currently lives in Wilmington and for the past 15 months, has run the JUMP Billiards Pro Shop at Breaktime Billiards in the city. In coordination with the room’s owners, Jim and Margaret Grago, they transformed a restaurant space within the facility into a 60-seat arena, dismantled and re-assembled one of the room’s nine, 9-ft. tables and invited world-class pro player, Roland Garcia from the Philippines to be Martin’s opponent in the Exhibition match. Garcia is currently the #1-ranked competitor in the Predator Pro Billiard series.

“We’re good friends,” Martin explained, as he worked with a cue on a lathe in the Pro shop a few hours before the match. “We see each other out and about at the tournaments a lot and he’s definitely one of the few guys that I like to hang out with, spend time with out at the events.”

Garcia, sitting a few feet away, is asked whether he intends to emerge victorious in the upcoming match. Having arrived only a few hours before and still dealing with a bit of travel fatigue, Garcia yawned. And then suggested that it would be Martin who would be doing the butt-kicking in the near future. As the lathe continued to turn and Martin kept his eyes focused on the task at hand, he was asked what prompted the decision to organize the match.

“I don’t gamble,” he said, “and I’m always looking for new ways to compete, to find new ways to stay sharp, so I always felt like exhibition pool is a good answer.” 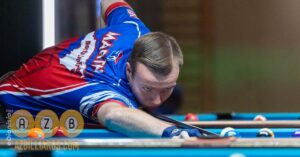 In addition to the exhibition match itself, they arranged for a VIP after-party at which spectators who had paid to sit at four VIP high-top tables and chairs, positioned a few feet away from one of the pool table’s long rails, would hang out after the match, play some pool and socialize. All things considered, the match, the VIP Party, and expectations of attendance went smoothly and met expectations. The crowd hovered throughout the match between 40 and 45 attendees, most of them with some form of personal relationship with Martin.

“I think you’d have been hard-pressed to find someone in the crowd who didn’t know me personally,” said Martin.

“Justin’s girlfriend (Katie Cool) is on our pool team here in Wilmington,” said Mike Tackett, seated at one of a number of folding tables and chairs on the opposite side of the table from the VIP area. “I take lessons from him, too; once a week for about the last month and a half.”

Grago and his wife, Margaret have owned Breaktime Billiards since November, 2015 and hosted their first exhibition match, fan-participation event about four months later, when Earl Strickland and Rodney Morris were the competitors. Although the room has since hosted tournaments at which personalities like Dr. Cue (Tom Rossman) and Venom (Florian Kohler) have been in attendance, this was the first such exhibition match since 2016. While personal-awareness-of- Justin-Martin was an important factor in drawing a crowd to Breaktime Billiards, Grago was also aware of the high-profile status of Garcia as a known, world-class competitor.

“So yeah, it was people coming because they know Justin and knowing that Roland was one of the top players in the world,” he said. “They saw our (FB) posts about the match, Garcia’s and Justin’s, too.”

Attendance got another boost because on the same day, the cities of Jacksonville, Morehead and Havelock, without a facility in their area to accommodate them, played their regional APA playoffs (known as the Tri-Cups) in the building; before, during and after the exhibition match. While at any given moment during the match, there were generally about 40-45 of the arena’s 60-seat capacity watching it, an estimated 10-15 of those were individuals who slipped into the room to watch briefly before heading out to compete in the area of ​​the venue hosting the Tri-Cups. Had that transient part of the crowd all arrived at the same time, it would have exceeded the arena’s capacity, so in a word, sold-out.

Martin and the Gragos were happy with the result, Martin commenting the next day that they were “very happy” and that plans were moving forward “to do a lot more things, going into next year,” to include the creation of even more seating space and an upgraded streaming platform. Nothing, Martin added, really surprised him about the execution of this first-ever event at his hometown room and pointed to the involvement and commitment of the Gragos in the process to its overall success.

“They were integrally involved in being part of it,” he said. “They didn’t necessarily have tons of experience with this sort of thing, and neither did I, but everyone worked hard to make sure that everyone was satisfied, and we hope to be able to continue to do so in the future.”

And then, there was the 10-ball match. It got underway right at the time that Garcia had a meal delivered to the table where he sat with his manager during the match. His first few games were executed while he tended to be swallowing food. Garcia won the lag, broke dry, ran to the 3-ball and scratched. Martin executed a 9-ball combination shortly thereafter and took game one.

Martin broke, sinking two, ran to the 4-ball and then hey scratched, allowing Garcia to finish and tie the score. They went back and forth to a 4-4 tie before Martin began to edge out in front. By the time they moved into double digits, about midway through the race-to-17 match, Martin had established a four-rack lead. Garcia began chipping away at that lead, growing closer and closer until Martin reached the hill first at 16-15. Garcia tied it up and won the final game.

“Neither one of us quite played to our level,” noted Martin, “but it was good and everybody was happy.”

So like pool itself, Martin (and company) started out with very little experience, brought what they did know to the table and put on a good show. Moving forward, also like pool itself, they’re taking lessons from their experience and using those lessons to prepare for the next stage of growth and development. Martin will be back on the road in about a week to attend the Michigan Open (Sept. 21-24), travel to Atlantic City for the US Open (Oct. 10-16) and eventually end up in Norfolk, VA for the International Open (Oct. 28-Nov. 5).

“There’s nothing set in stone right now,” said Martin of future plans for future events at Breaktime Billiards, “but going into next year, there are definitely plans.”