Facing 4th and 8 on its own 44-yard line and trailing by 14 points with fewer than five minutes to play, Harvard (1-0, 0-0) looked to be in trouble — Merrimack (1-2, 0-0) , which was playing just its fourth season in Division I and had never played the Crimson before, was one stop away from handing the Ivy League favorites a shocking defeat in front of thousands of students who had come out to celebrate Community Night. Harvard’s streak of 20 consecutive victories in its home openers — the second-longest active streak in Division I — was on the brink.

But senior quarterback Charlie Dean completed an eight-yard pass to senior tight end Haven Montefalco, who snuck past the line to gain and kept the game alive. Then it was senior running back Aidan Borguet who broke the hinges off the door, scampering into the end zone from 48 yards away to bring the Crimson within seven and eliciting massive cheers from the crowd. With the momentum (and the crowd’s energy) having squarely turned in Harvard’s favor, the team never looked back, and when the final whistle blew, it had pulled off an improbable comeback victory to dispatch the Warriors, 28-21, in overtime. Borguet’s 25-yard catch and run on the first play of the extra period proved to be the decisive score in the incredible win.

“No matter what, we’re going to find a way to win,” said head coach Tim Murphy after the game. “Never, ever give up. And I think that’s been our mantra for a long, long time here, and these kids tonight were the epitome of that. It was pretty amazing.”

Friday’s contest marked the Warriors’ third game of the season, while it was the Crimson’s opener. The rust was evident early on, as Harvard punted on each of its first four drives, unable to get much going amid suffocating pressure from Merrimack’s talented defensive line. In the Warriors’ previous game, a 45-17 victory over Assumption, it had five sacks and 14 tackles for a loss. Merrimack picked up right where it left off, forcing Dean into tough passes off his back foot. Then, early in the second quarter, in the Crimson’s first drive into Warriors territory, defensive lineman Nicholas Lenon – who had Merrimack’s only two sacks in the contest – produced a big hit on Dean that forced the quarterback to cough up the football, thwarting a promising-looking Harvard possession and forcing head coach Tim Murphy to bring out his punting unit once again.

Senior linebacker Jack McGowan makes a tackle in the 28-21 overtime victory over Merrimack. The defense was critical in the win, ultimately holding the Warriors to -26 net rushing yards. By Josie W. Chen

“They were getting a lot of pressure on our quarterback,” Murphy explained. “They were playing almost exclusively man coverage with some real players, some really great scholarship athletes. And the combination thereof made it really, really challenging.”

In the first 55 minutes of play, it was defensive coordinator Scott Larkee ’99’s unit that kept the game competitive. Merrimack signal-caller Jack Zergiotis, a transfer from Football Bowl Subdivision (FBS) school Connecticut, was strong all day, dicing the Crimson’s secondary with quick decisions and sharp passes. Ultimately, he completed 23 of his 43 passes for 294 yards, three touchdowns, and no interceptions.

However, timely plays by the defense kept the Warriors offense in check. Precise passing by Zergiotis drove Merrimack onto the Harvard side of the field late in the first quarter, but faced with a 4th and 1 from the Crimson’s 37-yard line, Warriors head coach Dan Curran opted to challenge the second-best fourth down defense in the country in 2021. It proved to be a mistake, as junior linebacker Matt Hudson and junior defensive tackle Thor Griffith stopped Merrimack running back Matt Brehon short of the line to gain. Although the Warriors eventually produced an 11-play, 79-yard touchdown drive that ended in a slant to wide receiver Jacari Carter, the defense had a crucial role to play in creating the conditions necessary for the comeback. The Crimson had the best rushing defense in the nation last season, and are off to a good start again: Merrimack lost 26 yards overall on the ground.

Late in the second quarter, Harvard finally got on the board, aided by sloppy play from the Warriors. First, under pressure from senior defensive lineman Nate Leskovec, Zergiotis floated a deep ball to wide-open wide receiver Hayden Fisher, who was the beneficiary of miscommunication from senior safety James Herring and senior defensive back Alex Washington – but Fisher dropped it. Two plays later, a short punt by Merrimack kicker/punter Cole Peterson left the Crimson with great field position on its own 42-yard line.

Then, despite Dean’s third down overthrow of senior wide receiver Kym Wimberly, Harvard was gifted another opportunity when Warriors defensive back Garry Rosemond Jr. was flagged for pass interference. On the fresh set of downs, the Crimson was aided by another penalty, this time a roughing the passer call against Merrimack linebacker Myles Taylor. Harvard ultimately made the junior from New Rochelle, NY pay for his mistake, as Dean punched it in from the five-yard line a few plays later, sending the two teams into halftime knotted at 7.

During its win over Assumption, Merrimack won the turnover battle, 4-0, with Butler coming up with two interceptions and Rosemond adding one more. It proved to be the difference last weekend in North Andover, Mass., and it nearly proved the difference again on Friday. Against Assumption, the Warriors turned their four takeaways into 14 points, winning comfortably despite the Greyhounds gaining just 55 fewer yards and winning the possession time battle. Merrimack won the turnover battle again on Friday, as Rosemond came up with picks on consecutive drives and a poor snap by sophomore long snapper/linebacker Will Troutman.

Rosemond’s first takeaway came on Harvard’s third possession of the second half, killing any modicum of momentum that the Crimson appeared to have earned after the defense had forced a solid three-and-out. Dean’s 2nd and 13 pass down the left sideline towards Ledger Hatch was underthrown, and Rosemond came up with a relatively straightforward interception. Then, after a Merrimack three-and-out, the sophomore from Washington, DC, ended another promising Harvard drive, as he perfectly read Dean’s pass down the right sideline for another takeaway.

This takeaway proved disastrous for the Crimson, as on Merrimack’s first play from scrimmage, Zergiotis found Carter deep for a 76-yard touchdown to give the Warriors a 13-7 lead. The next possession, long snapper/linebacker Will Troutman sailed a ball over the head of sophomore punter/kicker Sebastien Tasko and bounded back to the Harvard 20, where it was scooped up by Merrimack. On the first play of the ensuing possession, wide receiver Hayden Fisher snagged Zergiotis’ pass to the left pylon after sneaking past Washington, giving the Warriors a two-touchdown lead. 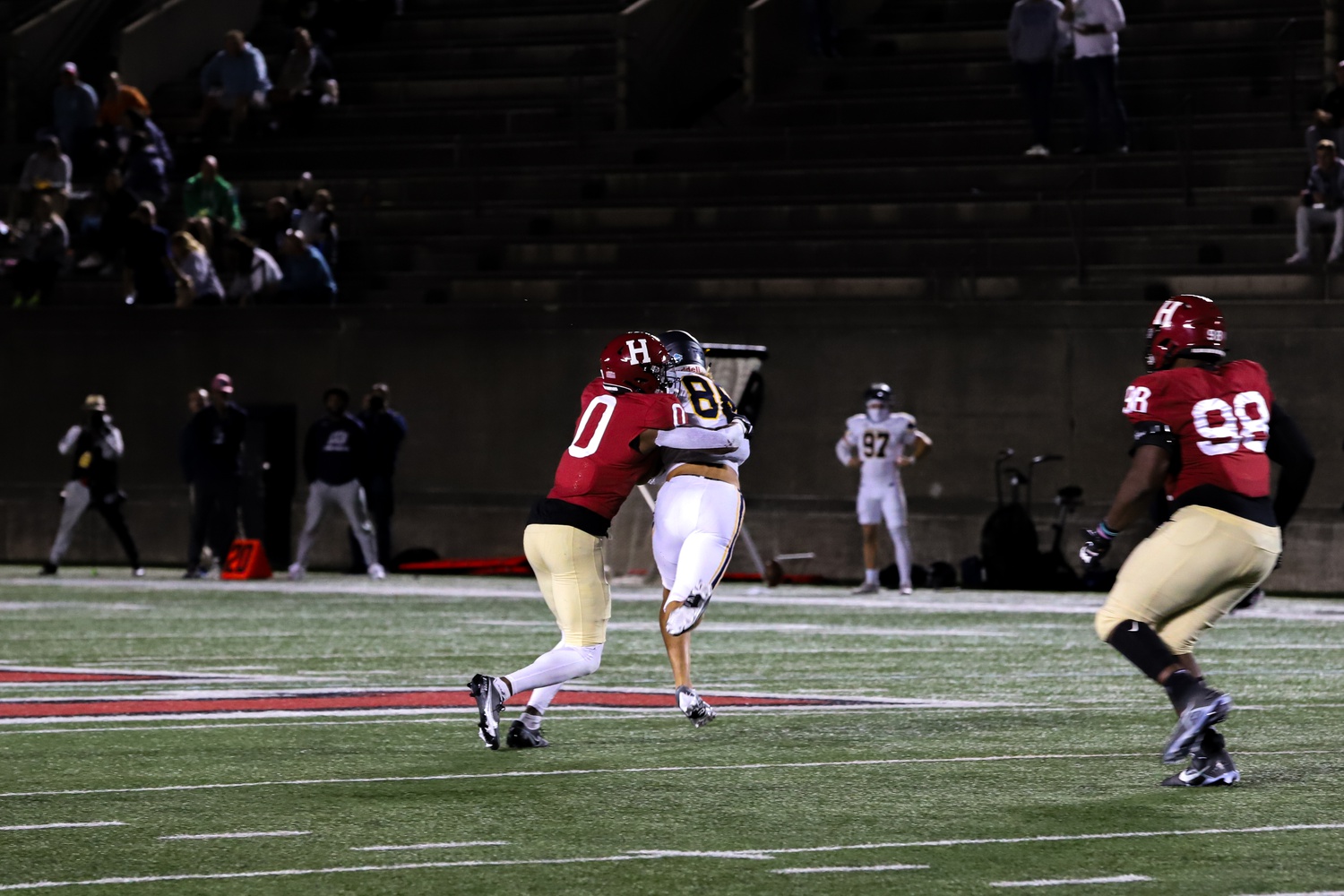 After the Crimson punted on its next drive, it became a do-or-die situation for the hosts. With the offense having been bottled up all game, Murphy, the winningest head coach in Ivy League football history, made the decision to stick with Dean instead of turning to senior quarterback Luke Emge, who started the final three games of the 2021 season after Dean suffered a season-ending injury – and won them all.

The coach’s confidence in his quarterback paid off. On the critical fourth and eight, he bought time under pressure and found a wide-open Montefalco to set up Borguet’s first touchdown run. A few minutes later, after senior linebacker Jake Brown brought down Zergliotis near the goal line, giving Harvard possession at the Warriors’ 40-yard line, the quarterback stepped up again, firing a perfectly-placed deep ball into the outstretched arms of Wimberly, who dove for the ball in tight coverage and came up with an impressive catch that sent the fans into a frenzy. The next play, Borguet hit paydirt from five yards away, sneaking in next to the left pylon to tie the game.

Then, it was the defense that came up huge yet again. On Merrimack’s ensuing possession, Curran chose to have Zergiotis run on first down, which he did for minimal gain. Then, on second down, the quarterback found no opportunities available, and narrowly escaped getting stripped, as his fumble was overturned after a ten-minute review. The suffocating pressure eventually got to the big Canadian a few plays later, as Leskovec came up with a huge sack to send the game to overtime. Overall, the Crimson had five sacks in the contest, with Leskovec alone accounting for 3.5 of them.

Thankfully for Harvard, overtime seemed to be merely a continuation of the final five minutes of regulation. The offense needed just one play to put the pressure on Merrimack, and offensive coordinator Mickey Fein dialed up the right one, a quick screen pass to Borguet on the left side. There was nothing but green turf in front of the running back, and he managed to break a tackle on the way to the end zone.

“It was what we call one of our explosives,” Murphy said. “We just thought if we could get him out, that was going to be a big play. It’s a once-a-game play, and we executed it really well.” 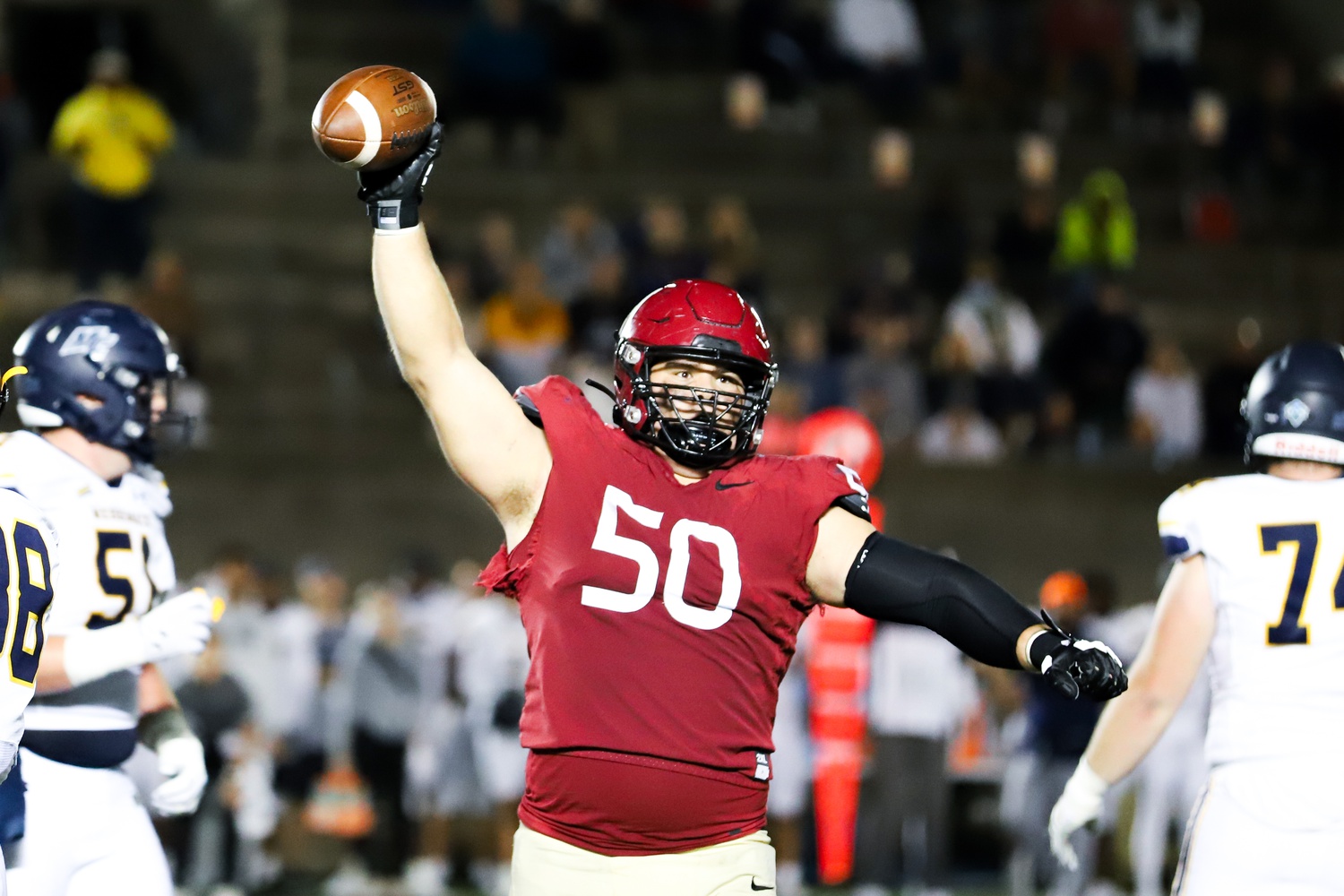 In a call that ended up being overturned, Thor Griffith recovers what he thought to be a fumble by Merrimack quarterback Jack Zergiotis. Griffith came through for a massive sack in overtime in the 28-21 victory. By Josie W. Chen

Borguet’s score left Merrimack with just one possession to drive 25 yards and win the game. The Warriors were compromised, too; Zergiotis had suffered a thumb injury late in the game, so the visitors’ hopes of pulling off an incredible upset rested on the shoulders of redshirt freshman quarterback Gavin McCusker, the backup. McCusker was looking strong, as a catch by Carter brought them to within Harvard’s five-yard line, but, just as it had all day, the Crimson front seven made three consecutive clutch plays. First, Griffith managed to get through to McCusker for a seven-yard sack. Then, Harvard stopped a run play on second down. Finally, it was Leskovec’s turn, as he brought down McCusker all the way to the 25-yard line, where the drive started for Merrimack. The game was all but over, and Washington sealed it by batting down McCusker’s desperation pass short of the goal line.

Griffith’s description of his critical sack after the game was simple: “So we called a blitz, and I executed the blitz, and then I just saw the QB right there, and I decided I had to swallow him up, and I did.”

The defensive tackle made the play sound easy, but nothing in this intense season-opening contest was. The Warriors fought valiantly, grinding it out tooth and nail until the final whistle. But after 60 minutes and two extra possessions, it was the Crimson putting on a show for its fans and leaving the field victorious, one of the most impressive streaks in college football preserved for at least another season.