For our legacy students, being a Polar Bear is a family affair. These students have at least one close family member who is an alumni of Ohio Northern. Our legacy families affirm that ONU offers a distinctive educational experience that spans generations. In part one of a three part series, meet four of our legacy families.

The Frommer family is an ONU Legacy

When Matthew and Nicholas Frommer give campus tours to prospective ONU students, they like to point out the picture hanging in King-Horn Sports Center of their grandfather, David Ingram, BS ’68, in his baseball uniform.

Growing up, Nicholas says, “I got the impression that ONU was a small, loving community that welcomed everyone, no matter what. While I have been here, that has certainly held true.”

Jennifer says that she and Michael were careful not to bias the college choice of their sons. “During his senior year of high school, our oldest told us, ‘…When I think of college, I just think ONU.’ To all of us, it’s home. We’re just so pleased to share that feeling with them, and we’ve even had the same professors in some subjects. It’s pretty great!”

Jennifer is a senior vice president at HDR Engineering, one of the largest employee-owned engineering consultancy companies in the US, and Michael is the Midwest strategic growth lead in the water business for Arcadis, a global engineering firm. The Powell, Ohio couple credit their career successes to ONU, and they are confident that ONU is setting up their sons for success, too.

Since their student days, says Jennifer, ONU’s physical campus has changed. “But what has never changed is ONU’s emphasis on each student. Each of us felt seen, cared for and supported. That’s the hallmark of an ONU education. ONU prepared us all so well—for good times and tough times—to do what we love and make a difference in the world.”

The Scatterday family is an ONU Legacy 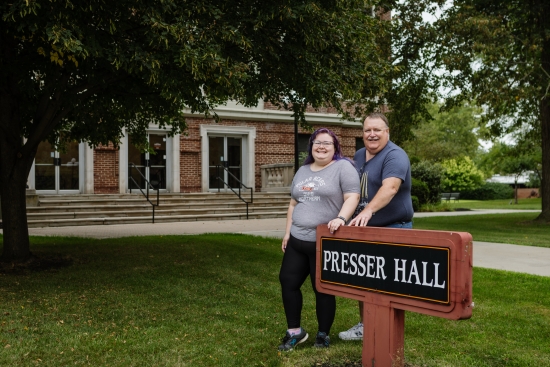 Bria Scatterday, senior music education major, followed in the footsteps of her father and grandfather when she became an ONU student. Only she traveled a bit farther than they did to attend Northern—all the way from Las Vegas, Nevada.

She chose ONU for the same reason her father did: the caring and personalized educational environment. Bria says: “All of my professors, in and out of the music department, are so invested in my future and well-being. I know that I can always count on them to help me through bad times and to celebrate with me through good times. My ONU professors and friends have become a second family to me since I don’t have my immediate family close by like many ONU students do.”

This is a big year for Bria. Her senior recital is this fall, and she will student teach and graduate in the spring. Her favorite place on campus is the Green Room in Presser Hall, where she and other music majors “make jokes, have fun, but also get homework done.”

William Scatterday, BSME ’87, who is a senior plant engineer for Nevada Energy, fondly recalls the arcade/billiards in McIntosh Center in his day. He reports that he and four or five friends would often have pinball marathons, playing all day on just $1.25. “As for what has stayed the same at ONU,” he says, “the quality of the education experience lives on—the small class sizes and access to professors who care about your success and who test your limits of your abilities to help you grow .”

The Yammine family is an ONU Legacy 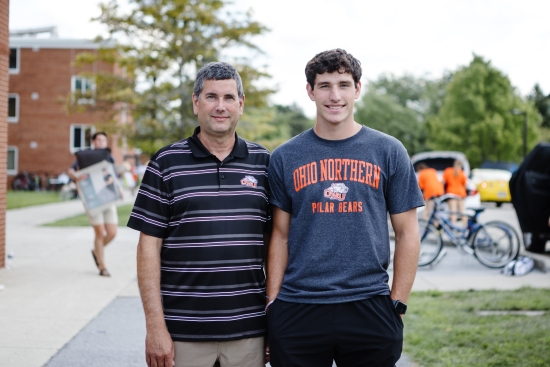 Electrical engineering student Jason Yammine followed the same path as his dad (Michael Yammine, BSEE ’89) and two older brothers (Travis Yammine, BSBA ’19, and Brandon Yammine, BSEE ’21) when he started classes at Ohio Northern University this fall . Throughout his childhood, says Jason, he learned that ONU was a small university that offered a world-class education.

Michael says: “With two sons having graduated from ONU and a third starting this semester, I like to say I have provided the ‘full circle of life at ONU.’ The personal attention that you receive at ONU is what helped attract my kids to ONU, as well as the professors who are here because they want to teach and want students to learn.”

Both Jason and Michael are impressed with the James Lehr Kennedy Engineering building. “It’s such a great new facility that I will be spending a lot of time in,” says Jason. Michael adds: “I never really had a favorite spot on campus until the new James Lehr Kennedy Engineering building was built. Now this is my favorite place on campus. Otherwise, I would say that overall the whole campus is a great place to be.”

The Yammine family lives in Findlay, Ohio, where Michael is president and chief technology officer for an electrical engineering and IT consultancy company he founded, Systems Group Technologies.

The Davis family is an ONU Legacy. 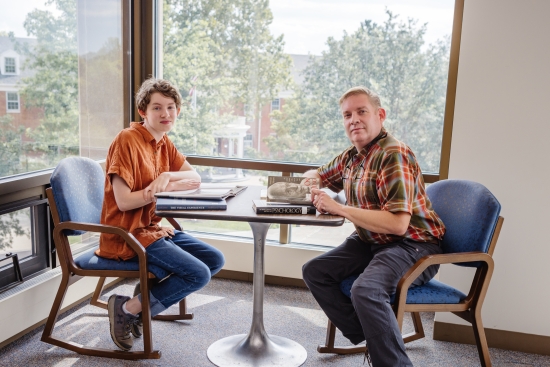 Eric Davis, BA ’94, still appreciates the impactful people he encountered at Ohio Northern as a student in the early 1990s. And today, his daughter Aubrey, a sophomore majoring in studio arts, is being mentored by equally wonderful ONU professors and staff.

Aubrey, whose favorite spot on campus is the Wilson Art Building, says: “Here you’re able to give yourself the space to deepen the knowledge of what you’re interested in, and also be introduced to and understand topics you otherwise wouldn’ t have considered.”

As a parent, says Eric, his greatest hope for Aubrey is that her talents and gifts are recognized, nurtured and respected. “Ohio Northern provided that experience for me (even when I doubted my own abilities), and I am confident ONU will provide that for Aubrey, too.”

Eric Davis is a business development and client advocate at Wessler Engineering in Bluffton, Ohio. He and his wife, Dawn, are thrilled that Aubrey chose Northern. Eric says: “I always hoped that, if I had children, one of them would choose ONU because that loyalty runs deep for me. As it goes, Dawn and I are one for one as our oldest graduated from OSU (Dawn’s alma mater), and now Aubrey is at ONU. The tie breaker will be our youngest son (no pressure, Spencer)!”