GM Magnus Carlsen had a splendid start on the first day of the Julius Baer Generation Cup, scoring 10 out of a possible 12 points with three wins and a draw. All eyes are on round six on Monday, when the world champion is paired against GM Hans Niemann.

How to watch? The games of the Julius Baer Generation Cup preliminaries can be found here. The rounds start each day at 9 am Pacific/18:00 CEST.

The Julius Baer Generation Cup is already the seventh tournament in this year’s Meltwater Champions Chess Tour, out of a total of nine events. The official leaderboard page gives the impression that the standings are based on money earned so far, and it’s Carlsen who is atop with $146,500, ahead of GM Jan-Krzysztof Duda with $100,500.

Sponsored by the Swiss private bank Julius Baer, ​​the Generation Cup has an extra twist: a new game between Carlsen and Niemann, schedule in round six on Monday at 10 am Pacific / 19:00 CEST. While the Sinquefield Cup storm has calmed down a bit, the chess world is still awaiting a further statement from Carlsen while anticipating this clash. On the first day, neither of the two players gave an interview.

Carlsen only drew with Giri and defeated GMs Arjun Erigaisi, Adhiban B., and Le Quang Liem. The game with Adhiban saw a very rare opening; White’s second move was never played before by a top grandmaster. The Indian grandmaster was under pressure for most of the game but at the end he was also briefly winning:

Niemann is one of the players on nine points, with a loss and three wins in the bag. One of them was against GM Christopher Yoo where after 24 moves it was hard to imagine anything else than a draw.

As its name suggests, the Generation Cup has players from different generations. 54-year-old GM Boris Gelfand didn’t do so well, but was still cheerful afterwards, saying: “My main struggle, I think, was that I played horribly!”

Another player from his generation did quite well. 53-year-old GM Vasyl Ivanchuk is in a shared second place after starting with a loss to GM Praggnanandhaa R. but then winning three games in a row, against GMs Ivan Saric, Anish Giri, and the aforementioned Duda.

Ivanchuk seems in excellent shape; the day before he had beaten GM Ray Robson 3-1 in the Chess.com Global Chess Championship and on September 6 he finished in shared third place in the early Titled Tuesday tournament.

In an interview with the official Meltwater broadcast, the Ukrainian legend spoke from his home in Lviv and revealed that he is playing even more online drafts than chess these days. He also commented on the war situation:

“Fortunately I am more or less safe, if it’s possible to be safe in Ukraine,” he said. “It’s not easy to go from Ukraine to another country and I am a man in the category between 18 and 60 so I am staying at home and I hope [the] war will finish as soon as possible. People who can think logically, need to do something to stop this nightmare because very young people are killed for nothing.” 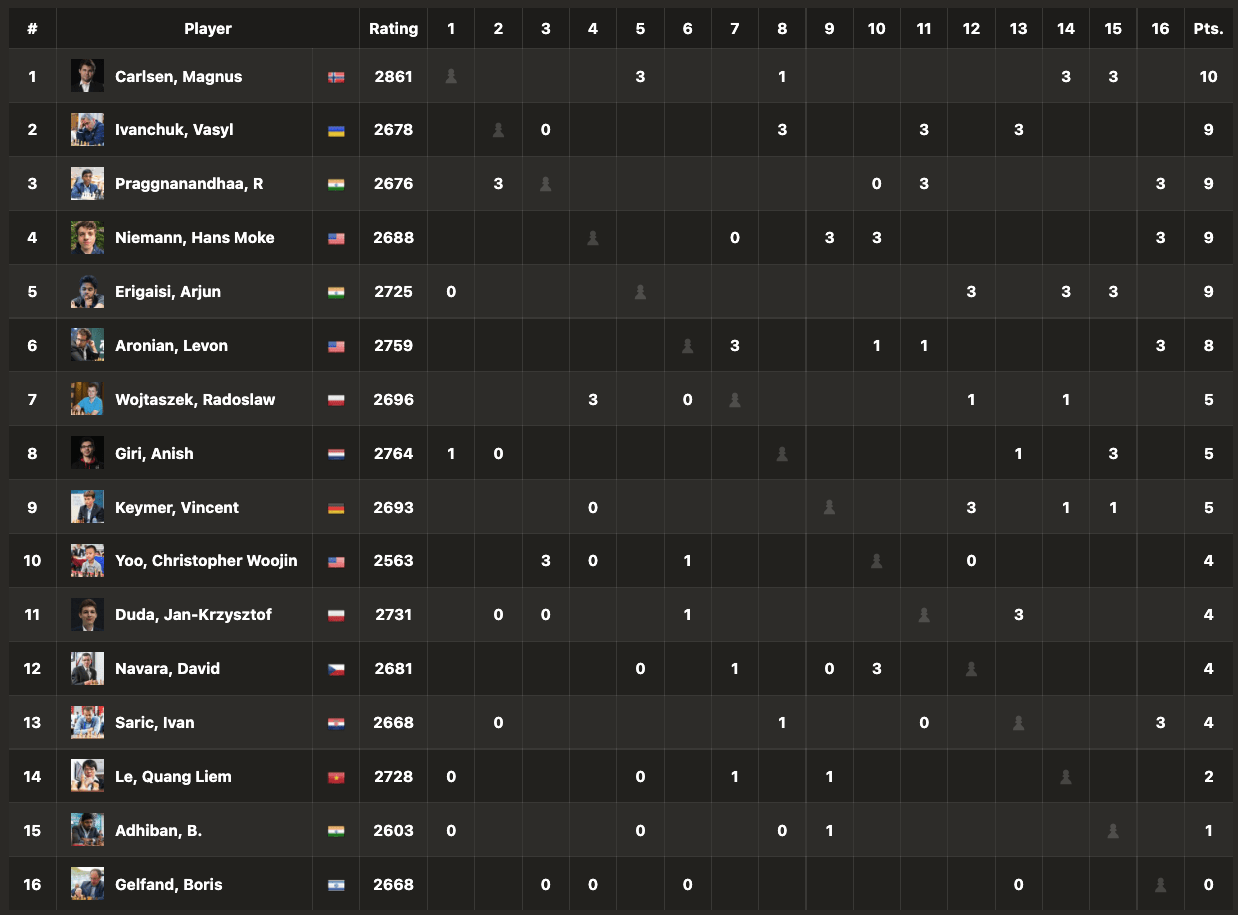 The 2022 Champions Chess Tour’s seventh event, the Julius Baer Generation Cup, takes place September 18-25, 2022 on chess24. The preliminary phase is a 16-player rapid (15|10) round-robin. The top eight players advance to the knockout phase that consists of two days of four-game rapid matches, which advance to blitz (5|3) and armageddon (White has five minutes, Black four with no increment) tiebreaks only if a knockout match is closed after the second day. The prize fund is $150,000.