– The fight for the various titles will continue at the Nevers Magny-Cours circuit, in three weeks time, from 7 to 9 October 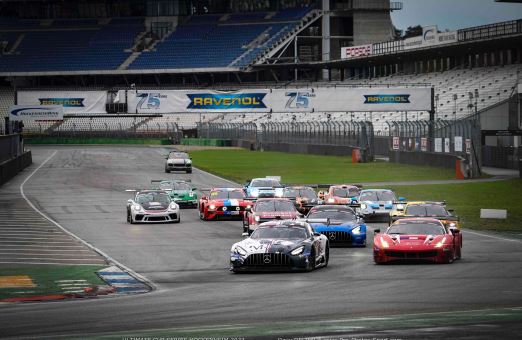 It was under cloudy skies that the drivers took their places on a somewhat damp starting grid for the 4-hour race at the Hockenheimring, the scene of the fourth round of the KENNOL GT Endurance Cup.

Even though the risk of rain seems to have been ruled out on Sunday morning, the wet tires are being fitted to the leading cars, starting with the n°83/Racetivity Mercedes AMG GT3 and the n°2/Visiom Ferrari 488 GT3 Evo on the front row, ahead of the n°88/AKKODIS ASP Mercedes and the n°31/AB Sport Auto Renault RS01.

The strategic aspect already present during these endurance races, given the 5 compulsory pit stops to be made, with different penalties for balancing the teams to be respected, will undoubtedly be reinforced by this tire management on a track that is drying out lap after lap.

While the n°83 Mercedes-AMG retained the pole advantage over the n°2 Ferrari 488, the latter was given a drive through in the first few minutes for cutting the pit lane after the keel, as was the case with the n°31 Renault RS01.
Charles-Henri Samani, who was alone in the lead after a controlled start, suffered a technical problem with the n°83 Mercedes. By the time he got back to his pit, the time lost was considerable, especially as this car remained immobilized for almost 30 minutes in order to solve the electronic problem on the accelerator pedal. 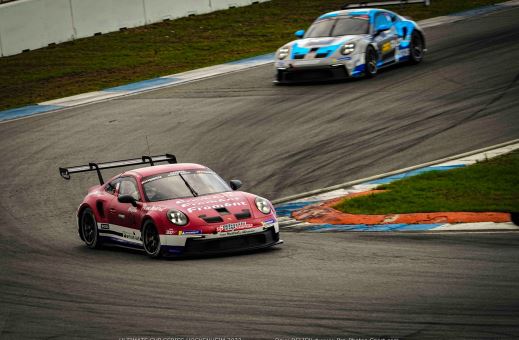 The setbacks suffered by the protagonists of the UGT3A category benefited the n°94 Porsche 911 GT3 Cup, leader of its category and now leader of the overall classification. At the wheel of the n°2 Ferrari and after having served his penalty, David Hallyday climbed back onto the leading Porsche and managed to overtake it easily to take the lead for the first time in this race.

The n°88 Mercedes, which was 3rd in the overall classification, was free of any problems until then, but suffered a puncture on the left rear shortly before the end of the first hour. All the cars in the UGT3A category thus suffered a mishap at the start of the event.

Jean-Paul Pagny and Jean-Bernard Bouvet took turns at the wheel of the Ferrari n°2 at the top of the hierarchy and continued to increase their lead at mid-race. At the beginning of the last hour, the Italian car was ahead of its rivals, starting with the Mercedes n°88 of Nicolas Chartier and Vincent Capillaire, then the Renault n°31 of Rémy Kirchdoerffer and Jonathan Cochet. However, there were still compulsory pit lane stops to be made on both sides, with the minimum time much more favorable (18 seconds less) to the Mercedes than to the Ferrari. 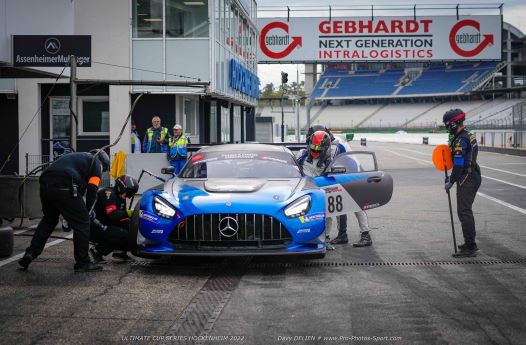 At the end of the fifth and final stop, David Hallyday was leading the way in the No. 2 Ferrari, just eight seconds ahead of Vincent Capillaire and the No. 88 Mercedes. The 2019 Ultimate Cup Series LMP3 Challenge champion closed the gap on the leader, corner after corner, and made a successful attack with 12 minutes to go before the checkered flag. 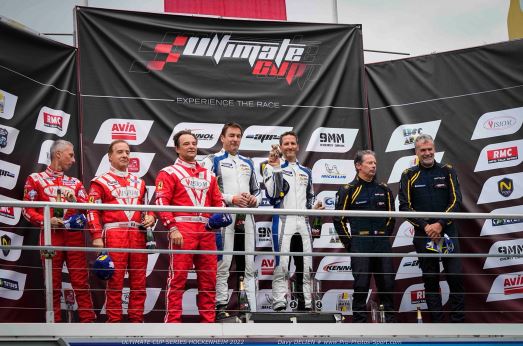 The #88 Akkodis ASP Mercedes-AMG GT3, driven by Vincent Capillaire and Nicolas Chartier, won for the second time in a row after Misano, after 125 laps. The German GT car, which set the fastest lap in the race in 1:38.929, was 15.6 seconds ahead of the n°2/Visiom Ferrari 488 GT3 Evo.

With this 2nd place, Jean-Paul Pagny, David Hallyday and Jean-Bernard Bouvet reduce the gap in the UGT3A championship against the duo of the n°83/Racetivity Mercedes-AMG which saves the furniture with the 4th place of the category, 15 laps behind the winners.

The overall podium was completed by Rémy Kirchdoerffer and Jonathan Cochet, in the n°31/AB Sport Auto Renault RS01. 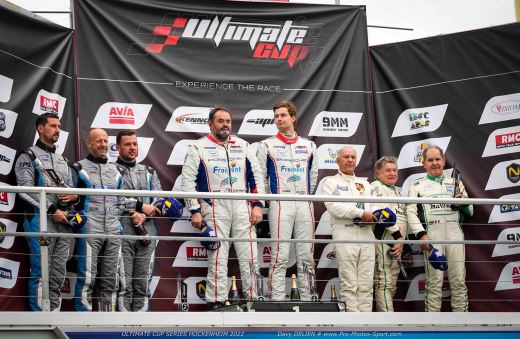 The Porsche Cup category was dominated head and shoulders by Joffrey Dorchy and Julien Froment. The drivers of the n°94/Martinet by Alméras Porsche 911 GT3 Cup can claim to have led the race overall for no less than 27 laps against the UGT3.

They finished 5 laps ahead of the n°89/PR Racing Porsche, whilst the second Martinet by Alméras car finished on the third step of the Porsche Cup podium. 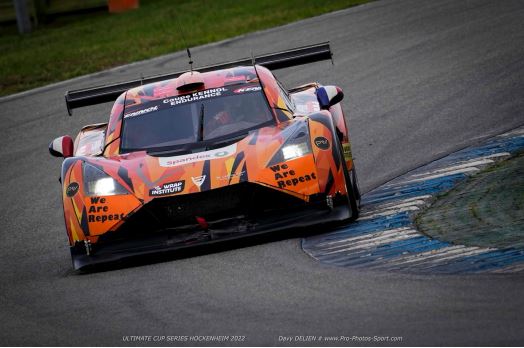 The race of the Vortex n°701 was far from being a long quiet river despite the new success in UGT3B. Vincent Congnet, Philippe Bonnel and Lucas Sugliano were delayed for several minutes, as were their rivals in the n°55 Marc Mustang of VDS Racing Adventures, who finished the event in last place. 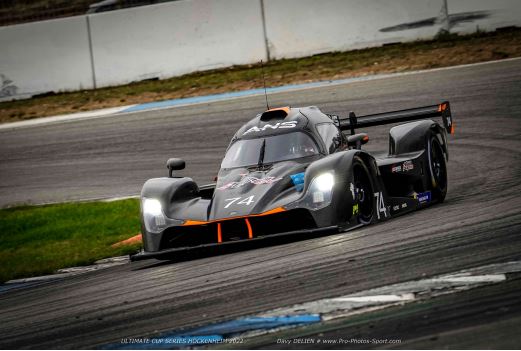 Since the beginning of the season, the Proto Endurance races have always had their share of surprises. Sunday’s 4-hour race at the German Hockenheimring was no exception to the rule, with a series of twists and turns right from the start!

While we expected a battle between the two Ligier JS P320s of the Graff, which started on pole, and the n°23/Pegasus, the first turn decided otherwise. Indeed, the n°16 Ligier and the n°99 Norma CN/Nerguti Compétition collided in this first turn, causing trouble in the pack.

At the wheel of the n°23 Ligier, Julien Schell was already in the lead before this first braking and didn’t have time to understand what was happening in his mirrors, except to see the n°74 Nova Proto NP 02 of ANS Motorsport now behind him. However, the race was neutralized for the first time due to the large amount of debris in the accident area, as the two badly damaged prototypes returned to their respective pits. 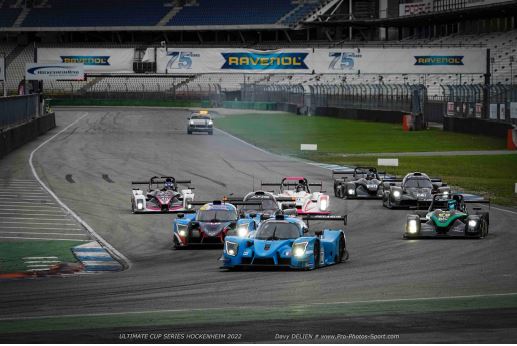 From then on, the n°23 Ligier, first driven by the boss-driver of the Alsatian team, then relayed by the young Thibaut Ehrhart, dominated the debates by remaining solidly in the driver’s seat, far from the problems encountered by some of his comrades.

At the beginning of the last hour, the n°23 Ligier had every reason to believe in victory, especially with a two-lap lead over the n°74 Nova Proto NP02. But with still two stops out of four to respect on both sides, the race is far from being over. And for good reason, at the end of the last pit stop made by the n°23 Ligier, less than 30 minutes before the presentation of the checkered flag, it is the NP02 which invites itself in the lead of the race.

Led by Nicolas Schatz, multiple French Mountain Champion and excellent circuit driver, in the money time, the NP02 prototype will fly away to a first victory. Nicolas Schatz’s team-mates, Enzo Chiocci and Pierre Courroye, played a very important role in this success by maintaining an excellent rhythm throughout the race to allow the team leader to confirm at the most appropriate moment. Presented at Estoril, last November, the Nova Proto designed proto scored its first success of its young career in the world of endurance racing. 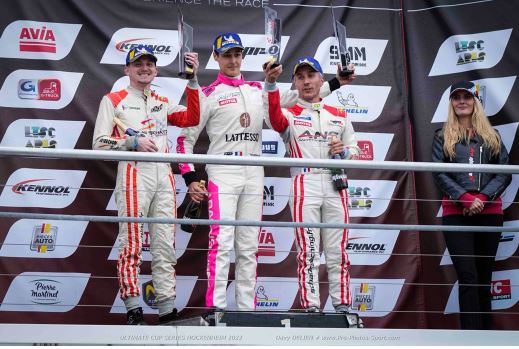 Thibaut Ehrhart was unable to do anything but can be satisfied with the work he did in the #23 Pegasus Racing Ligier JS P320 in his second race of the season.

The Alsace-based duo finished second overall, one minute and eight seconds behind the winners, but won the LMP3 class two laps ahead of their main rivals, Jacopo d’Amato, Lucca Allen and Fabrice Rossello, in the #16 Graff Ligier. 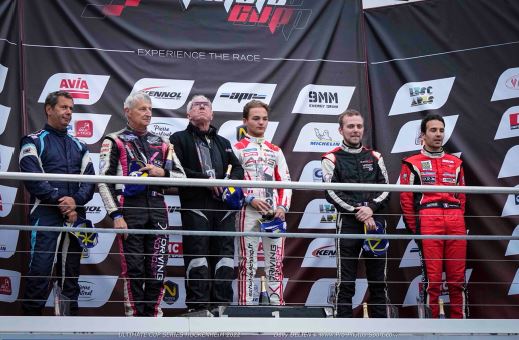 ANS Motorsport took a double victory on Sunday in Germany, taking the honors in the CN category thanks to the brilliant race won by Frédéric Crouillet and Mathys Joubert in the n°72 Norma. Palmyr and DB Autosport completed the podium in the category.