The MLB baseball playoffs will start this Friday. I would love to give you the matchups, but as of this time they are still undetermined. I will say this like I do every year, there is nothing better than playoff baseball!

I can tell you I will find myself pulling for the underdogs and smaller payroll teams. The American League I will be rooting for Seattle, Tampa Bay and Cleveland to head to the World Series. I will be rooting against the New York Yankees as I do every post season. I miss the years of the Detroit Tigers knocking the Yankees out of the post season.

The National League I find myself rooting for the San Diego Padres for some odd reason. I don’t want to see the LA Dodgers go to the World Series. You have seen enough of the LA Dodgers in the playoffs. The LA Dodgers’ payroll is astronomical, so I would love to see them lose. I say, let’s get this playoff action started.

The college football top five almost had a shakeup this past weekend. The Georgia Bulldogs — ranked No. 1 in the country — trailed Missouri for three and a half quarters. I really thought the Missouri Tigers were going to pull off the shocker of the 2022 college football season. However, like the good teams do, Georgia found a way to win the football game. 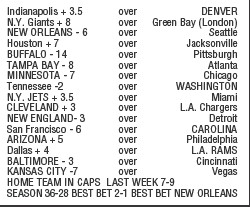 The Alabama Crimson Tide pulled away from Arkansas in the fourth quarter to win with their star quarterback Bryce Young hurt on the sidelines. I say, Arkansas missed a stellar opportunity to pull off the upset with Young out of the football game. The Alabama team just has so much depth at every position.

The Michigan Wolverines went into Iowa and were very business-like winning 27-14. The Wolverines scored on four of its first five possessions. The running of Blake Corum, with a solid 133 yards rushing, was once again impressive. The Wolverines snapped a four-game losing streak at Iowa. The Wolverines will now travel to Indiana as a three-touchdown favorite to defeat the Indiana Hoosiers football team. The Fat Guy prediction: Blue and True 31 and A Basketball School 13.

The Michigan State Spartans were defeated by Maryland 27-13, handing the Spartans a third consecutive loss. The Spartan offense could not muster up any offense in this contest. The Maryland defense pitched a second half shutout. I can tell you this, the MSU football team will need to be near perfect this weekend as the Ohio State Buckeyes come rolling in. The Ohio State offense is fabulous, and the Spartan defense is not, which could pose some problems for Sparty. The prediction: Scarlet and Gray 48 and Four Straight Losses 17.

I think the Seattle Seahawks just scored again and it’s Tuesday morning! I ask, how many times does an NFL team score 45 points and lose?

The answer is not very many! The Lions defense allowed Hall of Famer quarterback (bahhaha) Geno Smith to go 23/30 and 320 yards last Sunday. I say, what? Geno Smith? Yes, the answer is Geno Smith for cripes sake.

How about this one: Running back Rashaad Penny had 17 carries for 151 yards! The Fat Guy pulled out his calculator and it said that equals 8.9 yards per carry! How ridiculous and embarrassing is that I ask? The Lions had a game at home they should have won, and they let a bad Seattle team leave town with the victory.

This is what agitates me to pull my hair out with this Lions football team. The “Cryons” will never change in my lifetime. I could watch a men’s adult flag football game and see less points than the Lions gave up. I mean, come on defense, show some “Lion’s Pride” and be accountable. This was as embarrassing as it gets if you ask me!

The Lions hit the road this weekend and will take on the New England Patriots. The coaching staff is a huge advantage for the Patriots. I mean the “Hoodie” or Dan Campbell I ask? Alex, I’ll take the Patriots for all I can in that coaching matchup. The prediction: Bradyless Pats 27 and Swiss Cheese D 20.

I can be reached at thefatguy@mihomepaper.com.